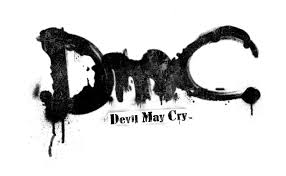 DmC: Devil May Cry has been a source of controversy for fans of the Devil May Cry series. Â Apparently, whether Dante looks like a white haired anime character is more important to fans than whether the gameplay is fast, smooth, and most importantly, fun. Â The fact that the game was developed by Ninja Theory of Heavenly Sword and Enslaved fame instead of an in-house development team at Capcom like previous games in the series didn’t help either. Â I will be the first to admit that I didn’t mind the changes as much as fans of the series did. Â This is mainly because I have no emotional attachment to the franchise. Â My only experience with the franchise is playing a little bit of Devil May Cry 4 and never playing more than that.

The only reason I didn’t play more from the series wasn’t due to lack of interest but more due to the fact that I never got around to it. Â When this reboot wasÂ announced, many fans were angry at the changes being made with the most controversial change being Dante’s design change. Â While I wasn’t really excited for the reboot necessarily, I also wasn’t enraged with the changes being made to the game either. Â It just seemed like gamers were more concerned with the aestheticsÂ than how the games played. Â After playing the game for myself, I can safely say that it is a dynamic and satisfying action game. 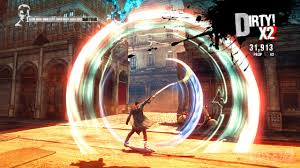 In Limbo City, demons secretly manipulate humanity through the comforts of life. Â However, humans are unaware of this due to the demons living in aÂ paralleled plane called Limbo. Â The game’s main character, Dante, is constantly hunted down by the demons and is warned by the femaleÂ phychic, Kat, that he is in danger and is pulled into limbo. Â Kat is a member of “The Order”, a mysterious organization that are intent on stopping the demons’ control of the world. Â The leader, Vergil, asks Dante to help them stop the demons after revealing that they are brothers. Â To stop the demons, they need to bring down the Demon King Mundus.

The story is definitely the weakest point of DmC as while it is relatively straight forward, it is brought down by flat, uninteresting characters and weak dialogue. Â There was definitely some potential for a good story here but it comes really short of reaching it. Â It also doesn’t help that while serviceable, the voice acting is relatively lackluster as while it doesn’t really ruin any moments in the story, it doesn’t really elevate it either. Â There is also the detail that the game does not seem to know what the definition of Nephilim is. Â According to the game, they are the children that are made from the parents being both an angel and a demon. Â However, a fast Google search reveals that they are said to be children born from the coupling between and an angel and a human. Â While I’ll admit that is something of a nitpick, it feels really bizarre that the developers managed to get this wrong when a quick search on Google could have helped them with this. 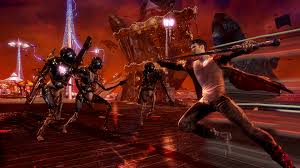 Sorry about that ranting there. Â Just had to get that off my chest. Â Anyway, the story isn’t where the game succeeds. Â It’s the gameplay itself that makes DmC. Â The combat is very dynamic and a lot of fun with many combos to pull off. Â Pulling off several different combos in succession also adds to your style points, which you gain depending on the different skills you perform. Â There are multiple weapons to use in combat which are used depending on the buttons pressed. Â The default weapons are the sword, Rebellion, and the pistols, Ebony and Ivory.

However, if you pressed either of the trigger button on the controller, you’ll also be able to use two additonal weapons. Â The left trigger put’s Dante in Angel Mode which let’s him use the speedy scythe type weapon, Orisis while the right trigger button puts him in Devil Mode which allows him to use the slower but more powerful, Arbiter. Â Both Angel Mode and Devil Mode also affect Dante’s mobility as they give him the ability to pull himself towards enemies and to pull his enemies towards him, respectively. Â They also can get Dante to various points in the level as well as pull objects towards him. 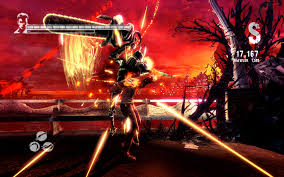 There is the style points I mentioned earlier. Â You gain them by pulling off combos and dodging enemy attacks. Â These points determine what ranking you get at the end of each level in addition to the number of items used, number of times you died during the level, and the amount of time in took to clear the level. Â You can get a ranking as high as SSS and as low as a D. Â However, I will admit that it is pretty easy to get a relatively high ranking in the levels as I never got a ranking lower than a B. Â DmC is not really the most challenging action game in the world so if you like extremely challenging action games, this one probably won’t do anything for you.

There is also the expected regular series ability known as the “Devil Trigger”, which enables Dante to use certain special abilities depending on the weapon he is currentlyÂ wielding. Â In addition to this, hisÂ strengthÂ and speed are increased and his health starts to slowly restore itself while in this mode. Â The Devil Trigger does come across as disappointing due to the fact that DmC is not all that difficult of a game to begin with and it only makes the game feel easier.

DmC also includes platforming sections where missing the edge will result in Dante taking a small amount of damage. Â There is also the new addition of changingÂ environmentsÂ as during certain parts of the game, Â Dante can reach hidden parts of the level using the whip and grappling hook. Â Also, the environment will sometimes attack Dante byÂ changingÂ its architecture andÂ infrastructureÂ into a more hostile form, which requires the player to guide Dante through these now hostile environments without getting him killed. Â The platforming can sometimes can across as a bit sloppy Â as it can sometimes be difficult to gauge how far the jump is, especially during the more tense sections of the game.

Throughout the levels, you can find different keys that will grant you access to hidden optional challenges in the game that will give you different objectives in order to clear the level. Â However, I couldn’t find a way to get out of these challenges without beating them which is confusing to me. Â This is probably nitpicking but I still thought it was worth pointing out. 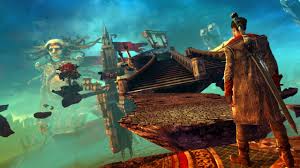 The visuals in DmC are quite solid. Â The uses of colors is nice and fits with the style that the game is going for. Â I will admit that the “Hot Topic” look of the main characters really doesn’t do anything for me but that;s just a personal preference. Â The background music, which consists of metal and rock music, fits the scene and manages to work with the action on screen. Â The voice acting is listenable but fairly lackluster as I have already mentioned.

DmC: Devil May Cry is definitely one of the most controversial games that have been released this year as many fans of the series made several complaints about the game not being challenging enough and the changes made to the characters. Â While these are valid complaints and I will admit that DmC is not the most challenging action game. Â However, as some one who hasn’t played that much of the series before, I have to say that I really enjoyed the game as while it is by no means perfect, it still manages to succeed in being aÂ stylizedÂ action game and deserves my recommendation.