On this episode, the guys look back at their first cars, Adam and Tanner drive two modern supercars, and Pawn Stars ride the Suzuki.

The guys meet up outside a high school in Los Angeles, bring with them their first cars when they were teenagers. Tanner arrives first with a 1985 Honda CRX. Adam arrives next with a 1987 Dodge Aries K. Rutledge arrives last in a 1981 Volkswagen Rabbit Pickup Diesel. The guys would put their first cars up against each other in a series of challenges to see who had the best first car. The guys would have to drive 60 miles to get to their next destination. Tanner did a reverse donut in the CRX. Rutledge did donuts in his Rabbit while tray-sliding. Adam wanted to get in on the fun and tray-slid with his Aries and crashed into a tree. Minimal damage was done to the Aries. The guys discuss why their cars were the perfect first car for a teenager. The guys talked about their lives as teenagers and how they got their cars. The guys arrived at their first challenge. Adam and Tanner parked their cars so Rutledge could not get out of his Rabbit. Rutledge escapes through the window and dents Adam’s hood.

The first challenge is for each guy to get his car up to 30 mph and let go of the steering wheel. The cars would then have to drive straight through the Alley of Junk. This test how straight the cars could drive without using the steering wheel. The car that hits the least amount of junk wins. Tanner went first and he knows that his car pulls to the left. The CRX went 30 feet before veering into the Alley of Junk. Â The CRX lost part of the passenger panel right above the front right tire. Rutledge went next and drove with his knees. He cheated and went straight through the Alley of Junk without hitting anything. Adam went last and Tanner says that the Aries veered to the right. The Aries veered to the right and hit a bunch of junk. Adam hit more junk than Tanner and lost. Returning to outside the Top Gear US Hanger and Tanner says that Rutledge cheated. Rutledge says he was merely protecting his Rabbit. Adam tells Rutledge, “You disgust me!” Adam says he could not look at Rutledge and would rather look at a Chevrolet Corvette ZR1. He says this car is the ultimate dream first car. Tanner says that the ultimate dream first car is a Ferrari, and he is standing next to a Ferrari 458 Italia.

Adam says the Corvette ZR1 is the ultimate dream first car while Tanner says the Ferrari 458 Italia is the ultimate dream first car. The episode is outside a diner in the desert. Both guys arrive and Tanner tells Adam that he has brought a dull spoon to a gun fight. Adam says the Ferrari is a night at the opera while the Corvette is a bar fight. The Ferrari goes up to 202 mph and the Corvette goes up to 205 mph. The Corvette has chrome wheels, which Adam says is a little Jersey Shore-ish. They are Snooki wheels. Tanner says that the Ferrari has more technology in one wheel than the Corvette has. Adam proposes a drag race, which Tanner says he is not going to do a drag race in a Ferrari. Tanner says the Corvette as 100 more hp than the Ferrari. Adam says to repeat that statement, then Tanner agrees to have a drag race. Adam talks about the 60 year history of the Corvette. The Corvette has a supercharged 6.2L V8 pumping out 638 hp. It can go from 0 to 60 mph faster than a Lamborghini Gallardo and it is American made. Adam says that it is a supercar on paper, but he would not have one for everyday driving. Adam says you can’t see the edges of the car. You have to go at an angle to get over speed bumps and the interior is subpar. Tanner is driving a 458 indoors and says it might possibly be the best supercar ever built. Tanner says that Ferrari put together the technology from 31 F1 titles into one positively flawless package. Tanner says the twin-clutch system on the Ferrari is very good. The 458 costs $250,000. It goes from 0 to 60 mph in 3.4 seconds. Tanner says that he cannot get enough of the 458 as it revs up to 9,000 rpm. The shifting is fast and smooth. After driving on a curvy road and insulting each others car, it was time for a drag race. First one to reach a sign wins. Adam has wheel spin of the line and it costs him. The Ferrari wins the drag race. Commercial Break. The show returns to the hanger as Adam admits that it was his fault, and not the Corvette’s fault, that he lost to Tanner and the Ferrari. It is time for each car to do a lap with the Stig. The Stig makes a sky diving entrance, which is a cool way to get to the track. He gets in the Corvette first and goes around the track. The Stig also did a lap in the Ferrari, which was not shown, in 1:23.3. Tanner reveals the time for Corvette, which is 1:22.4, 0.4 seconds slower than the Viper ACR.

The show returns to the first car challenge. The guys receive their next challenge. To prove which car is the easiest to drive, each host would have to teach a young teenage boy without a drivers license how to drive their cars. The teenagers look just like the host would look like if they were in high school. The teenagers would have to navigate through a course. First guy to finish wins. The hosts break the ice by talking about girls. Two of the cars are manual, and the teenagers have never driven a manual. The Aries has the advantage for being an automatic. The CRX and Aries have no problems of the starting line. The Rabbit stalls of the line. Â The CRX parks in the box. Mini Tanner slams the brakes as Tanner’s head hits the windshield. The Aries is the first to finish the course, followed by the CRX. Mini Rutledge has problems with Rabbit and Rutledge has him run over cones.

The episode return to the test track as Rutledge is introducing the Big Star Small Car segment of the show. Rick and Chumlee from Pawn Stars are this week’s guests. Both guys say they are the better driver. Rick goes first in the Suzuki. Rick is trash talking. Chumlee went next and struggles with his lap. He is swearing as he messes up. The guys walk up to the stage and are interviewed by Rutledge. Rutledge asks if any weird cars have been brought in to the pawn shop. Rick says that someone has brought in a 1931 Lincoln LeBaron. Rutledge is not familiar with the car. Rick kept a 1940s coupe that someone brought to the shop. Rick says he bought the car for $4,000 and spent $100,000 fixing it up. Chumlee says he kept a Buick Regal that someone brought to the shop. Chumlee confesses that he put hydraulics on the Regal. Rick’s first car is a 1973 Volkswagen Thing. Chumlee’s first car was a 1993 Geo Metro. He left it on the side of the road three months later. Chumlee now drives a Maserati Gran Turismo and a Range Rover. Rick now drives a Porsche Panamera S. The lap times were revealed. Rick went around the track in 1:48.1 and Chumlee went around the track in 1:51.5.

The final challenge is to see how safe the cars are. The cars are strapped to a cord and are pulled towards each other at 25 mph for a combined crash speed of 50 mph. The winner will be the one that drives away. The guys are talking trash. The show goes to commercial as the cars are pulled in. The CRX took the most damage, with three wheels on the ground. The fourth wheel is on its side. Tanner says that if the CRX is that safe, he would not want his kid to drive it. The Aries and Rabbit took minimal damage. The rear window of the Rabbit was destroyed though. The Aries suffered the least amount of damage. Tanner was somehow able to drive away in the CRX, but he says he is going to leave his car at the track. The Aries and Rabbit could run and circled around the CRX. Tanner was left at the track with his destroyed CRX and Adam and Rutledge drove off. Back at the hanger, Tanner says the only the CRX lost was because it was too fast. Adam and Rutledge argue about who won.

Overall, This was a good episode by Top Gear US standards. The result of the drag race was not what I expected. I expected the Corvette to win the drag race and the Ferrari to have the faster lap time. On Top Gear UK, the Ferrari 458 Italia was over a second faster around the track than the Corvette. On Top Gear US, the Corvette was almost a second faster around the track than the 458. The jokes were ok, but not funny. The funniest bit was the Big Star Small Car segment. Chumlee and Rick were very funny, but Rutledge seemed like he was just reading of the card. Compared to the previous episode, the interaction among the hosts as not that strong. The coolest part was the Stig’s entrance. I don’t remember UK Stig ever jumped out of a plane. I know that the UK Stig has been transported on a trolley, a box, and has gone through baggage claim. And we get to learn a little bit about the hosts by their first cars. Rutledge is a good old Southern boy. Tanner is a boy racer. Adam likes cars driven by old people.

Final Verdict: 7 Stigs out of 10. The Stig’s entrance was awesome. The drag race was interesting. The Pawn Stars guys were entertaining. The challenge was decent. Rutledge is a cheater. Adam cannot do drag races. The interaction among the hosts is what prevented this episode from becoming a great episodes. 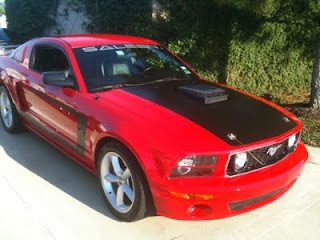