On Episode 9, the guys travel through Alaska to find America’s toughest truck.

Warning: Spoilers are in the review

Segment 1: The guys pick their trucks

The guys had to blindly buy a truck that had over 150,000 miles and cost $3000. The guys meet up in a forest just north of Anchorage, Alaska. Adam is a can of bear mace and several bear bells. I think someone is afraid of bears. The guys then see their trucks for the first time. Rutledge bought a 1997 Dodge Ram 1500 for $3000. Rutledge could fit his head between the top of the tire and the bottom of the fender. The guys joke that Rutledge’s head is a unit of measurement. Tanner’s truck is revealed as a 1983 Chevrolet C/K 10 Stepside. Tanner thought he had a diesel engine, but he opened the hood only to see a small block Chevy 350 cubic inch engine. Adam bought a 1976 Ford F-250. Adam’s truck was in the worst shape. The guys were told that if their trucks broke down, they would be riding in a 1993 Toyota Hilux.

Â The first challenge is a breaking test. Each host would get his truck up to 30 mph and slam on the breaks when the truck reached a marker that was 30 feet from the lake. The goal was not to get the truck into the lake. Adam stopped 5 feet from the lake. Tanner stopped 2 feet from the water. It was Rutledge’s turn. Adam and Tanner moved the marker closer to the lake. Rutledge ended up in the lake. The guys were given an envelope and were told to drive 100 miles to Fairbank while driving the toughest terrain in America. The guys talk about their trucks while driving to Fairbank. The guys get to a truck stop and Tanner comments that Rutledge’s truck was too new. Tanner and Adam ram into Rutledge. The guys were told that they would be spending their last night in a hotel near Fairbank. The guys would have to spend the rest of the episode in the wilderness. So, they went to a workshop and modified their trucks into bush-ready campers in one night.

Tanner was the first to reveal his modification. He built his camper in the shape of a spoiler. Tanner had a bed, coffee, and few other things in his spoiler camper. Rutledge reveals his camper. He added a log cabin on the truck bed with a slot that opens for his feet when he is asleep. It also had a porch ,a welcome mat and a stoll for someone to sit on the porch. Rutledge has a minibar, a stove, a Daniel Boone hat, and a few other items. Rutledge’s cabin is not secure to the truck and it is not rigid. Adam revealed his truck camper. He went with a no-bear theme. His camper is a cage welded to the back of his truck. Adam got a picture of a lion to scare off bears. He even has a speaker that makes lion noises. He even has an escape hatch. Adam and Rutledge did not prepare for rain. The guys are driving and realize their modifications have affected the aerodynamics of their trucks.

The guys arrive at Fish Creek, a 20 mile proving ground created by nature. The must cross water to get there. Adam got stuck in the water, and the Hilux reared its head. Rutledge crosses the water. Rutledge pulls Adam out of the water. Adam gets his truck running again. The guys must climb up a mountain. The guys reach an Alaskan skid pad. The skid pad was mud and water. Rutledge got stuck in the mud. Tanner tried to get around Rutledge and got stuck. Adam got Rutledge out of trouble. Rutledge tried to talk Adam out of helping Tanner. Adam gets Tanner out of the mud. The guys make it to the top of Fish Creek. The guys set up camp and talk trucks. The all go to bed.

Segment 5: Trek to a Glacier

The guys would have to travel from Fish Creek through a river valley and reach a glacier. Whoever got to the glacier first while his truck was still running won and his truck would be named America’s toughest truck. While Rutledge is using the toilet, Adam and Tanner make animal noises through the walkie talkie. Tanner and Adam drive by while Rutledge is still using the toilet. The guys hit up a steep vertical climb. Adam snapped his driveshaft on the rocky terrain. His Ford had died and he was forced to drive the Toyota. The Dodge and Chevy still remained. While driving uphill, Rutledge’s cabin fell off the truck bed and Tanner ran over it. The guys set up camp and use the wood from Rutledge’s cabin as firewood for the campfire. The guys leave camp and continued their trek to the glacier. The guys did not have a trail to follow and had to create their own path. The guys drive through muddy water. Rutledge’s driver window did not roll up all the way and he got muddy water on him. Tanner’s hood would not stay down. The guys were speeding towards the glacier. The speed caused Rutledge’s battery to become loose and the Dodge stalled. Rutledge fixed the problem and got the Dodge to start again. The guys has to cross a river, and the Dodge stalled in the water a few times. Rutledge got it to run until it finally died. Tanner was the only one who had a working American truck. Rutledge said his final words to his truck, which he named Chuck Norris. Since Rutledge’s Dodge died, he had to join Adam in the Toyota. Since Rutledge just lost his truck, he was the one to drive the Toyota. Tanner had to touch the glacier with his truck. He realized he was not just representing Chevy, but he was representing every truck that came out of America. If Tanner failed, the Toyota would be crowned America’s toughest truck. Tanner made it to the glacier area, but he still needed to touch the glacier with his Chevy. Tanner backed his truck into an iceberg from the glacier, claiming victory. The guys proved that Chevrolet made America’s toughest truck.

Overall, this was an above average special. The jokes were either hit or miss. The challenge was tough and I was surprised that any of the trucks made it to the glacier. But the Top Gear UK road trips were funnier, and the British hosts have better chemistry than the American hosts. Top moments are Tanner reaching the glacier and Tanner running over Rutledge’s cabin. The chemistry between Adam, Tanner, and Rutledge improved over the season. On Top Gear UK, only once did a host have his car die during a road trip. In Alaska, two trucks died on the trip.

Final Verdict: 6 Stigs out of 10. This Episode is available at www.history.com 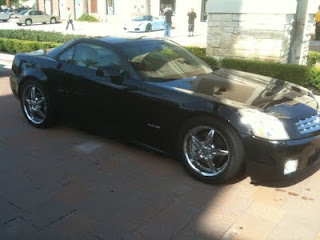