Lotus is known for making rear-mid engine sports cars with incredible handling. In 2009, Lotus started production on a rear-mid engine, rear-wheel drive, two-door, two-seat or 2+2 seat sports car in 2009, the Lotus Evora. The Evora uses a different platform from the Elise and Exige. The Evora earned EVO Magazine’s “Car of the Year 2009,” CAR Magazine’s “Peformance Car of the Year 2009,” and Autocar’s “Britain’s Best Driver’s Car 2009” awards.

I first saw the Lotus Evora at the 2011 Houston Auto Show and at the October 2011 edition of Houston Cars and Coffee. It has good styling, but the styling is not as aggressive as the Exige styling. It is a little bit longer than the Elise and Exige. It can come with 2+2 seating arrangement, but only small children could fit in the rear seats. The Evora also weighs 3,000 lbs, which is 1,000 lbs. more than the Exige.

Final Thought: This is another great car from Lotus. It is one of the fastest cars to wear the Lotus badge. It is a little bit longer and about 1,000 lbs. heavier than the Elise and Exige, but the Evora still handles very well. Lotus continues its tradition of performance, styling, and handling with the Evora. With what comes standard in the Evora plus the performance and the handling, $65,000 is a good price. The Evora S is overprice at $81,000. The Evora S acceleration to 60 mph is only 0.3 seconds quicker and only goes 10 mph faster than the standard Evora. The addition of a supercharger should not cost $16,000 if it slightly improves the performance of the car. The Evora is a good buy. One should get the Evora S if he or she needs a car can be used as a weekend car and as a track day car.

Photo taken from a camera phone and a digital camera. 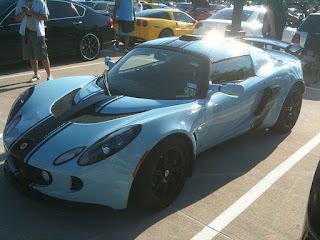