Hey, do you like kids? Well, too late, because this is a movie about a kid. Okay, it is about the life of kid in a family trying to get by in a town in the Philippines. His name is the same as the title of the movie: Magifico. Somehow, I was under the impression that Filipinos had trouble pronouncing the letter â€œFâ€, but I guess that if that was no impediment to them keeping the name of their country the same, then it could not stop them from enjoying this movie. 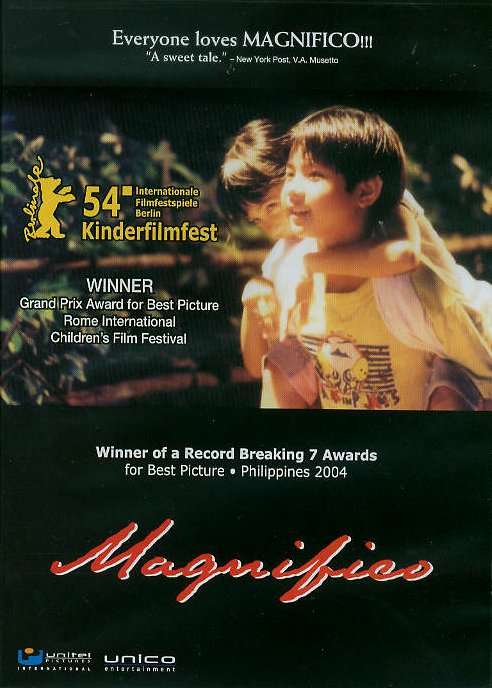 Magnifico is a boy of around ten-years. He tries to stay upbeat and kind to everyone, but he is not exactly living the good life. His family is working class poor. He is not doing particularly well in school, and his parents have almost given up on his potential in academics. He dotes on his sister, Helen, who is a little younger than he is and has cerebral palsy. It is said that she can speak, but she doesnâ€™t, which frustrates her mother, Edna.

Problems just pile on top of each other when the elder son returns home. Miong was the hope of the family, but he has lost his college scholarship and has to figure out another way of helping the family. Grandmother Lola, who was on the roof helping kids when Miong returned, falls off of the roof and has to go to the hospital, where doctors find that she has terminal cancer. Lola is grief stricken. Not only has she been rendered unable to sew and give massages as she used to, she feels like she has become a complete burden on her family in sickness and will continue to be a burden even when she dies. While the parents try to make ends meet as best as they can, Miong decides to take advantage of the knowledge that Isang, the daughter of his fatherâ€™s boss, has a crush on him, in hopes of getting money out of her.

This movie isâ€¦a little emotionally manipulative, and could have slipped into forced woe-is-me depressing territory pretty easily if not for the main character, Magnifico. Magnifico, or Ikoy as many call him (probably because â€œIkoyâ€ does not have letter â€œFâ€ in it), makes up for his lack of booksmarts or knowledge of the world with some pretty practical ideas. When he learns how expensive it is to pay for a funeral, he tries to build a coffin for his grandmother. He gets his neighbors and associates of his family to chip in items for the ceremony, but tells no one except for one of his friends about his actual plan. At the same time, he tries to get a wheelchair from a man who no longer needs it (it was for his mother who recently died) so that he can use it to take his sister to the fair when it comes to town. All in all, Magnifico does all that he can to help his family, and a little bit to help others in the town.

A main theme going through the movie is obligation, particularly family obligation. Pretty much everything that Magnifico does is due to feelings of familial obligation towards his grandmother and sister, though he does start trying to help an elderly woman living at the cemetery (who gets teased a lot by other kids) when he learns that she has no family left. He does not feel pressured into doing it and does not even think of questioning why; it is just what is done and what he is to do. If he cannot help in one way, he tries to find another way. While Magnificoâ€™s thought process leads to good deeds, Miong goes down a darker path, stringing an innocent girl along and pretending to love her in hopes of getting money from her later on. He does this out of desperation to provide for his family, being the eldest son who had already failed college, but his seemingly cynical attitude towards Isang gives all of his actions a somewhat despicable bent. Grandma Lola is unhappy that she can no longer help her family, and tries to do her best to not make things difficult for them.

Another theme throughout the movie is one of potential. Miong was thought to be so bright, and the parents were pinning their dreams on him. When he fails college, he turns to a desperate and pretty unethical scheme that he probably did not think through very well. Magnifico, on the other hand, is thought to be stupid. Even his father, Jerry, outright calls him stupid to his face at least once. Magnifico, however, is always thinking. He always has ideas. The problem is that he has little understanding of numbers and he sometimes has difficulty understanding why things are as expensive as they are. Limited resources mean that certain things that he does prevents him from doing other things that he wants to do. His mission to provide for his family is made difficult not just by the outside world, but by his own intellectual challenges. Magnifico recognizes his faults as things that he needs to overcome, or at least bypass. This can lead to some creative lateral thinking. It is pretty impressive to see him overcome his disadvantages and sometimes use them to his advantage. And finally, his determination to see the good in others tends to make their good sides come out, at least eventually. Whatever the other townspeople think of what he is doing, they all seem to think of him as a good kid.

From sounding depressing to sounding saccharine, I did not really mention how funny this movie is. There is subtle humor about Magnifico simply not understanding numbers and quantities, but it does not go overboard into broad, demeaning, or patronizing humor. There are some laughs gained by the fact that people are always talking and talking, which becomes pretty funny during a funeral scene. Surprisingly, there were no real jokes at the expense of Helenâ€™s cerebral palsy save for the in-universe teasing by Miongâ€™s friend, who is not really shown in a positive light anyways.

I have to say that I found the acting to be quite impressive. For the most part, it was low-key and naturalistic, dipping into melodrama only on rare occasions. Even those playing stock characters made them seem real. The kids in particular, I liked. Ikoy, his friend, Helen, and even the supporting kid characters. They all seemed like they were just kids, not kids play acting in a movie. Oh, and the actress who played Helen is also a singer now. She had to pretend to have cerebral palsy at age eight and not make a joke out of it.

While I liked the characters and the acting, some of the movie was unpolished. Overall, the movie does not look or sound like it was made in 2003. If anything it looks like it was made in 1983 at the very latest. Sometimes, the music seems awkward and there is one scene where there are drums that come out of nowhere. Without providing spoilers, there were two pivotal scenes in the movie where the actions of the characters did not make sense in terms of space and time, and better editing or direction could have fixed that easily. And I never warmed to Miongâ€™s storyline. Maybe I wasnâ€™t supposed to warm to it, but it never seemed to fully form. It seemed like it was supposed to be some sort of social commentary or a reflection on Ikoyâ€™s story more than a legitimate story in its own right. Still, these are small problems that I have about a movie that is really quite good.

This is a story of life in the face of death, of togetherness in the face of separation, of hope in the face of despair, and of resourcefulness in the face of poverty. Magnifico, whether he realizes it or not, leaves a mark on his community along with his family. And while the movie ends with some story strands left hanging, I get the impression that the family, still poor, will be okay. And sometimes, that is as happy an ending as is needed.

What more do I need to say about the movie? If you can get past the picture and sound quality of the movie, and maybe some questionable physics, then you may very well find a movie that will make you laugh, cry, and smile while cheering one a young boy who just wants to do the right thing. This movie is sweet without being too cloying, and it is dramatically engaging with only a little bit of emotional manipulation. Without question, I definitely recommend this. And if you hate kids, you still might like it.