So, Spike Leeâ€™s remake (or re-adaptation) of Oldboy is coming out in two weeks, so the logical thing to do is for me to make a blog post about Park Chan-wookâ€™s movie, Oldboy. The thing is, I didnâ€™t like that movie. So this is a Park Chan-wook movie concerning someone else named Lee: Lady Vengeance. 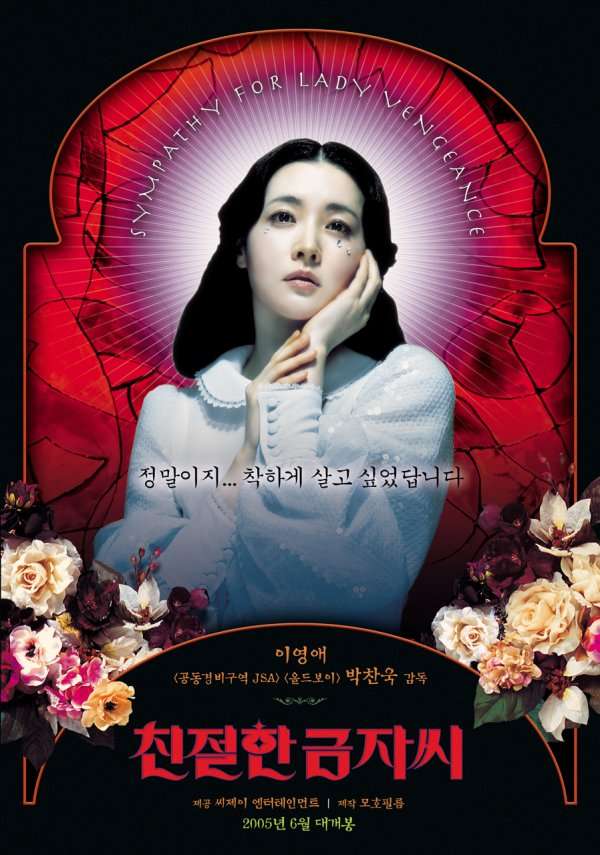 Geum-Ja the Kindhearted is being let out of prison after over 13 years, having helped to kidnap a child and falsely confessed to his murder. She is greeted by a group of Christians in Santa outfitsâ€¦oh, hey, maybe I should have waited until next month. They are singing and cheerful as Geum-Ja walks to them, but not so much when she deliberately tips over the ceremonial get-out-of-jail-and-start-your-life-off-pure tofu cake and insults them. In other words, she is not so kind-hearted.

Geum-Ja meets a former prison mate and there is a flashback to the start of their friendship. There are quite a few flashbacks in this movie; some of them inform the viewer about the past, while others are a little misleading. The friend gives her a place to stay, but Geum-Ja is too busy thinking of other things to show gratitude. She is thinking about vengeance. Vengeance upon the man who actually committed the murder, vengeance upon the man who made her confess, vengeance upon the man who stole her daughter from her. And she had started her plan thirteen years ago. She dreams of the man, a dog with the face of a man. She dreams of taking him to a snowy cliff alone and shooting him in the head and having the bullet penetrate his entire body. Vengeance will be hers. But first, she has to go to the boyâ€™s parents and cut off one of her fingers in front of them. All of the money that she earned in prison goes to reattaching that finger. To get money, Geum-Ja finds a job making cakes. She even strikes up a bit of a casual relationship with one of the workers at the cake shop, noting that he is the same age as the murdered boy would have been.

Geum-Ja meets another former prison mate to whom she had donated a kidney. The request that Geum-Ja gives to this friend and her husband is a little less clear-cut than asking for a place to live. As the rest of her plan goes forth and more people are shown to be involved, it soon becomes clear to the audience and to Geum-Ja that this is no longer just about her quest for personal vengeance. Her motives may be obvious, but her plans are not. And, eventually, her motives themselves end up also changing a little as she realizes the story is bigger than just her.

This movie is the third movie in the â€œVengeance Trilogyâ€, though it is connected to the other two only by the theme of vengeance. In terms of style and tone, it is somewhere in between the sparseness of Sympathy for Mr. Vengeance that so many found boring and the overstuffed and pseudo-operatic hyperactivity of Oldboy that (among other things) I outright hated. Perhaps it is somewhat closer to Oldboy in style, but it holds back. There is more of a dreamlike quality even beyond the actual dream sequence.

I could talk about the motivations of various characters, a few possible plot holes (would she would have gotten her daughter back if she recanted her confession at any time?), a couple of the more disturbing scenes, and maybe touch upon the awkward use of English in parts of the movie. But those are a kind of spoilery. Instead, I will talk about Geum-Ja and Jang-Geum.

Sixteen months before this film was released in South Korea, the final episode of Jewel in the Palace aired. I talked about it in my previous post, focusing particularly on the character of Jang-Geum in the second half. That was the last piece of work that Lee Young-ae had done as an actress before Lady Vengeance. This was her last performance ever, though there is speculation that she will reprise her role on Jewel in the Palace. While Lee had worked with director Park Chan-wook before in Joint Security Area five years earlier, Lee was most likely best known at that time for playing Jang-Geum. Park must have known this. I do not remember whether Lee was Parkâ€™s first choice for the lead role in making Lady Vengeance. If she was not, then there must have been multiple edits to the script, because there is no way that anyone else could have played the role of Geum-Ja, not the way that it was presented. On paper, Lee may have seemed to be completely inappropriate for the role, given what she was best known for at the time. Yet, the decision is not simply a matter of playing against type; her work on the show and her image informed her role in the movie. Whether or not the movie itself is good (I like it), the role was perfect for Lee Young-ae. And since it not only arrived upon the heels of Jewel in the Palace, but was the last thing Lee starred in during the past eight years, it is almost impossible to cleanly separate the two roles if one has seen both.

A simple look at the first few minutes of the movie makes it clear that Park was milking Leeâ€™s image for all that it was worth. People are shown being happy for her. She is helpful around the prison, coming to the aid of other prisoners in big ways and small ways. She inspires others with her speeches on redemption. She is called Geum-Ja the kindhearted. Later on, the movie hammers in that sense by portraying her in a completely unrealistic light as if she is some sort of heavenly being. But all of that is a lie. She is gaining favors with others or simply manipulating them into helping her later on; putting on an act so that she can be released on good behavior. Once she is on the outside, she is often aloof, mean, sexual, violent, and still manipulative. All of these things must have been jarring towards those who had watched her as Jang-Geum for fifty-four hours. This was all purposeful.

At first glance, there may seem to be no similarities between Geum-Ja and Jang-Geum other than their names. Yet, there are so many. Both suffered greatly and wrongly. Both were determined and willful. Both sacrificed for others. Both are good at cooking. Both were helpful towards others, which brought them friends and allies. Both harbor secrets for reasons both obvious and not so obvious. And both were motivated, in some respects, by vengeance and guilt. One could make the stretch that, in confronting a child-killer, Geum-Ja retained the moral high ground, as Jang-Geum did. I wouldnâ€™t, but one could. In a sense, Geum-Ja is not the opposite of Jang-Geum, but an extremely twisted version of Jang-Geum. Maybe a parody of Jang-Geum, though not really. Thanks to a great mistake in her youth, a relatively innocent Geum-Ja was thrust into darkness. Her innocence was soon shattered and all that was left was a manipulative shell.While Jang-Geum inspired others to do good, Geum-Ja brought others into her quest for vengeance, bringing down other innocent and not-so-innocent people into the world of violence, just as she had been brought down.

Geum-Ja is constantly looking for redemption, but she knows that she cannot achieve it without blood, both hers and of the murderer. She wants redemption on her own terms or not at all. That is why she rejects the tofu cake in the beginning. It is arguable that her heartless killer persona in the outside is no more genuine than her angelic savior persona was while in prison. That thought may be reassuring towards those who see her as Jang-Geum, but that cannot justify the acts of murder and torture, even upon evil people. And she knows that her hands were already unclean when she agreed to take place in the kidnapping, and that her quest for vengeance is not without a hint of irony. She is desperate for forgiveness and to be worthy of such, but there is a sense that she knows (particularly with a later revelation) that she does not deserve it and that it will never come anyways. Avoiding spoilers as much as I can, that is my interpretation of the ending.

Last year, I read that the movie is going to be remade. http://collider.com/charlize-theron-sympathy-lady-vengeance-remake/214286/.There had actually been talk about this four years ago http://www.ign.com/articles/2008/03/14/charlizes-vengeance, but now it seems more serious. And Charlize Theron is in the lead role. Charlize Theron. Really? Nevermind that my father arrived in the United States at a younger age than the â€œvery Americanâ€ Theron did and has been here much longer than she has. Theron may not be the WORST choice for the lead role, but I think that she is a terrible choice for the role. Sure, on paper, it sounds fine, but look at my previous post about Jang-Geum. Does any of that sound like Theron? The casting of Lee Young-ae was brilliant in its counterintuitiveness and inappropriateness; the movie played it up so much that no one else could have filled the role. Casting Theron has the exact opposite effect. It is safe and uninspired. Those are not terms that bode well for any movie, let alone remakes. Even if you knew nothing about Lee or about Jewel in the Palace before watching the movie, you definitely know something about Theronâ€™s previous work. Then again, could any well-known Hollywood actress between thirty and thirty-five bring to the role anything close to what Lee did? Rachel McAdams is the only person who springs to mind, though she is not exactly American either. But, at least she is not Charlize Theron. I know that a movie should stand on its own and not depend on other material that is, technically, unrelated. And maybe the remake will turn out fine. Still, there is a whole dimension of the original movie that will be lost. 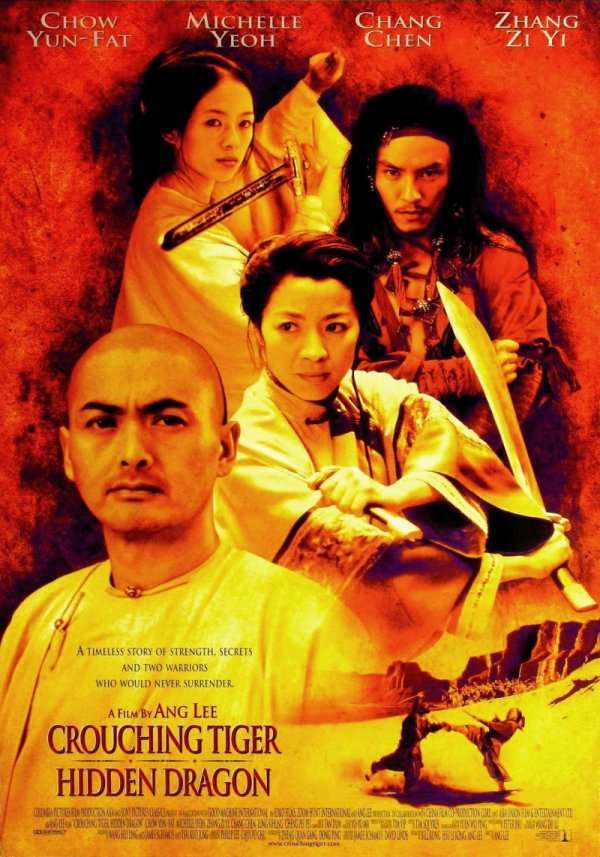 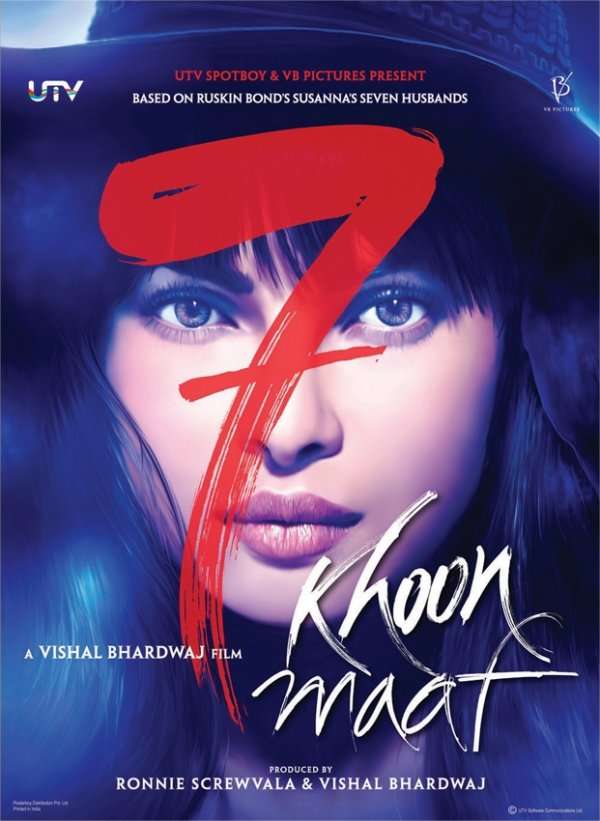