Family: the most important part of the Asian social block. The thing that Mako in Pacific Rim killed for. This week on WTF ASIA, I present I Like It Hotâ€¦or Hellcatsâ€¦aboutÂ threeÂ women at different points in their livesÂ eachÂ struggling to deal with the difficulties of romance and of family members. There is a lot of screaming and swearing; itâ€™s great. 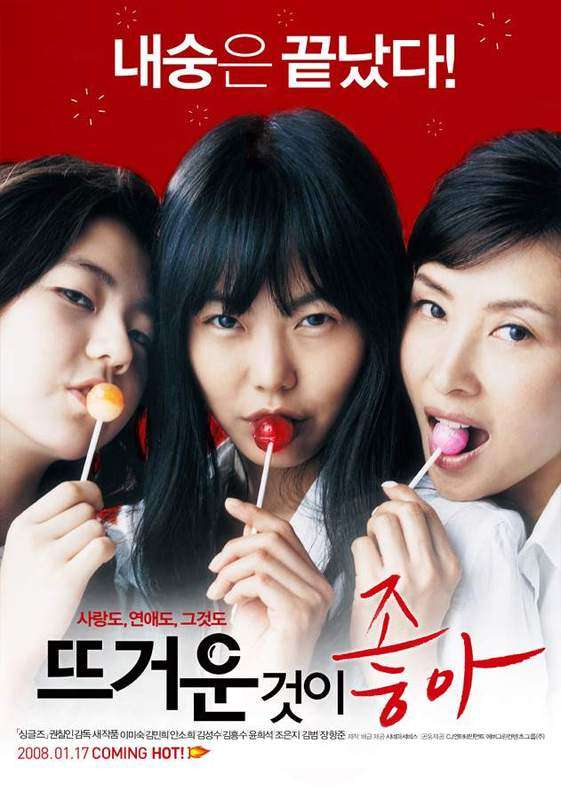 Kim Ami is 27 years old. She is currently living with her forty-something older sister Young-Mi and teenage niece Kang-Ae. Of course, Amiâ€™s living there was supposed to be only temporary and her continued presence has already heightened tension between her and the other two. Ami, a struggling screenwriter, is working with a director who is pretty much as unsuccessful as she is in the movie business. He and a producer have been making her rewrite her script repeatedly for the past year, and she has grown to hate both of them. Ami is full of dreams and ambition, but she is going nowhere, and having Young-Mi and Kang-Ae constantly insult her and treat her like a burden is not helping. Young-Mi is an interior designer who likes her independence and being in control. If only her daughter would stop acting out and if only her sister would stop being a bratty mooch who has lived with them without paying rent for the past three years. Kang-Ae is a teenager, struggling to cope with living with her overbearing mother and her pathetically out-of-control aunt while being too young to break free of them.

The day after Amiâ€™s birthday, she is set up on a blind date with a really boring 32-year-old accountant named Seung-Won, even though Ami already has a boyfriend. Amiâ€™s boyfriend is Won-Seok, an aspiring musician who is cheating on Ami. She discovers that little tidbit about him right after the date. Yay. So, she dumps Won-Seok and goes on a drunken bender with her friends, who abandon her as soon as she finds that Seung-Won is drinking at the same place. They have a drunken hookup (well, she was plastered; I am not sure about him), but it seems to be leading to something more. Seung-Won seems to be everything that Won-Seok was not; he is stable, dependable, and successful. He makes her want to become a better person; a new person. But what does that mean? She unsure whether she is ready to become what she feels that she needs to be. And when Won-Seok comes crawling back to her, simply turning her back on him again proves to be not quite as easy for her as it probably should be. Is she getting closer to Won-Seok again or is she simply trying to pull away from the stifling structure that Seung-Won represents?

Young-Mi has recently landed a job working as a designer for a play. She manages to catch (inadvertently?) the interest of a young actor named Kyeong-Soo and the two begin a relationship. Not wanting to be tied down and having grown cynical about love and romance (along with pretty much everything else), Young-Mi states in no uncertain terms what the relationship means to her. She treats him coldly and even giving him money, as if he is merely a boytoy to her Sugar Mama. She thinks that she is really too old for him and too old for such puppy love anyways. It is pretty clear, though, that Kyeong-Soo wants something more out it, which perplexes, amuses, and exasperates Young-Mi. Apparently, she has not met John Choâ€™s character from American Pie. Soon, however, she finds something out that makes her rethink her life and her approach to it.

Kang-Ae has been dating Ho-Jae for three years, yet he has not made a move toâ€¦wellâ€¦anything. In fact, Ho-Jae does not seem all that interested in her. Kang-Aeâ€™s friend Mi-Ran, apparently considering herself to be a woman of the world due to having lived in Brazil, tries to give Kang-Ae tips on how to seduce Ho-Jae. The results of Kang-Aeâ€™s initial efforts are embarrassing, but she ends up finding out something that she may not have fully acknowledged before.

While this is a story about the three women, Ami is really the main character. She gets the most screen time and the most character development. She also gets to be the narrator and have an internal monologue. Young-Mi and Kang-Ae are interesting characters too, but they seem to ultimately serve Amiâ€™s story in a way that is never really made explicit. It may have been nice for their stories to have been as fleshed out as hers, but I think that there is a reason why Amiâ€™s story was in the forefront. And while her story, unlike the other two, could have theoretically stood on its own, the inclusion of the other two storylines provides a greater context and another dimension to her story that is never explicitly spelled out. Through their three separate stories, there is the implication that, as long as the characters are alive, their stories are never truly over, regardless of the when the movie ends, and that it is never too early or late to find out something new about oneself.

Through the lens of love and relationships, the movie explores change and possibilities. What can be and what could have been. What does it mean when something is no longer possible? Is that a reason to mourn and mope or an opportunity to explore what you never considered before? When something unexpected comes along, will you retreat into your shell, embrace it full force, or test the waters a bit? How much is the need to sacrifice real and how much is in your expectations of yourself? What can you set aside for while pursuing other goals? What must you grab right now before it disappears? Is it okay to let it disappear, even if you donâ€™t know if it will ever return? Can you truly let go of a part of your life? Does that break need be permanent? Can you tell whether how you are now is what you will always be or if your current state is just temporary? How much does changing what you do and how you do it change who you are?

This is not to say that that these questions get brought up directly or get fully explored. That would be a bit of a slog to watch. This is not that kind of movie. This is, for the most part, a light comedy drama with contrived coincidences, little flights from realism, undeveloped characters, and narrative shortcuts. For the most part, the story is predictable, but there are a couple of pleasant surprises. Perhaps all of those questions that I posed in the previous paragraph simply manifested by accident or were just in my head. Still, I found it interesting watching the movie again with the questions in mind.

One thing that I found interesting was how the three main characters never really confide in each other when it comes toâ€¦well, anything. Not even towards the end. They talk about love and their love lives at times, but it is mostly vague and more general thoughts about how love is this or that. This may seem a bit problematic to some viewers, particularly regarding one story development, but it kind of fits with the characters. They are more content to bicker about other things and tiptoe around the issues of their love-lives. Also, some families are just not that good at or used to confiding in each other so deeply. Young-Mi and Kang-Ae know about Amiâ€™s ex-boyfriend and new boyfriend, but not really due to Ami telling them much. While storylines are too flimsy to stand on their own, they are still largely separate from Amiâ€™s story. Some of this may be due to the need for each of them to figure out for herself what she wants and what she should do. Some of it may be due to their simply being at different stages of their lives and not feeling like the others truly understand what they are going through, let alone be able to give advice. Some of it may be due to their not knowing what to say or even where to start. Some of it may be due to their ending up irritating each other before any conversation can get to specifics. Some of it may be due to their being rather private and independent, despite sharing the same space. Still, while they may not necessarily pour their hearts out to each other, they are still family.

I donâ€™t know if I am making this movie seem deeper than it really is, but I do think that it is possible to slip in some deeper questions about human nature, existence, and behavior, in a lighter story in a subtle manner, as opposed to certain other movies with heavy handed symbolism. Maybe that is not necessarily the case with this movie, but it helps me enjoy it on multiple levels. Even without that extra layer, it is a nice little movie about love and family and how people grow as people.