So, did yâ€™all see the trailer for the American Oldboy movie? Yes? No? Well, whatever. This is Sympathy for Mr. Vengeance. 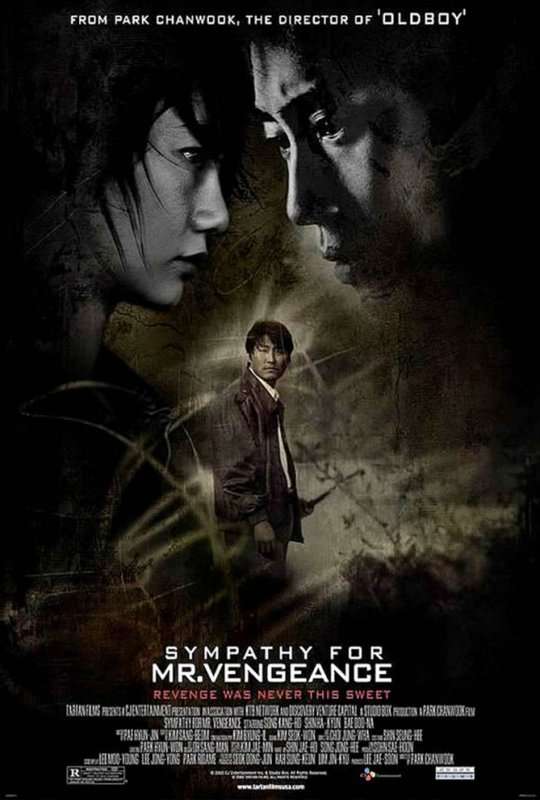 Yeah, I donâ€™t know what is with that tagline. â€œRevenge was never this sweet?â€ Really, the only sweet part of this movie is in the very beginning. A radio show is playing some melodramatic music as the radio host is reading a letter written by our protagonist, detailing his plight. Ryu is deaf and mute, meaning that he is able to listen to the radio show only through his older sister whose name escapes me now. As we watch a flashback to the siblings as children, Ryuâ€™s letter says that his sister had been working to put him through art school, but got sick due to a failing kidney. Ryu quit school and now works at a factory. Despite his sister preferring him to just let her die and go on with his life instead, Ryu decides to save her, no matter the cost. We see his sister shedding a tear listening to the host reading the letter while leaning on Ryuâ€™s shoulder as they look out at the city from the roof of their apartment. She smiles. He smiles. How lovely. It seems as if this is going to be a story of how siblings struggle through the worst of times and become stronger people as a result. And then the music ends.

The cost, it turns out, is the kidney from someone who is not him. Ryu has the wrong blood type. So he continues his boring life at his noisy and boring job, coming home to his sister in their noisy apartment surrounded by noise. It seems as if there are only three things that bring him enjoyment in life: taking care of his sister, being with his girlfriend, and venting out his anger at the batting cages.

For reasons that are unspecified, Ryu gets let go from his job. Kind of unceremoniously too; when he hesitates before shaking hands with a higher-up, the guy just gets up to go get lunch with someone, pretty much forgetting that Ryu existed. Desperate, he decides to contact a group of underground organ traffickers, who apparently have little qualms about posting advertisements in public bathrooms. He agrees to give up one of his kidneys in exchange for a kidney appropriate for his sister AND pay the group a bit of money, pretty much all that he has. I have to say, these people seem to be a bit shady. When he returns with the money, the brains of the operation tries to inject herself with what may very well be heroin and Ryu has to help her. She and her cohorts thank him by taking his kidney, taking his clothes , and taking everything else away, leaving him naked and without a way back home. I heard that the scene with him trying to flag down a car on the highway was done without stunt drivers, just regular people driving down the road seeing a guy buck naked.

Not too long after that, a miracle. The doctorâ€¦the actual doctor, says that they have found a kidney for Ryuâ€™s sister. All that is needed is payment, the exact same amount of money that he had paid the organ traffickers. His sister knows none of this, but his girlfriend, Yeong-mi, is furious. And as dumb as Ryu may be, Yeong-mi is that much crazy. A left-wing radical with a penchant towards bringing up bizarre topics, her immediate solution to his dilemma is to kidnap the child of a rich family for money. Ryu is reluctant, but Yeong-mi reasons that there are good kidnappings and bad kidnappings, with the good kidnappings resulting in an exchange of the agreed amount of money for the captive and a bad kidnapping resulting inâ€¦wellâ€¦not that. They, of course, are going to pull off a good kidnapping. And who better than the 7-year-old daughter of his former boss?

They are in the process of following Ryuâ€™s former boss and his daughter whenâ€¦an incidentâ€¦makes Ryu change his mind. Since he was recently fired, he would be the first suspect in any kidnapping investigation. So, what is plan B? Kidnapping the 7-year-old daughter of the friend of his boss.

We donâ€™t actually see how they take the girl, named Yu-sun. It is implied that Ryu pretended to be a friend of her father and his sister isâ€¦assigned to be her babysitter? Ryuâ€™s sister is not really privy to what is going on, Ryu told her that Yu-sunâ€™s mother was in a car accident. I guess that she would never have approved of what Ryu and Yeong-mi were doing in her nameâ€¦whatever that name may be. Still, they bond with Yu-sun, who only mildly questions why she is in such a ratty apartment with people whom she has never met before. Whatever, sheâ€™s seven; whatâ€™s Ryuâ€™s excuse? Well, none of this really matters to Yu-sunâ€™s father, Dong-jin. His daughter is kidnapped. But he does what they ask, he avoids contacting the police and delivers the money (over twice and a half the amount needed for the operation) to the location. Everything goes well for Ryu and Yeong-mi untilâ€¦something happens. That something sets off a chain of events and bad decisions that set both Dong-jin and Ryu on quests for vengeance. So, that is where the vengeance comes in. As for the sympathy? Wellâ€¦

You know those movies where the protagonists are criminals, but likeable? And they end up going up against actually bad criminals? So you can side with bad guys while siding against bad guys? Thatâ€¦doesnâ€™t really happen here. I mean, sure, Ryu and Young-mi start out rather likeable and you can still side with Ryu and Young-mi throughout if you really want to, but donâ€™t forget that Ryu started all of this. And donâ€™t miss those little hints towards the end about a certain act that he commits. Yeah, he is not a bad boy. He is a bad man. As for Park. Eeshâ€¦

Some of the things that I like about the film are things that may very well have been what made it such a box office failure. The humor is often grim and sometimes just somewhat funny depiction of something sad. The world is not so much actively cruel as it is uncaring. Many of the characters would have been quirky in a comedy, but here they are either forgotten nobodies or vaguely dangerous. There is one subplot that seems to add nothing to the main plot except to show that other people in this world are suffering just as badly as our main characters.

To me, this movie had a false sense of sparseness. Every shot is filled with imagery and every scene is full of sound, yet it all seems completely empty. Even the factory scenes with full-on noise eventually becomes background droning without actually becoming quieter. It is less like watching the padding in Korean television dramas and more like being desensitized in real-time. It is a bit tricky to pull off, but this was probably achieved through the slowness of action, the relaxed editing, and the spare use of music. Except for the fake-out at the beginning, the movie usually relies on the sounds of the scene to be the soundtrack, resorting to some disturbingly chaotic avant-garde jazz when a character is experiencing overwhelming terror or some sort of mental breakdown. Some might find this way too unsettling while others may find it way too depressing and others still may found it just plain boring. If found it fascinating. Like a soft-spoken speech, it forced me to pay attention; it drew me in instead of throwing me back. That made the moreâ€¦bad scenesâ€¦that much harder to take. I was engaged not due to the characters, but due to the counter-intuitive vibe of the world.

There are some questionable storytelling choices in the movie. Not necessarily flawed or bad choices, just questionable. The kidnapping scene is not the only part of the narrative that is not shown. There is an investigation that we never really see and one particularly disturbing part of the story that one could figure out only from piecing together information from different scenes. Ryuâ€™s deafness becomes a liability during at least three scenes, one of which is pretty important; one would have figured that he would have taken steps to remain aware of his surroundings and the people there, but he hasnâ€™t and the reasons for him not doing so differ in each scene to the point of irony. Chalk it up to his being not so smart. There areâ€¦okayâ€¦there are two times when we see the little girl with her shirt off and one scene where Ryu acts in a playful manner towards her that could be construed as highly inappropriate. It is not up to me to argue here over whether these things are okay or not, but if those are the things that you object to the most in the movie, then that isâ€¦fine, I guess.

This movie is the first in Park Chan-wookâ€™s Vengeance Trilogy, which is a trilogy only in theme, not in actual narrative. The failure of this movie made Park go in a completely different direction for his follow-up, Oldboy. Gone was the slow, meditative, creeping emptiness; in came flash and dash and hyper-operatic grit. Letâ€™s just say that I didnâ€™t like it half as much as everyone else did. The third film in the trilogy is called Lady Vengeance or Sympathy for Lady Vengeance, and I thought that it struck a nice balance between the two styles. I will talk about that film at some point.

All three movies are set to have American remakes. I am rather neutral on the Oldboy adaptation and have a pretty negative take on what I have heard about Lady Vengeance, but so far, I am willing to give the Sympathy for Mr. Vengeance remake a chance if it does come to fruition. It could very well work. Some things may be lost, like the dark humor or the audio-visual style, it could still work out.