Jack Roush created his own performance engineering company after he left Ford in 1976. In 1995, his company, Roush Performance Products, started tuning Ford Mustangs. The latest Roush tuned Mustang is the 427R Mustang.

I saw a Roush 427 Mustang at the April 2011 edition of Houston Cars and Coffee. It did not stand out since it looks like most fifth-generation Mustangs. The exterior differences between a Roush Mustang and a normal Mustang are the hood, accents, front splitter, side splitters, and a three piece wing.

The Roush 427R Mustang is powered by a supercharged 4.6L V8 engine, paired with a five-speed manual transmission, that produces 435 hp and 400 lb-ft of torque. It goes from 0 to 60 mph in 4.7 seconds and reaches a top speed of 155 mph. Prices for the 427R Mustang start at $43,901. It is cheaper than the Boss 302 Laguna Seca Mustang and has the same performance of the Laguna Seca.

Top Gear did a feature on tuned Mustangs during Series 9, Episode 6. The Roush Mustang was two seconds faster around the Top Gear test track than the Shelby GT500. 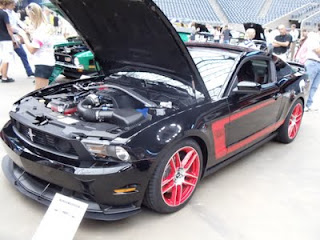 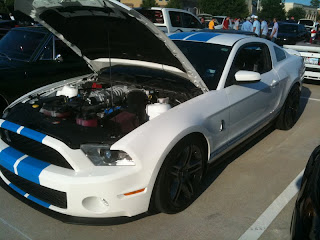