There have been many movies about Japanese organized crime. Outrage may not be the best place to start if one wants to get into the genre, but this is the movie that I am going with. 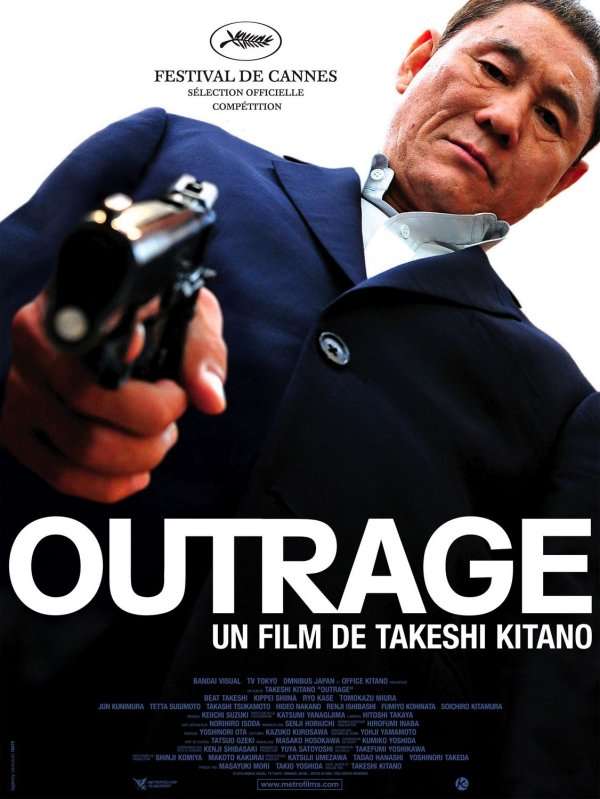 Not to be confused with all of those other movies called Outrage, this is about organized crime, or at least as organized as it can be when the organization starts to break down. To be honest, I often have trouble following the storylines of movies about organized crime. Either the plot is esoteric or the motivations behind the actions of certain characters baffle me. In other words, donâ€™t ask me to explain the plot details of the Godfather movies. At least with Outrage, some of the main characters also express confusion over what is going on. I appreciate that. It doesnâ€™t help me to understand what is going on or why, but it is a nice touch.

Okay, so this story concerns four crime families, with the main focus being on the Otomo family. Otomo is the protÃ©gÃ© of Ikemoto and the Ikemoto family is part of the Sanno-Kai family. Then, there is Murase, who is unaffiliated with Sanno-Kai, but became a sworn brother of Ikemoto back when they were in prison. While Murase would like to become part of the Sanno-Kai family, the Chairman of the Sanno-Kai family disapproves of the drug business that Murase and Ikemoto have been engaged in, dislikes Ikemoto dealing with Murase in the first place, and simply wants to take over Muraseâ€™s territory. Instead of outright declaring war on Murase, however, he demands that Ikemoto antagonize Murase and get him in trouble. Got that?

Ikemoto asks that Otomo and his men set up an office in Muraseâ€™s territory and throw their weight around. One of Otomoâ€™s men pretends to get suckered into one of Muraseâ€™s clubs and overcharged for drinks. Otomo and his men pretend to be outraged at the attempt of the Murase clan to go up against the Ikemoto family and demand an apology. Murase, not willing to go up against a sworn brother, sends a couple of his men to Otomoâ€™s office to give the traditional Yakuza apology in the form of the tip of one of pink fingers from one of the Murase thugs, but Otomoâ€™s men do not accept it. This leads to Muraseâ€™s second-in-command getting his face slashed.

As Murase tries in vain to maintain some sort of semblance of dignity, he starts losing control of his underlings, who try to attack Otomo and his men. The Chairman continues to order Ikemoto to display the power and ferocity of the Sanno-Kai. Ikemoto, for his part, repeatedly turns to Otomo to do the dirty work, claiming that the sworn brotherhood between him and Murase is just a formality at this point. Indeed, the alliances and loyalties within the three affiliated families start to fray as Otomo keeps getting orders from people who eventually deny giving them to him, and the Chairman starts giving conflicting orders and promises for reasons that are never fully explained. Is he trying to punish everyone in that section of the Family for dealing with drugs? Or is he simply on a power trip, trying to cause as much chaos as possibly without anything leading back to him? Add in a couple of crooked cops and the embassy for a fictional African country and you have Outrage.

It would be a bit misleading to call the film â€œdeepâ€. Indeed, of all of the Yakuza films headed by actor/writer/director Takeshi Kitano (and I will get to a few of them at some point), this is probably one of the most stripped-down movie. There is no emotional core, no sentimentality, no pining for the past; just gleeful cynicism and with the occasional outburst of brutal violence. There are no heroes, only bad guys; Otomo is perhaps slightly less bad than the others only because he actually accepts responsibility for his actions and orders, staying loyal until it is painfully obvious that loyalty means nothing anymore. Indeed, no one else seems to like taking responsibility for stuff when they do not have to. Ikemoto throws Otomo under the bus (not literally) when Murase comes to complain and the Chairman throws Ikemoto under the bus when Otomo gets confused over why he has to do something. The Chairman believes in a strict, top-down hierarchy, and sees the brotherhood between Ikemoto and Murase as an insult, even after there are hints that Ikemoto had been taking advantage of Murase for a while already. The Chairman wants everyone to be loyal to him alone, berating his second-in-command and undermining the authority of the bosses and underbosses of affiliated families. For their part, Yakuza members seem more than willing to insult their brothers, which can sometimes lead to fights and beatings. In a sense, it is a slightly bloodier version of corporate culture, where the boss is mad with power and the Human Resources Department is more into human disposal. It is also even more of a boysâ€™ club than normal. And you know how boys are.

If my description of constant nihilistic violence and betrayal does not make this movie sound like a barrel of fun, let me throw in how the movie makes Yakuza life look boring. Sure, the guys get to beat people up, torture people, and kill people. Sure, they sometimes gamble with other peopleâ€™s money, have sex with women, and drink for free. Sure, they get to intimidate people and act all tough. But, sometimes, they donâ€™t do anything. At the very beginning of the movie, there are tracking shots of men standing by their cars not doing anything. A couple people are talking, but the rest are just standing. They are not discussing pop culture icons of the previous decade or contemplating the fragility of existence; they are just standing around. There are several quick shots of Yakuza members just lounging around the office, waiting for anything to happen. Hardly the calm before the storm, it is nothingness. Their lives are nothing if they are not told to cause trouble. But when they cause trouble, trouble is what they cause.

Takeshi Kitano has made many movies about organized crime. This might very well be his least mature version. Other movies may have made quiet statements about the human condition; this one makes a sick joke about human garbage. If there is any moral to take away from this movie, it is to avoid the criminal underworld at all cost.

Somehow, Takeshi Kitano was able to make a sequel to this movie in 2012 called Outrage Beyond. I will not be talking about that movie in this series, but you will probably enjoy that movie if you enjoy this one. I have read that there will be a third movie and, especially given how the second movie ends, I am definitely looking forward to that one.

The Flintstones Closing Theme A Capella

The Powers That Be: “International” Powers

Jan 16, 2022 James Faraci The Last Of The Americans
Blogs