Given that my aside about race that ended up taking up over half of last weekâ€™s post, it probably is appropriate for me to start this post talking about prominent Japanese American human rights activist and friend of Malcolm X, Yuri Kochiyama.

And I just did. So now onto the movie. 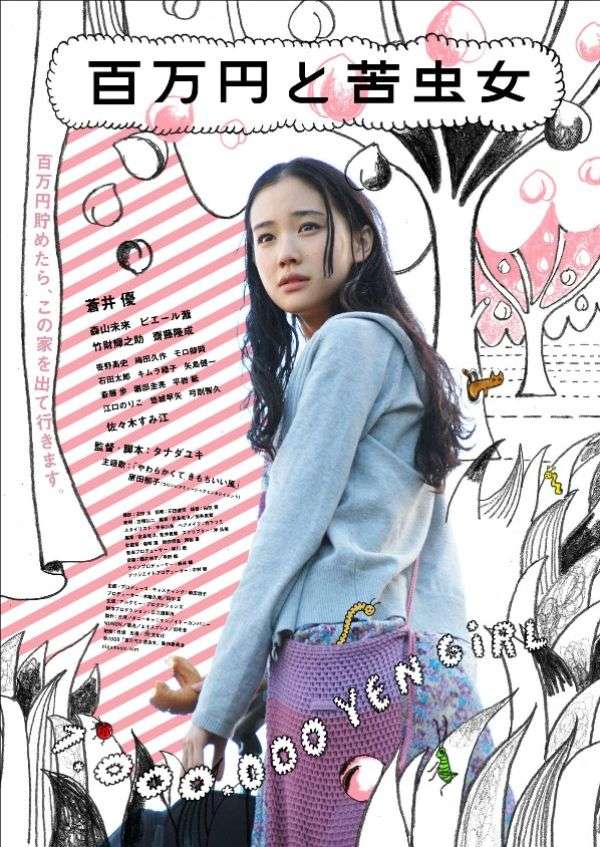 Suzuko is a 21-year-old waitress. And, apparently, a sour face. She lives with her parents and 12-year-old brother, but is paying rent out of obligation for her parents having paid for her college education. Why she does this is not clear at this point, but there are pretty strong hints later on. One of her co-workers suggests that they find an apartment together, so they go searching and eventually find one. What her co-worker failed to mention (or deliberately covered up, since I cannot believe that she could do this accidentally unless she is a complete moron) was that her boyfriend is going to move in to the apartment as well at an earlier time and pay one third of the rent. Suzuko is a bit put off by this, since she had met him only once, but does not protest. Then in another move that proves beyond a shadow of a doubt that the co-worker is not very reliable, she dumps her boyfriend and backs out of moving in without telling Suzuko, leaving it to the ex-boyfriend to tell Suzuko when she moves in. Okay, nevermind; her coworker really is a complete moron. So, now Suzuko is moving in with some mopey guy whom she doesnâ€™t know. Could this be the making of a new romance?

Suzuko has not quite finished moving in when she finds a little baby cat wandering outside the apartment. She brings it in and puts it in one of her moving boxes, with the intent of finding an owner for it the next day. However, while she is out getting cat food, her roommate throws it out. I am not sure how he figured that the cat did not actually belong to her, since he was not in the apartment when she found it, but his having been dumped apparently gives him license to be a complete jerk. Suzuko runs out to find the cat, only to see it dead on the street. Enraged, she throws out all of the roommateâ€™s belongings while he is away. Okay, that is also kind of a jerk move on her part. So everyone is jerk so far.

This little stunt of hers brings in the police, who arrest her at the restaurant. The roommate has claimed that, amongst all of the other possessions that he lost, there was a bag with $10,000 in it. Suzuko insists that she did nothing wrong, but cannot outright deny that she did not see the bag. She is forced to pay a fine and spend some time in jail.

When she gets out of prison and returns to her parentsâ€™ house, things are not quite the same. Her parents put on a brave face, but her brother is another matter. A gifted student, Takuya had been looking forward to Suzuko moving out, hoping that her absence would make it easier for him to study and get into a prestigious middle school. Her not only having returned, but also having a criminal record, will make things harder for him. Takuya lashes out at her at her homecoming dinner, which only leads to their parents yelling at each other. Suzuko decides that she has to leave again. She vows to work and save up $10,000, at which point she will move out, far away from everyone. And when she finds a place to live, she will work again to earn $10,000, at which point she will move far away from there as well. And repeat indefinitely.

And, so begins her journey around Japan. Suzuko tries to simply find a place to live and leave only a mild impression wherever she goes. The former is easy, but she finds the latter to be a little more difficult. She chronicles her travels in letters that she sends to Takuya, who is experiencing some troubles of his own. Three classmates of his bully him daily. While they may be doing it because of what Suzuko did, it is implied that they had been harassing him to some extent beforehand. Perhaps some of his wish to go to a prestigious school is so he will no longer have to deal with these kids. He had witnessed how Suzuko stood up to three former classmates of hers when they mocked her for having gone to jail, but he cannot muster the courage to either stand up to his tormenters or report them to anyone else. Although he had shown disdain for Suzuko early on, they had reconciled briefly before she left and he starts to find her to be an inspiration. But does she deserve that status?

It is not until two-thirds of the way into the movie that Suzuko explains (sort of) her motivation for leaving, but it is not that difficult to guess early on. Takuya is the brainy child and the one with the most potential; Suzuko had been known as nice and pretty, but awkward and otherwise unremarkable. Resigned to not being able to do her parents proud, she was determined to avoid being a burden. Like the Japanese saying goes, she endured what she had to endure. Or something. This led her to paying her parents for the luxury of living with them. It led to her trying to make things herself if she deems it cheaper than buying them from a store. After her imprisonment, the shame that she had already felt only worsened. It led to her running away from wherever she could before she became too attached to the place or the people. It led to her working as hard as she can to earn $10,000, the minimum amount that she deems necessary to start over again, and the amount that she had supposedly taken from her former roommate. She comes up with rules and rituals for herself that keep her responsible for her actions and her life, but she is frequently running away from both her past and herself. Her actions are like a cycle of starting over that can almost be seen as living reincarnation, leading towards emotional and social nothingness, if not actual Nirvana. While she has paid her debt to the law, she continues to punish herself with her regiment. Her independent streak is coupled with an extreme sense of shame and her need to be self-reliant is coupled with a self-imposed loneliness. When people try to pierce that loneliness, she has trouble knowing what to do. And what happens when the potential for true happiness comes her way? Does she accept it or push it away?

I suppose that I have made the movie sound much sadder than it is. The movie has a melancholy undertone, but it is actually fairly light and quite pleasant. Some of the more comical scenes involve people setting Suzuko up for something without consulting her, and her having trouble expressing her disapproval or even discomfort. That the scenes (along with most of the movie) are played very low-key and pretty straightforward makes the scenarios seem even more over-the-top than they would have otherwise. Indeed, people feel that they can use Suzuko as they wish and that she will just roll over for them. For the most part, she does, until pushed to the limit, and then she lashes out. Again, she enduresâ€¦wellâ€¦until she no longer can. Her eagerness to please and inability or reluctance to communicate can turn a mild misunderstanding into a minor incident. Or jail time.

This is a very enjoyable movie. Perhaps it is a bit inconsequential, not exactly funny enough to be a comedy and not quite dramatic enough to be a drama, but I highly recommend it regardless. There have been some gripes about the ending, and I do agree that it does seem a little off. However, I am not one to take the entire ending that seriously, and it does kind of fit with the tone and style of the rest of the movie and a commentary on how there are many possible futures to our lives, but ony one that we can ultimately take. To be honest, I was more confused about the beginning, starting with her getting freed from jail and then flashing back without warning or explanation. In any case, if you want a movie that might make you think a little without actually being too challenging to watch, then watch this one. Actually, just watch this one anyways.

Oh, and for full disclosure, I had never seen this actress before I had seen this movie. When I first saw it, I was surprised at how much she looked like this Vietnamese girl who came with her mother to live with my parents for a year a couple of years ago when she was thirteen. So, for all of you who say Asians look alikeâ€¦wellâ€¦anyways, she is going to be going to be living with them again for the school year next autumn. Maybe I will show her one of this womanâ€™s movies when I visit my parents during next school year and she will insist that they look nothing alike. What do I know anyways, I thought that her mother looked like Chinese actress Karen Mok, but have said nothing.