Jet Li has been one of the premiere Kung Fu Film Stars for decades. He played the legendary Wong Fei Hong in the Once Upon a Time in China series and he was a principle player in the Expendables moviesâ€¦well, at least the first one. He has kicked and punched his way into our hearts year after year in classic movie after classic movie. Fighting for justice, for honor, for nation, for redemption. In this edition of Watching and Talking about Films from Asia, I will recommend the film Ocean Heaven, where Jet Li must face what may be his toughest opponent yet: terminal cancer. 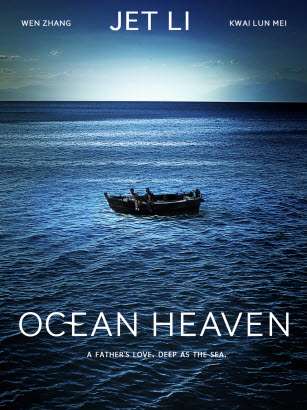 Bruce Lee had said that we must be water. Perhaps taking this bit of wisdom to heart, Mr. Wang and his son Dafu tie a weight to their legs and jump off a motorboat into the sea. Okay, maybe it was a murder-suicide attempt, but that is one way to beat cancer; beat it to the punch. In any case, it doesnâ€™t work and they end up returning to their apartment.

It turns out Dafu has autism. It is a kind of calm and quirky autism, where he mostly moves his head around and wiggles his fingers. He has problems doing basic things, like dressing, cooking, using the bus, managing money, keeping that stuffed animal off the television. He does not seem to have any special special person talent, except for maybe swimming, which might be why the drowning attempt failed. No card counting, not even playing the piano. Kind of ironic for an Asian, perhaps. But Dafu loves to swim. His social skills are not the best, but he finds comfort being with the animals at the aquarium where Mr. Wong works. He also strikes up a friendship with a juggler in a traveling acrobatic troupe, someone who feels a bit like a lost soul and sees something in him.

Dafuâ€™s autism would not necessarily be a big problem for Mr. Wang, except that Mr. Wang has terminal cancer. His wife died fifteen years ago and Dafu, now in his early twenties, is too old to stay at the orphanage or school for the differently abled and too young to live in housing for the elderly. In other words, cooking crystal meth is not going to help Mr. Wang. There are other people who might be able and willing to look after Dafu, but Mr. Wang cannot be certain if their generosity will last or if their ability to help will be adequate. Short of another murder suicide attempt, all Mr. Wang can do is try to instill some basic skills to for Dafu to incorporate into his daily life. These sessions are long, repetitive, and often frustrating. Sometimes, you can see Dafu struggling to do what his father says, but not being able to fully comprehend what he means.

About halfway through the film, Mr. Wang does find a place for Dafu can live and be looked after on a long-term basis, right after he almost completely gives up. Still, it is not an easy transition, and Mr. Wang still needs to teach Dafu basic skills, not necessarily to live independently, but to be able to do certain things without assistance. It is no easy task. It takes patience, persistence, and love. Will Dafu be able to take care of himself enough to be able to survive without his father? Will he be okay without his father?

A lot of Asian movies (and American movies, but anyways) depict people struggling to perform tasks that they donâ€™t necessarily want to do, simply because they have to or they feel obligated to. Usually, it is something complicated or something way beyond their skill set. In this case, it is learning to incorporate seemingly rudimentary actions into oneâ€™s daily habits. And it treats it with drama and humor that is similar to how other movies treat their tasks. There is always the sense of exasperation and ridiculousness, but it is almost always given respect, with little question as to whether it is worthy or necessary. It is always worthy and necessary. There is little talk of disappointment over a childâ€™s lack of potential. No tiger parenting. Just the love of a father for his child.

There are no villains, other than maybe the cancer and a system not set up to properly address Dafuâ€™s needs. There are maybe people who do not understand Dafu or are less than sympathetic towards his struggles, but no one mocking him day after day. In fact, there are many people who are sympathetic towards Dafu and his father, but maybe their level of patience, understanding, and ability are not necessarily up to the task. Part of Mr. Wangâ€™s pain comes from finding the right people, and maybe learning to trust them.

For the most part, the movie is low-key and matter of fact, avoiding melodrama or philosophical grandstanding. It is the mostâ€¦gentleâ€¦Jet Li film that I have ever seen. One could say that this movie is boring and full of nothing, but I like that it does not go over-the-top, even in some of its more dramatic scenes. I cannot comment on how well the movie portrays autism, cancer, or Chinese social services. Primarily, though, I think that this movie is all about love. The hope and kindness that his love inspires within others. The lengths that he will go for his child. His desire to ensure that that child will still be loved after he is gone. It is about the constant struggle and the small victories. It is not about the Kung Fu fighting heroes, but the ordinary heroes. And it is wonderful. And devoid of Kung Fu. There is a bit of juggling, though.

I heard that Jet Li was paid one dollar to be in this movie. I donâ€™t know if that is the legal minimum that an actor needs to be paid, but even if it is not, that shows how much he wanted to be in this film and to have it get made. Then again, he could have just been coasting with his Expendables money. But, anyways, Ocean Heaven is a good movie.