Happy Halloween, everyone! I’m sure you’ll be watching some classic horror movies such asÂ The Thing, Dracula, Frankenstein, Friday the 13th, Nightmare on Elm Street,Â orÂ Halloween.Â Or you’ll be watching funny horror movies likeÂ Evil Dead, Shawn of the Dead, Fright Night,Â orÂ Zombieland.Â But when you were a kid, you wouldn’t be watching these now classic Halloween movies just yet. Instead Nickelodeon would be having their Halloween specials and we would be tuning in to watch them. But which ones are the best? Which are the specials we tune in to watch every year to give us the chills? Well, let’s find out.

Before I get to the list, here are the honorable mentions:

The Adventures of Jimmy NeutronÂ has a really cool Halloween special. Jimmy has a device that can give them classic Halloween costumes, but it turned out that the machine actually made them monsters. Carl is a vampire, Sheen is a werewolf, and Hugh is a Frankenstein monster. Jimmy tries his best to make sure that chaos doesn’t occur in Retroville.

It Came From Underneath the Bed

This is one of the first Halloween episodes I ever saw on Nickelodeon and Kevin and I absolutely love this special. In fact, it’s our favorite episode ofÂ Eureeka’s CastleÂ ever! Batly tells the story of a scary monster in front of all his friends and they all get scared, especially Magellan. Bog and Quagmire decide to dress up as the monster while the actual monster is sneaking around Eureeka’s castle. When we told this story to Cheryl Blaylock, the woman who played Eureeka, that we loved this episode, she was filled with smiles! It’s one of her favorites too.

The first Halloween special ever to be aired on Nickelodeon was this one.Â Mystery Magical SpecialÂ Â starred Marc Summers and three kids wandering around a haunted house filled. The house was filled with creepy things like heads falling from ceilings, jump scares, and a demon-like monster. In every room would be a magician performing tricks like then newcomer magician Lance Burton, Tina Lenert, and Marc Summers himself. As you recall from my interview with him, he is still very proud of starring and producing this Halloween special and it still remains a classic for old school Nickelodeon fans to this day. It’s a bit low on this list because it isn’t that scary and the kids’ acting is a bit hokey. Nonetheless, this is a true Halloween classic for every Nickelodeon fan and one of the rare times in which we see Marc Summers doing what he used to do before he became a game show host onÂ Double Dare:Â magic tricks.

ThisÂ RugratsÂ Halloween special was one of the first Halloween specials that most kids saw in Nickelodeon. It’s Halloween night and Tommy, Chuckie, Phil, and Lil are seeing everyone dressing up in costumes, carving Jack o Lanterns, and setting up a haunted house outside the backyard. Angelica tells them about Halloween and shows them a Reptar bar. The kids want it and try their best to get one. They sneak into the haunted house, scream, and get themselves the candy in the end. It’s pretty cute looking at it over 20 years later and it does have really creepy animation and music.

2 years afterÂ DougÂ debuted on Nickelodeon, it aired its only Halloween special for Nickelodeon. Doug and Skeeter enter into Funky Town in honor of Halloween dressing up in their costumes. Rumors of a creepy ghost that would haunt around midnight in Funky Town’s haunted house spread around the town. Doug and Skeeter sneak into Funky Town to look around. They meet up with a creepy guy dressed up as the rumored ghost and he helps them scare Roger and the gang after they scared Doug and Skeeter around the theme park. At the end, they do. At the end, they find that their new friend isn’t who he says he is. This is one of Kevin’s favorite Halloween specials on Nickelodeon, but not really mine. Nonetheless, I’ll put in on the list for him.

This episode ofÂ Ren and StimpyÂ starts off pretty simple and funny. Ren and Stimpy enter in a haunted house where a ghost tries to scare them. However, every time he tries to scare them, he fails at it miserably. There are references such asÂ PsychoÂ andÂ Texas Chainsaw MassacreÂ that make this show creepy and funny. However, the ending is so strange. It’s so weird that after looking at the episode, I said out loud “What the #*$#%? did I just see?” But then again, this isÂ Ren and Stimpy.Â I shouldn’t be surprised.

Yes, yes, I know thatÂ Sugar Frosted FrightsÂ is the trueÂ Rocko’s Modern LifeÂ Halloween special, but I prefer this one more. Rocko suspects that Mrs. Bighead killed Ed when he disappeared. Rocko watches Mrs. Bighead closely and she does things very strange and mysterious. It’s very creepy and spooky as Rocko puts everything together to find out where Mr. Bighead is. The intro to this episode is an homage toÂ Hitchcock HourÂ and it pulls everything together of making this spoof work.

5. The Day the World Got Really Screwed Up

For some reason,Â The Angry BeaversÂ Halloween special gets overlooked sometimes and that’s a shame. It’s the day before Halloween and Norbert and Daggett are dressed up like Oxnard Montalvo, Norbert’s favorite B horror movie actor, and a finger. They trick or treat all over the neighborhood with no luck until they go to the final house which happens to be Oxnard Montalvo’s house. When they enter the house, the butler welcomes them with laser eyes and turns out to be a monster. Norbert and Daggett finally find Oxnard, the doctor, and the leading lady trying to fight off the monster. This episode plays off like a B movie with awful acting, cheap effects, crazy looking stairs, and a “scary” monster. It’s awesome!

Hey Arnold’sÂ Halloween special is a great homage to Orson Welles’ radio show talking about the story ofÂ War of the Worlds.Â It’s Halloween and Arnold and Gerald want to do something a tad bit different. They hack into the radio station and talk about aliens landing on Earth and taking over the world. They convince their friends to dress up as aliens to fool all the adults. However, they believe that aliens did land on Earth and plan an attack against them. Big Bob leads the group and everyone in the town gets involved, even a television show that discusses about aliens hosted by a man who sounds like Orson Welles. This small little prank turns into a huge calamity throughout the entire town.

3. The Tale of the Twisted Claw

Of course I’m going to include an episode ofÂ Are You Afraid of the Dark?Â on this list. It would be a crime if I didn’t. Even though thatÂ The Tale of the Dangerous SoupÂ is my all time favorite episode,Â The Tale of the Twisted ClawÂ takes place in Halloween. It stars two kids named Kevin and Dougie who play a prank on an old woman by spraying her face with shaving cream and causing her to break her vase. They go back to Trick or Treat as if it never happened and the woman gives them a gift: a twisted claw that has the ability to grant three wishes. Every time they use it, it comes true but something bad happens. It teaches the lesson to be careful what you wish for, it might come true. In this case, it does.

But wait a minute, if an episode ofÂ Are You Afraid of the Dark?Â isn’t #1, then what is? Let’s continue.

Invader ZimÂ was always a very creepy, dark, and strange show. So what would happen if we had a Halloween special? Well, it gets creepier, darker, and stranger. It’s Halloween and Zim is fearful of the hungry candy eating “zombies” that haunt his house. He locks up his house tight hoping that no one gets in. Meanwhile Dib is getting visions from another dimension filled with scary spooky places and monsters and many people think he’s gone crazy. So crazy in fact that he’s locked up in an asylum forever. He wakes up in the other dimension again and he learned that fooling around with his father’s dimension device combined with his mind was the cause of these visions. The only way to stop them is if Zim can help reverse the effects. But it ended up with Zim and Dib teleported to the dimension again and no way to get out. The only way to do it is if they work together to find a way out of the dimension. Very strange and creepy indeed, especially a very fat GIR constantly eating candy.

Even if you’re not a fan ofÂ The Adventures of Pete & Pete,Â this Halloween special is truly something special. Little Pete wants to break the record of going to the most houses collecting Halloween candy and needs to find a new partner. Mona can’t since her father won’t let her and Big Pete refuses to do it because of a secret involving with a group known as the Pumpkin Eaters. But Big Pete decides to do it and he and Little Pete dress up as Buzz Aldrin and Neal Armstrong. As they go Trick or Treating, they get closer and closer to beating the record and Big Pete is on the lookout for the Pumpkin Eaters. This episode is a great episode that shows Halloween in a very realistic way that everyone can relate to, but has that strange charm thatÂ The Adventures of Pete & PeteÂ are known for. A true Nickelodeon Halloween classic and my absolute favorite Halloween special in Nickelodeon!

Those are my top 10 favorite Halloween specials from Nickelodeon. What are your favorite specials? Post it in the comments below. That’s all for now. Hope to see you around Old School Lane soon. Happy Halloween, everyone! 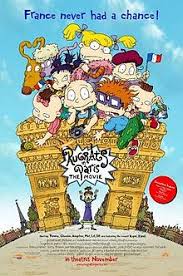