Despite shows likeÂ The Angry BeaversÂ andÂ The Wild Thornberrys,Â Nickelodeon hasn’t had a huge critical hit in a while. The newer shows weren’t up to parÂ with the older shows from the early 90’s. The competition of the #1 kids’ network was getting tougher and tougher with Cartoon Network, FOX Kids, and Kids WB dishing out top notch cartoons. With that said, Nickelodeon knew they needed a huge hit! On May 1, 1999, one Nicktoon came and became not only a huge hit, but a worldwide phenomenon. That show is none other thanÂ SpongeBob SquarePants. 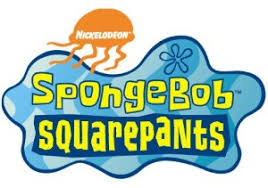 The show takes place under the sea in a underwater town named Bikini Bottom. In it, a young naive yellow sponge named SpongeBob SquarePants lives in a pineapple and works in a fast food joint called The Krusty Krab as a fry cook. He interacts with his friends such as Patrick Star, a very dimwitted star, Sandy Cheeks, a squirrel from Texas who lives in a aquatic dome, Mr. Krabs,Â his boss at The Krusty Krab who’s a real cheapskate and loves money, Pearl, Mr. Krabs’ daughter, and Squidward, his neighbor and co-worker who hates SpongeBob and Patrick with a passion.

In each episode, you would see SpongeBob go through many things such as going jellyfishing with Patrick, pestering Squidward, working at The Krusty Krab, playing karate with Sandy, SpongeBob trying to get his driver’s license, or SpongeBob being clueless of Plankton’s plan of trying to steal the Krusty Krab secret formula to make Krabby patties.

The show was created by Steven Hillenberg. Before he would become a well known animator, he was a marine biologist teacher at the Orange County Ocean Institute around the early 80’s. He decided to quit and pursue his second passion: animation. While going to school at the California Institute of the Arts, he created a comic book calledÂ The Intertidal ZoneÂ in which it takes place underwater with anthropomorphic sea life led by a sea sponge named Bob, which would be a precursor to SpongeBob.

Then around 1993, Hillenburg was hired by Joe Murray, the creator ofÂ Rocko’s Modern Life,Â to become a director of the series. In that show, he met the people that would eventually be the main force behindÂ SpongeBob SquarePants.Â Many of the writers, voice actors, and producers ofÂ Rocko’s Modern LifeÂ such as Dan Povenmire, Martin Olsen, Paul Tibbit, Mr. Lawrence, and Tom Kenny. In theÂ Rocko’s Modern LifeÂ episode “Fish and Chumps”, Hillenberg had met Kenny and saw his amazing talent doing his voice on Heffer and the sea captain.

“When I went in to cast the show, I got all these horrible impersonators of what I wanted. I knew I wanted Tom from the beginning, from working with him. [Beyond him] I had in mind kind of crude imitations of what I wanted”, said Hillenberg in a 2009 interview with Comic Riffs.

Also, since the episode mostly focused on anthropomorphic sea creatures, he had decided to go back to his original concept of the comic book he worked on when he was in Cal Arts. WhenÂ Rocko’s Modern LifeÂ ended in 1996, Hillenburg hired the majority of the crew fromÂ Rocko’s Modern LifeÂ and had worked on a new cartoon for Nickelodeon.

“I created a bible and a few paintings to explain the characters and their world. To supplement this I sculpted SpongeBob, Patrick and Squidward and put them in an aquarium where they were propelled by an air pump. I also recorded a temp theme song on a small tape recorder and mounted it inside a conch shell with a mercury switch, the song would play whenever the shell was lifted to the ear. I was also nude.”

He pitchedÂ the pilot episode “Help Wanted”Â to the Nickelodeon execs and they had loved it. However, there were a few changes from the original pilot than the one that would eventually be shown on May 1999. First, SpongeBob’s original name was SpongeBoy, but SpongeBoy was the name of a mop product. So Hillenberg changed his name to SpongeBobÂ and the rest was history. 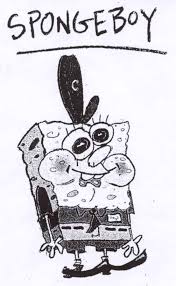 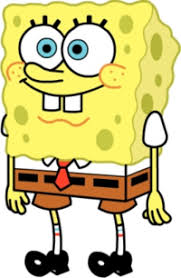 The inspiration of SpongeBob was a mixture between the innocence, naive, optimism, and goofy humor of Jerry Lewis, Stan Laurel, and Pee-wee Herman. Also another thing that SpongeBob was known for was his questionable sexual identity. In the episode “Rock-a-bye Bivalve”, SpongeBob and Patrick portray themselves as a couple raising a baby sea scallop. SpongeBob would dress up in dresses and be portrayed as the mom. There were many instances in the show that would address that SpongeBob was possibly gay. But according to Hillenberg, that was not the case.

“Everybody is different, and the show embraces that. The character SpongeBob is an oddball. He’s kind of weird, but he’s kind of special. I always think of them as being somewhat asexual. Kids aren’t stupid, and I think that there are some things written in [other TV] shows that [are] insulting to their intelligenceâ€¦we set a precedent to write something intelligent. I mean, after all – [kids] ARE sponges! â€¦a lot of the stories come out of the personal experiences I and the other writers had as kids.”

Going back to one of SpongeBob’s influenced inspirations, the character of Pee-wee Herman was also pronouced and portrayed as asexual, especially in the case ofÂ Pee-wee’s Playhouse.Â There are two episodes that increase this hypothesis: “The Cowboy and the Countess” and “Sleepover”. In “The Cowboy and the Countess”, Cowboy Curtis wants to ask Miss Yvonne on a date, but is too nervous. So Pee-wee has a pretend date with Cowboy Curtis so that Curtis would have the confidence and know-how of dating. In one scene in particular, Curtis almost kisses Pee-wee until Pee-wee said that he had enough. Also, let’s not forget about the “Sleepover” episode in which Pee-wee loved a fruit salad so much that he married it. At the time, there were many questions to Pee-wee’s sexual character. But as you recall from the 1987 interview with Rolling Stone magazine,Â Pee-wee’s Playhouse’sÂ main essential reason of its huge popularity was that it taught kids that it was okay to be different. 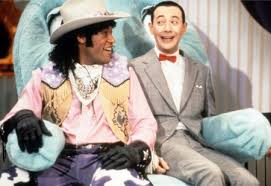 Same here with SpongeBob, which is why even to this day, he has a huge following with many different types of people. The reason why was because SpongeBob had a quirky personality that had touched the hearts of many.Â Do we call Bugs Bunny a transvestite because he used to dress up in women’s clothing to get himself out of trouble from Elmer Fudd and Yosemite Sam? No, we don’t. Regardless on what you perceive as SpongeBob’s sexuality, you have to admit that he is truly an unforgettable character who is extremely versatile in whatever situation he’s put on.

Another thing that the show is known for is its music. While not as musical as sayÂ AnimaniacsÂ orÂ Histeria, SpongeBob SquarePantsÂ has had catchy and memorable songs such as “F.U.N”, “Ripped Pants”, Sandy’s song about wanting to go back to Texas, “The Best Day Ever”, “Patrick’s song” and the main theme song. I even have a Singing Machine Karaoke CD of Nickelodeon songs mostly containing songs fromÂ SpongeBob SquarePants.Â It’s almost daunting.

When the show first came out, it wasn’t an instant hit until the second season started around 2000. Then the show because a worldwide phenomenon! Ads and merchandise such as toys, CDs, games, food, clothes, bookbags, anything you can think of had SpongeBob’s face all over it. It was pretty much everywhere and still to this day, it’s one of the most popular programs on Nickelodeon. Today, it’s ranked #1 in the most episodes airing, the best Nicktoon ever to grace the network, and one of the most memorable cartoon characters of all time. However, there is a mixed opinion aboutÂ SpongeBob SquarePants.Â While in June 2010, he was rated #10 inÂ The Top 100 Characters Over the Last 20 YearsÂ according toÂ Entertainment Weekly,Â he was also ranked #4 in AskMen’s Top 10 Most Irratating Cartoon Characters. Just like Pee-wee Herman, you either love SpongeBob or you hate him. There’s no in between. My overall opinion is that I love him and the show! Maybe not much as a lot of people, but still I cannot ignore what a huge icon he became. 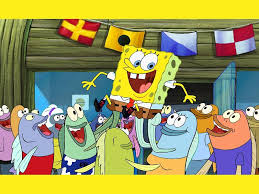 His presence is so hilarious and endearing! The situations he gets into are hilarious, the jokes are spot on, the timing is great, the characters are memorable, the music is catchy, the concept is unique, and the overall presentation is absolutely something to behold. There have been many imitators and shows inspired byÂ SpongeBob SquarePantsÂ such asÂ Coconut Fred, Chowder,Â andÂ Adventure Time,Â but nothing is as captivating asÂ SpongeBobÂ is.

The show went to a brief hiatus in 2004 when the third season had ended. What we didn’t know at the time was that SpongeBob and his friends would eventually hit the big screen withÂ SpongeBob SquarePants: The Movie.Â But we’ll discuss about it another time. 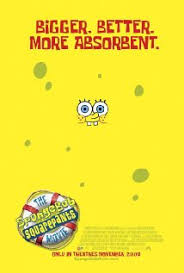 After the movie was released, HillenburgÂ became an executive producer of the show and gave his position of forerunner to Paul Tibbit. A lot of people have said that the show wasn’t the same since then, which I completely agree with. Similar toÂ Rugrats,Â my favorite seasons ofÂ SpongeBob SquarePantsÂ are the first three seasons. However, unlikeÂ Rugrats,Â there are a few episodes ofÂ SpongeBobÂ that I still laugh and enjoy watching afterwards. It seems incredible that a simple show about a sponge can get the attention of so many people, both kids and adults. Even Hillenburg himself is amazed by SpongeBob’s ability to captivate the minds of many people from all over the world.

“I never imagined working on the show to this date and this long. It never was possible to conceive that. . . . I really figured we might get a season and a cult following, and that might be it. I think we all thought the show would be good, but I didn’t ever assume it would catch on in a mass audience sort of way â€¦ Just seeing all the products out there and complete strangers wearing a drawing of a character that you created â€¦ it’s both wonderful and strange.”

Many people have claimed thatÂ SpongeBob SquarePantsÂ was the last great Nicktoon to air and the ending of Nickelodeon’s golden era. Shows afterwards didn’t have the same charm, creativity, and humor that the previous Nickelodeon shows had withÂ Ren and Stimpy, Doug, Rugrats, Aaahh!!! Real Monsters, Rocko’s Modern Life,Â andÂ The Angry Beavers.Â Is this true? Well, as we continue on in this tribute, we’ll see if people’s perceptions are correct. If you aren’t a big fan ofÂ SpongeBob SquarePantsÂ and his crazy antics, that’s fine. If you have never heard ofÂ SpongeBobÂ before, then you must have been living under a rock for the past 13 years. I highly recommend checking this show out!

That’s all for now. Tune in next time as we take a look at Klasky-Csupo’s 4th NicktoonÂ Rocket Power.