The show was about a group of three alien warriors named B-Bop a Luna (voiced by Charlie Schlatter), 2T Fru T (voiced by Rob Paulsen), and Do-Wah Diddy (voiced by Jess Harnell) who were sent to planet Earth by their leader Emperor Bog (voiced by S.Scott Bullock) to conquer it. When they land on Earth, they make friends with three kids named Mike, Cedric, and Angela and start to love the planet, especially the humans, hoverboards, and hamburgers. They decided not to conquer Earth. However, Emperor Bog doesn’t know of the aliens’ decision and he always checks on them to see if they’re doing their job. His right hand man Dr. Damage, however, does and tries to convince Emperor Bog about it. In every episode, the three aliens fight against evil villains who either try to conquer Earth or has a hatred with the Martians. When they combine their abilities and shout “BKM” (Butt Kicking Mode), they get their gear and fight against them. The episode concludes with lying to Emperor Bog about learning techniques about conquering Earth and him not knowing any better. Really, there’s not much to say. That’s basically it. 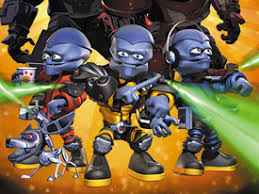 The purpose ofÂ Butt Ugly MartiansÂ was toÂ contrast the darker, moodier, and more adult-theme animated sci-fi seriesÂ Invader Zim.Â However, it was a huge failure. The show was quickly cancelled less than a year after its debut on February 21, 2002. Looking back years later, I must say that this is, without a doubt, one of the WORST Nicktoons I’ve ever seen. The animation is clunky, blocky, and dated, the characters are bland and forgettable, the episodes are beyond BORING, and the action is underwhelming. There is nothing inÂ Butt Ugly MartiansÂ that satisfies anyone. I don’t recommend checking it out!

That’s all for now. Tune in next time as we go into the year 2002 and discuss aboutÂ All That’sÂ third spin-offÂ The Nick Cannon Show.