Around the 2000’s, Nick Jr. decided to follow the same path of what Nickeloeon was doing a few years previously: movies. Around Christmas 2000, Nick Jr. had their first theatrical movie debut withÂ The Little Bear Movie.Â

Based on the Nick Jr. TV series and the books written by Else Holmelund Minerak,Â Little BearÂ is about the simple stories of a young bear cub named Little Bear and his numerous adventures alongside his parents and best friends. For how I feel about the TV series, I like it okay. It’s simple, has nice animation, nice, calm orchestrated music, and sticks very close to the theme of the books. So how does the movie stand out? Let’s check it out. Here’sÂ The Little Bear Movie.Â The movie starts off with a bear cub waking up finding himself all alone calling his mom and dad. While looking around the deep woods, he then learns that he’s all alone. Meanwhile we see Little Bear getting ready to go on a camping trip with Father Bear. Little Bear is very excited to go out with Father Bear and he quickly finishes his packing.When fishing near a lake, Little Bear sees the bear cub from the beginning of the movie catching fish with his paw. He’s having difficulty as he fell down and scared the fishes away. Little Bear finds it funny and joins alongside him not knowing that he was fishing like a bear. 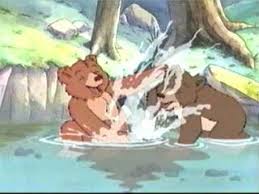 The bear cub doesn’t find it funny and walks away. Little Bear wanted to know more about him so he introduces himself. The bear cub simply introduces himself as Cub. He goes off where we also see his friend Little Moose. Little Bear follows them not knowing about the danger that lurked behind him with a mountain lion. Cub saves his life with Little Bear not having a clue to what was going on. Cub then realizes that Little Bear is not from the woods. Little Bear finds himself lost not knowing where Father Bear is. Cub helps Little Bear settle in the woods and make himself feel calm. Little Bear questions him on where his parents were. Cub tells him that he doesn’t know where they are. He had been lost for a long time and has looked everywhere for them. Little Bear tells him that he’ll take Cub home to his house the following day. When Little Bear and Cub walk over to the house, Father Bear find them heading towards the path and was worried sick about where his son was. Little Bear explained about Cub’s problem and Father Bear decides to take Cub home to take care of him until they find his parents. 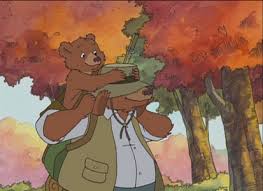 Cub isn’t able to understand the indoor life of Little Bear with them cooking their food and sleeping in beds. Little Bear realizes that Cub doesn’t feel at home so he decides to help find his parents. The next day, Little Bear’s friends Duck, Cat, Hen, and Owl come over to play with Little Bear and are confused to seeing Cub. Little Bear explains that Cub is lost and needs to find his parents and they offer to help. As they search around the woods, the gang gets separated from one another. Little Bear, Cub, and Duck try to look around the deep woods for both Cub’s parents and the separated group consisting of Owl, Hen, and Cat. They come across Little Moose and Cub’s other friends Poppy and Pete, two foxes. They had seen where Cub’s parents were so they follow them. Meanwhile Trouble, the mountain lion, sneaks in to try to eat Duck, but Little Bear comes and saves her life. Poppy and Pete then lead Cub’s parents over to Cub and the movie ends with them reuniting. 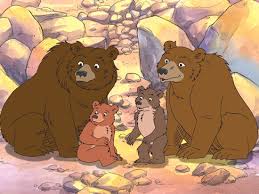 Overall, the movie was okay. It was very nice, colorful, and had a calm, relaxing atmosphere. However, I find the pace to be a tad bit slow and the main villain to be underwhelming. But then again, it’s a movie based on a pre-school show. It doesn’t do anything preachy or awful. Kids nowadays would find it to be very boring and would want to tune into a more faster paced show, but I liked theÂ Little BearÂ series okay. It’s a nice relaxing refresher to stray away from the fast paced shows you would see likeÂ Yo Gabba Gabba!Â

That’s all for now. Tune in next time as we have a special interview with one of the voice actors fromÂ Little Bear.Â Hope to see you around Old School Lane soon. Thanks for reading.