Hey everyone, welcome back to our tribute of the eccentric Tim Burton. Today’s next movie is the 1988 comedy horror classicÂ Beetlejuice.

After the huge financial success ofÂ Pee-wee’s Big Adventure, Burton had gained the reputation of being a “bankable” director. While he was working on a new script of a newÂ BatmanÂ movie with Sam Hamm, he was giving more scripts for him to direct on. Still uninspired and uninterested due to their lack of originality and imagination, he refused on a good majority of them. One of the scripts he was given to direct was the 1988 comedyÂ Hot to Trot.

Thank God Burton refused to direct this movie because if he did, his career would have slightly tarnished with that awful comedy and we may not have gottenÂ Batman. More on that movie some other time.

One day, David Geffen had given Burton a script ofÂ BeetlejuiceÂ written by Michael McDowell. Burton loved the script and agreed to direct the film. With me today is a huge Tim Burton fan and the co-founder of this very blog, my buddy Kevin G. How are you today, Kev?

Patricia- Alright then. When did you first watchÂ Beetlejuice?

Kevin- I first saw it on VHS that my mom rented on a video store. I saw it and I fell completely in love with it. Ever since then, I would say that it is one of my favorite movies of all time: my top 5.

Patricia- I first saw it on TV when I was 6-years-old. It was the strangest movie I had ever seen. I had never seen anything like it. The monsters, the ghosts, the decorations, the effects, it was so creepy, yet so funny at the same time. So let’s see if this movie still has the creepy and hilarious chops as we discussÂ Beetlejuice. 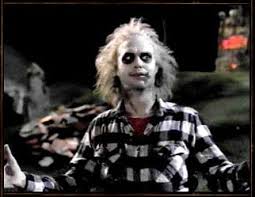 I know that you’re not a big fan of discussing a movie word for word, Kev, so I’ll give a quick synopsis on what the movie is about. Then we can talk about our favorite things about it.

Kevin- Sounds good to me.Â That way if people are interested in it, they can see it for themselves and we can talk about what we love about it.

Patricia- Sounds good. The story is about a couple named Adam and Barbara Maitland (played by Alec Baldwin and Geena Davis). After moving in to a nice town in Massachusetts, they settle into a nice home and go out for a nice drive. However, they get themselves into a car accident and are now dead. They don’t realize that they’re dead until a few years later when many things have changed. An eccentric family moves in to their house and decorate it in a strange way that Adam and Barbara don’t find appealing. They decide to scare the family away, but it turns out more difficult. They ask for the assistance of a ghoul named Beetlejuice. They would call his name three times and there he would appear in front of them. He was a psychotic nut job who can scare anyone like there was no tomorrow, but at the same time very threatening, pervertic, and funny. Throughout the entire movie, we are introduced to the characters, the different worlds, and the relationship between the couple and the family’s daughter Lydia. 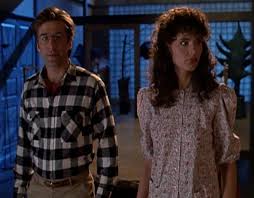 Kevin- Agreed. Beetlejuice was always fun to watch. He would always steal the scene everytime he made an appearance. Michael Keaton did a great job portraying this insane character. I especially love the scene in which he met Barbera and Adam for the first time. 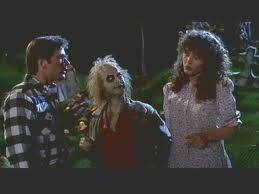 Patricia- What did you think of the soundtrack, the designs, and the stop motion effects?

Kevin- I absouletely love the soundtrack toÂ Beetlejuice.Â I even have it on my iPod alongside with the soundtrack toÂ Pee-wee’s Big Adventure.Â I love Danny Elfman’s music: it perfectly complements everything that the movie shows. The designs are true Burton-esqueÂ giving a really creepy atmosphere. From the underworld to our world, he seems to bring about his style into every scene. The stop motion effects were truly ahead of their time: the scenes with the sandworms and Beetlejuice turing into a snake scared the shit out of me when I was a kid. Looking at it now, it still looks absouletely amazing and creepy. There’s a reason why Tim Burton is one of my favorite filmmakers.

Kevin- As for the casting, it was absolutely great. Interesting fact about Winona Rider. She didn’t need to audition for the role of Lydia. When she was waiting to be called in to audition, she sat down to a strange looking man whom she assumed to be one of the producers. They sat down and talk about metal bands for the past 20 minutes. Little did she know that the man she was talkingÂ to was Tim Burton himself. He found something special about her and gave her the role of Lydia. 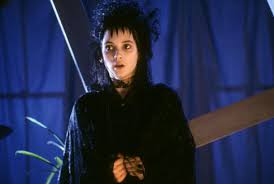 Patricia- I did not know that. Thank you for sharing, Kev.

Patricia- There was also an animated series ofÂ BeetlejuiceÂ that Burton had produced afterÂ BeetlejuiceÂ was released. Despite it being completely different, I find the series to be really cool.

Kevin- I do too. As a kid, I had loved everything about it. I loved the opening song, the designs, the new characters, and the humor. While Beetlejuice and Lydia are portrayed as best friends in the cartoon, they had really good chemistry together. 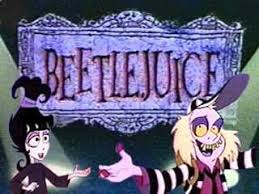 Patricia- So Kev, do you recommendÂ Beetlejuice?

Kevin- Without a doubt!Â BeetlejuiceÂ is a combination of funny humor, scary scenes, beautiful designs, incredible music, memorable characters, and fantastic stop motion animation. When it came out, it was ahead of its time. Nowadays, it’s an undeniable classic! If you haven’t seen this movie, stop reading this review and watch it NOW!!!!!

Patricia- There was supposed to be a sequel toÂ BeetlejuiceÂ calledÂ Beetlejuice Goes Hawaiian.Â However, it has been in developmental hell for over 20 years. Now there’s rumors that it will finally be greenlit. What do you think of it?

Kevin- Well, I heard that Michael Keaton will return as Beetlejuice, which is awesome! But Seth Graham Smith, the guy who wrote those booksÂ Pride and Prejudice and ZombiesÂ andÂ Abraham Lincoln: Vampire HunterÂ is doing the script. I have mixed feelings now that I know he’s doing this script sinceÂ Dark ShadowsÂ and the movie adaptation ofÂ Vampire HunterÂ didn’t do so well on the box office. But I’m hoping it will be awesome! We’ll just see.

Patricia- That should do it. Kevin, thank you so much for joining me in this review.

That’s all for now. Tune in next time as we continue the tribute with a look atÂ Beetlejuice: The Animated Series. 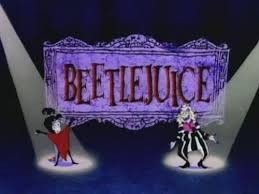