Letters to Celestia: EqG:RR “Let’s Have A Battle”

FINALLY! We get an actual clip from the Rainbow Rocks movie. At least we can get some knowledge about the film as well as getting to hear another song.
It starts off in the Cafeteria with a reformed Sunset Shimmer meeting up with most of the ManeÂ 6. She speaks of when getting a tour of the school to a group of students; she notices something â€œOffâ€ about them. Seconds Later, we get our first look at these Students, the Dazzlings lead by Adagio Dazzle. 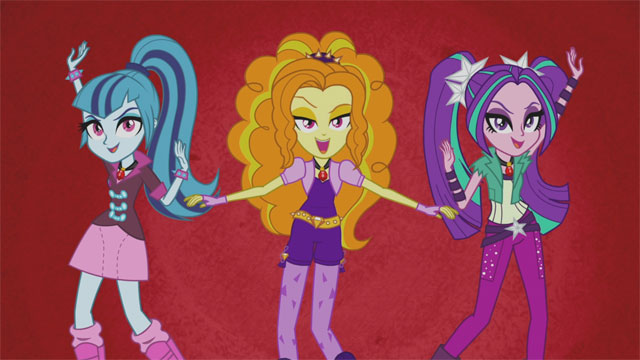 The Dazzlings sing a song about having a Battle of the Bands stating â€œWhatâ€™s Wrong with a Little Competition?â€ which actually splits the whole school up into their own little groups plus intriguing Sunset Shimmer as well (Sheâ€™s probably going to end up being a Villain again in this one) While the Girls watch there song but arenâ€™t affected by their song. (Vinyl probably wasnâ€™t as well considering she has her Headphones on the whole time and they play her up to having a large role in this film where sheâ€™ll most likely team up with the Mane 6. )
The Dazzlings were acting Seductive throughout the whole video. They mostly just mesmerized the whole student boy over with a little help from their Necklaces that the three of them have.Â  It reminds me of Dr. Facilierâ€™s Necklace and Jafarâ€™s Staff.
(My Guess is that the Necklaces might be a weakness.)

Not much is known Adagio Dazzle and the other two aside from them being the villains and that they use their necklaces to win people over.Â  (Also according to the toys, Adagio was a Pegasus.) Her design is a bit similar to Carrot Top/Golden Harvest with a Jem-esque outfit.Â  Aside from Adagio, the other two looked like they are characters from Monster High.

The Song in the clip â€œLetâ€™s Have A Battleâ€ was very simple and it mainly was just Adagio turning the whole school against each other with the Battle of the Bands idea. From the sound of it, Adagioâ€™s singing voice is done by Kazumi Evans. I have to admit, I surprisingly ended up liking the song and I think it’s better than the other two songs we’ve gotten so far.

To be honest, I thought the clip looked good. It got me interested and it could help me look forward to the film.

Also on a minor note, Octavia pops up in it. I thought that was a nice touch. (I partially prefer here over Vinyl. )