Alfa Romeo has been around since 1910. Â It has a long history as a automotive production company and racing manufacturer. Â Enzo Ferrari worked for Alfa Romeo before creating his own automotive company. Â Alfa Romeo did not come to the United States until the mid 1950s when Matt Hoffman imported an Alfa Romeo Giulietta, which he had converted into a spider. Â Alfa Romeo then imported more of its cars to America in 1961. Â Alfa Romeo stopped importing its vehicles in 1995. Â Then in 2008, Alfa Romeo made its return with the Alfa Romeo 8C Competizione.

Â I first saw the Alfa Rome 8C Competizione onÂ June 7, 2010, Classy Chassis: Concours d’Elegance, being held on the floor of Relient Stadium. Â In a stadium with Ferraris, Lambos, and Shelby Cobras, like the Veyron, I could not take my eyes off this car. Â Along with the Ferrari California, this was one of the most beautiful cars at the event.Â This is a piece of art with no bad angles on the car.

The Alfa Romeo 8C competizione was review by Jeremy Clarkson of Top gear, saying that is car is a work of art. Â Motorweek also reviewed this car. Â Both reviews can be found on Youtube. Â This car was drivable in Need for Speed: Hot Pursuit. Â Police got the coupe version, (you had to pay to drive it as a racer) and the racers got the spider version. Â It is also playable in Test Drive Unlimited 2

Final Thoughts: Â It is a work of art. Â There are no bad angles on the car. Â This is a great car to mark the return of Alfa Romeo in America. Â It captures the beauty, passion, and racing heritage of the Alfa Romeo brand. Â I cannot wait to see what Alfa Romeo brings over in 2012.

Originally posted on February 25, 2011 in the TGWTG blog section. 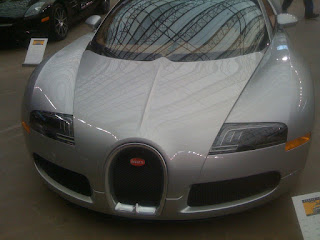