A Look at Disney: Disney & Oz 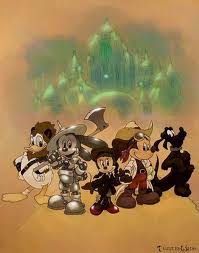 Hello & welcome back to A Look at Disney and for the past couple of days, I’ve had Oz on the brain. I attribute this in part to Oz being featured on Once Upon A Time but I didn’t know what to talk about. I do talk about the 1939 movie, what’s left to say. I do talk about the different film adaptions, there’s too many to cover in one article. That’s when I realized that Disney has had quite a history with the works of L. Frank Baum. And that’s why today, I’m taking a look at the various Oz related stuff from Disney. Side note, most of my familiarity with Oz is through the 1939 movie, which I love dearly, perhaps even more now that I’m older and Oz to me is the greatest fictional land ever imagined. As I’ve said before, this is a land that I would love to visit, if it were real. With that out of the way, let’s begin.

Interestingly enough, our article starts with the 1939 movie as Snow White and The Seven Dwarfs was a great influence on the movie and before Samuel Goldwyn had bought the rights and sold them off to Louis B. Myer, Walt wanted to make an animated Oz film. An animated Oz movie from Walt Disney. I wonder what would that would be like. I imagine, he’d only use the first book but it’s hard to imagine someone doing a movie Oz from that time, when the MGM movie is ingrained to the public conscious. Speaking of, two Disney voice actors actually lent their voices to this movie. Pinto Colvig, best known for voicing Goofy helped contribute to the sound of The Munchkins and Adrianna Castelotti’s voice can be heard during The Tin Man’s If I Only Had A Heart. Who is that you may ask? Why Snow White? 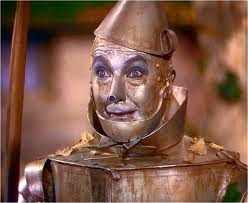 Her voice is heard delivering this line.

The people behind this movie even considered at one point bringing Walt on as a consultant for the film but that never came to pass.

The studio would later go on to purchase the film rights in 1954 to the 11 of the14 books set after the original story but still, nothing came to pass. However, Disneyland Records would release several records set in the land of Oz. I didn’t know about these I looked up Walt Disney Pictures on the Oz Wiki. 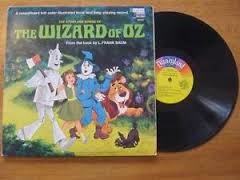 In 1957, Walt attempted to make a film titled The Rainbow Road To Oz, which would’ve featured the Mousetkeers in the various Oz roles such as Annette Funciello as Ozma and even promoted it on the Disneyland TV show. This D23 article has a video that goes into more detail but it rubs me the wrong way as it ignores a certain Oz film that even though, I’ve never seen, many people regard as a classic. When Walt shelved this film, he later went on to work on another live action musical that would star Annette Funicello. That being Babes In Toyland. 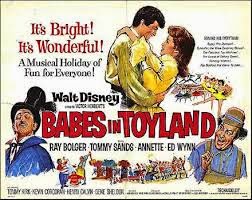 There were even plans for an attraction based on Rainbow Road To Oz to be installed at Disneyland, called Rock Candy Mountain. And the main villain, Barnaby in this film was played by Ray Bolger. that? Why The Scarecrow. 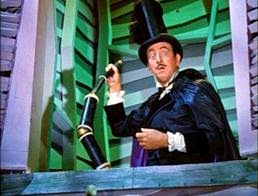 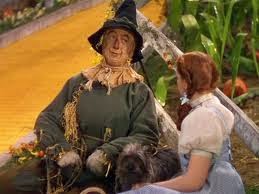 There were even plans for an attraction based on Rainbow Road To Oz to be installed at Disneyland, called Rock Candy Mountain. Who’s Scene would’ve included our Oz heroes celebrating a birthday for Dorothy and the ride was originally going to look like it was made out of rock candy by using crystals but Walt realized how difficult, this would be and at one point decided to use other types of candies. Walt ultimately scrapped the attraction as he felt there was something off about the ride.

It wouldn’t be until almost 30 years later, when Disney would finally get to tackle Oz because in 1985, they released Return To Oz. 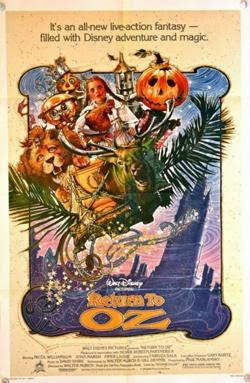 Now as I mentioned up top, I’ve actually never seen Return To Oz. I need to fix that one of these days as I’ve only heard good things about it. Now at the time of it’s release, it got mixed reviews from critics with some saying that it was too dark and intense for children but it has since gone to gain a cult following and the character of Tik-Tok is Epic Mickey 2 as one of the Beetleworxs Basher. that you have to go up against. Here is some concept art of Tik-Tok from the game.

And this version of Oz is featured in the Disneyland Paris Storybook Canal. 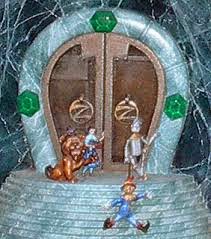 And for a brief period, Return to Oz was featured in the Main Street Electrical Parade. 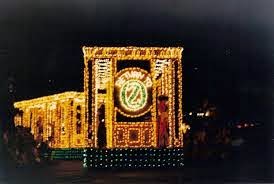 Then in 2005, we would get our second Oz movie from Disney, this time featuring the Muppets taking on The Wizard of Oz. 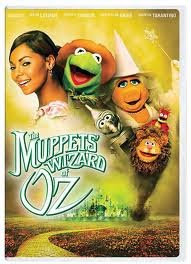 This isn’t easy to talk about as this is often considered the worst Muppet movie ever made and I’d have to agree. Unlike the previous adaptions that the Muppets did, it seemed more like they were making fun of the source then rather celebrating it and there were just so many odd cameos such as the one with Quentin Tarantino that stopped the movie to make it more like one of his films and have the Witch go out in a violent manner. What? And I have nothing against Ashanti but she could not keep up with the Muppets at all. The Muppet casting wasn’t bad but did the Flying Monkeys really need to be a biker gang? 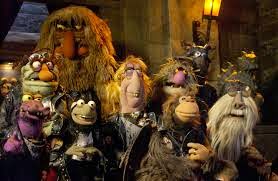 Who came up with that idea? This is just perplexing? And I have nothing against Miss Piggy as The Wicked Witch but it is a little jarring to see Miss Piggy play a villain and again, what is with the biker get up? 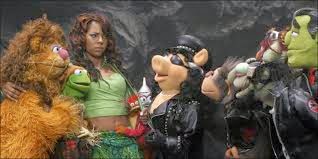 This could’ve worked but it had so many things working against it and I’m sorry putting a American Idol type show in your movie as Dorothy’s dream really dates the film. 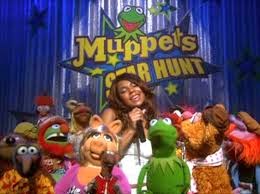 Ultimately, I’m just left asking why? As in why does this exist? Ah well, five years later, another Disney property would give Oz, the parody treatment as Phineas and Ferb did an Oz titled The Wizard of Odd.

This episode was cute and I like how it was dream brought on by Candace reading the Oz book and just like Dorothy, she sees people she knows as the inhabitants such as Isabella being the Glinda in this version and the Munchkins are called Patchkins, which ties into the Fireside Girls from the show and how they are always trying to earn patches.

And instead of The Lion, Scarecrow,and Tin Man, you have Baljeet as a Nerd Crow, who wants to be cool, Jeremy, who is a tree and Buford, who is some sort of mix between a lion, tiger, and bear. Oh my. And probably my favorite part is that Doof is The Wicked Witch. 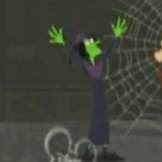 And just last year brought us two Oz related items from Disney released in the same month at that. First, there Minnie’s The Wizard of Dizz. Which was Mickey Mouse Clubhouse special that was a basic retelling with Minnie in the role of Dorothy, Goofy as The Scarecrow, Mickey as The Tin Man, Donald as The Lion, Pete as The Wicked Witch, Clarabelle Cow as the Glinda character and Ludwig Von Drake as The Wizard. And the one thing, I don’t get is they changed the Emerald City to the Pink Crystal City. Haven’t seen it but it sounds cute and it’s meant for a younger audience, I’m sure they’ll like it. 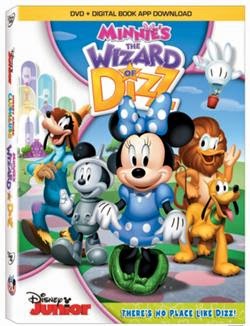 And then not to long after this came out, Oz: The Great and Powerful was released to theaters. This film tells the tale of how one Oscar Diggs became The Wizard of Oz and saved it from the Wicked Witches. And if you want my personal opinion, go read my review, which I’ll link to here. But in short, I really liked this movie save for maybe Mila Kunis as The Wicked Witch but other then that, this movie is one that I greatly enjoyed. 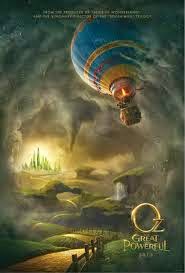 I really enjoyed James Franco as The Wizard and if you’ll recall my Top 6 Witches List, Evanora was # 1. Oh, and China Girl is awesome. 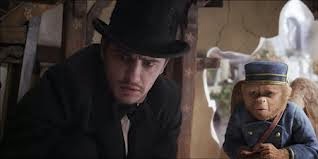 I loved this film from the visual look of Oz, which was gorgeous to Oscar’s growth over the course of the film to the final battle between Glinda and Evanora.

Again, really the only thing that brought it down for me was Mila Kunis as The Wicked Witch. She wasn’t scary, threatening, or intimating. 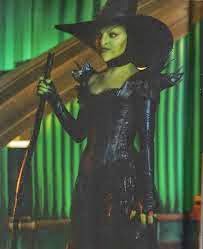 And I’m sorry, even though I loved everything about this film, The Wicked Witch should not be my biggest complaint with the character. They just really dropped the ball here.

There you have it, my look at the relationship between Disney & Oz and it still continues as The Wicked Witch of The West is the main villain in the second of the third season of Once Upon A Time. But if you want to know my thoughts on that, read The Magic of Storybrooke. Looking at everything else, it’s interesting to see how much Oz material there is from Disney and also to look at how the Oz things that Walt wanted to do but never got the chance to.

A Look at Disney