Lilo and Stitch was created by Chris Sanders who was a long time artist at the Disney studios for the majority of the Animation Renaissance. In 1985 much like Tim Burton before him he came up with an original idea for the studio. The idea was of a zany character named Stitch and actually drew a main design for him. The project didnâ€™t come up again until the beginning of the new millennium. Lilo and Stitch was made with Sanders writing and directing alongside Dean DeBlois. Sanders also provided the voice of Stitch. Due to the fact that it was an original idea the marketing department developed an awesome and ingenious marketing plan to introduce audiences to the character. The mock trailers (as out of character as some of them are) are hilarious!!!!!!!! I love that they got the original actors to come back for like 1 line in the trailers. Ariel throwing a starfish at Stitch was priceless!!!!! Itâ€™s also worth noting that Lilo and Stitch breaks a lot of Disney conventions such as the fact that itâ€™s not a musical and that this was more action packed garnering the film a PG rating which hadnâ€™t happened since Black Cauldron. Even with all of the new directions the film was taking it never left behind the heart and charm of classic Disney. Lilo and Stitch was released and did very well at the box office and was nominated for Best Animated feature at the OSCARS, but lost to Spirited Away, a Hayao Miyazaki movie that is absolutely phenomenal. The way I see it if youâ€™re going to lose, lose to someone who is genuinely better than you than someone who isnâ€™t. Lilo and Stitch is a great movie that combines humor, action and heart to bring us an unforgettable experience. 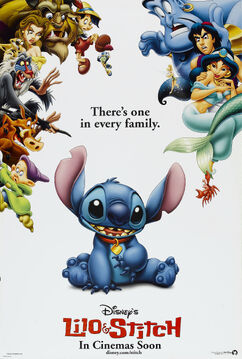 The story of Lilo and Stitch begins with something that a Disney film has never began with: a trial. The Galactic Council is deliberating the fate of â€œevil geniusâ€ Dr. Jumba Jookiba and his illegal experiment named Experiment 626. Dr. Juba Jookiba is sentenced to imprisonment and 626 is sentenced to exile on an uninhabited planet. Since Experiment 626 is a weapon and being of great destruction he escapes and steals a cruiser and heads into hyperdrive. The cruiser lands on Earth in the Hawaiian Islands and so The Grand Councilwoman goes to Jumba and sends him to retrieve 626 and to accompany Jumba The Grand Councilwoman sends a lower serviceman named Pleakley.Â  We then cut to Hawaii where we meet Lilo and weâ€™re introduced to her home life and that she doesnâ€™t have any real friends and it prompts her sister Nani to get her a dog. 626 was knocked unconscious by a truck and was brought to the pound and Lilo being the quirky one picks 626(the most odd looking thing in the cages) and christens him Stitch. The story carries on from there about the relationship and friendship between our title characters. Stitch grows in phenomenal ways and learns the value and meaning of family. In short Stitch convinces the council that he has changed and the Grand Councilwoman decides that Stitch shall serve his exile on Earth with Lilo and her family. This story offers plenty of comedic situations, but with genuinely heartfelt and real situations like Nani trying to impress a social worker so Social services donâ€™t take Lilo away (their parents are dead) is very emotional and so real and you really care about them. And how Stitch effects the family is excellent for his character development because he sees their situation and their pain and that is a main factor in him changing. I love it!

This film has very quirky and funny characters that carry quite a bit of emotional weight. Theyâ€™re a welcome change from the classic archetypes weâ€™ve come to expect from Disney films such as princesses, princes, sidekicks etc. Thatâ€™s a welcome change and the most important thing is that they still embody the best of Disney. These are the characters of Lilo and Stitch!

Stitch was created to cause great destruction, reverse road signs, clog sewers, and steal everyoneâ€™s left shoe. When he finds himself on the more nature inhabited of the Hawaiian islands named Kauai he canâ€™t carry out his destructive functions properly. It is here where he needs to reevaluate his entire existence. He has to find a new meaning to his life and a place to belong. This is easier said than done because he causes great grief for Lilo and her family due to his destructive instincts and genuinely feels guilty because of it. He wants to feel the emotions that we take for granted everyday and struggles with his destructive urges. He does eventually overcome his destructive instincts and saves Lilo from Captain Gantu and has finally found something to protect and a place to belong.

Lilo is a quirky little girl who doesnâ€™t have many friends and lives with her sister Nani. She loves Elvis Presley music and any weird thing. When she adopts Stitch she tries to tame him and for the most part it doesnâ€™t work, but the more the situation with Social Services worsens the more caring Stitch becomes and what results is an unwavering friendship!

Dr. Jumba is a self proclaimed â€œevil geniusâ€, but is more of a goofball than anything else. He was hired by the Galactic Federation to recapture 626, but has his own motives of redesigning him to make him better, but with Stitch finding a home on Earth he doesnâ€™t want to go. The events of the climax soften Jumba up and he has a new life on Earth and in a way becomes part of Stitch and Liloâ€™s new family.

Pleakley is a member of the Galactic Federation that was sent to supervise Jumba during the capture of 626 and was hired because of his expertise on the planet known as Earth. He is a stickler for rules, but is not beyond compassion allowing Stitch to rescue Lilo (a civilian) from Captain Gantu. He is a pretty big comic relief foil to Jumba and the moment where he becomes dinner for a huge flock of mosquitoes is hilarious. Like Jumba he becomes part of Liloâ€™s new family.

Nani is a very hardworking individual who tries to provide for Lilo, yet she can be slightly irresponsible and careless especially when under stress. She fights with Lilo as all siblings do, but it is very clear that she does love Lilo. When Stitch enters her life things in some ways get worse because itâ€™s mainly due to his antics that she loses job opportunities. Itâ€™s her emotional times with Lilo that Stitch learns the meaning of Ohana and when things are at their bleakest Stitch reminds Nani of what her sisterly bond with Lilo has taught him.

This is a very different villain. This is another welcome change. Heâ€™s not really evil itâ€™s just that he carries out his orders in a very careless and irresponsible manner. When he captures Stitch he has total disregard for the safety of Lilo who is a civilian. Itâ€™s this aspect of his character that made me dislike the change that came in Stitch the series. He may be irresponsible, but he still has the dignity of a soldier and would never be Hamsterveilâ€™s sidekick. But his portrayal in this film is very good.

As I said before this film breaks tradition by not having this be a musical. The film supplements by insert songs sung by Elvis Presley, but itâ€™s done in such a way that itâ€™s more there for fun as opposed to forcing it into the story. The one song that is emotionally relevant to the plot is the really emotional moment of Nani singing to Lilo â€œAloha Oeâ€. That is a beautiful scene and Stitchâ€™s expressions (not dialogue) is what makes the scene even better. The original Hawaiian style songs are done by Alan Silvestri, Mark Kealiâ€™I Hoâ€™omalu and the Kamehameha Schools Childrenâ€™s chorus to add authenticity to the gorgeous surroundings of Hawaii. Here are some of those moments now.

He Mele No Lilo

If you havenâ€™t been to Hawaii you must go someday. Itâ€™s an absolutely beautiful place. Iâ€™ll never forget the experience of seeing the lush and beautiful environs. The film captures the beauty of Hawaii perfectly and Sanders actually had the idea of bringing back an animation style that hadnâ€™t been used in a long time called watercolors. He believed watercolors would make the colors and environment stand out more and he was absolutely right.

I love this movie. It has humor, action and heart with great characters, great art direction and best of all great imagination and creativity. Join me next time where my Gummi Ship has found its destination just in time for the Christmas and the Holidays. Thatâ€™s right the World Showcase returns with Halloweetown/Christmastown!!!!!!!!