The History of Phantom Manor

I have been away from the blog recently because I went on a research trip to the town of Thunder Mesa. The residents were nice, but they did seem a little on edge that an outsider came to their town asking questions. I had to actually show myÂ  proper paperwork and identification to get access to their records in City Hall and the library. I went to the town to get an understanding of the history of the town as well as the fabled Mansion on the hill across the river. This is the story and information that I have gathered.

Thunder Mesa was originally an oasis in the desert. The River of the Far West was a precious resource to the Native Americans that inhabited the area. The river made it possible to have a fair amount of crops to keep a small town level population well fed. However, these things are not what attracted white expansionists to the area. It was the sacred mountain that was rumored by fur traders to have gold. The translation from the original Native American name is Big Thunder Mountain. When the whites drove the Native tribe off the land they claimed Big Thunder for themselves. They built a town and named it Thunder Mesa, small farms were established and small shops started to emerge. For all the success it was perfectly understandable that no one payed attention to the Natives’ warning before they were kicked out. 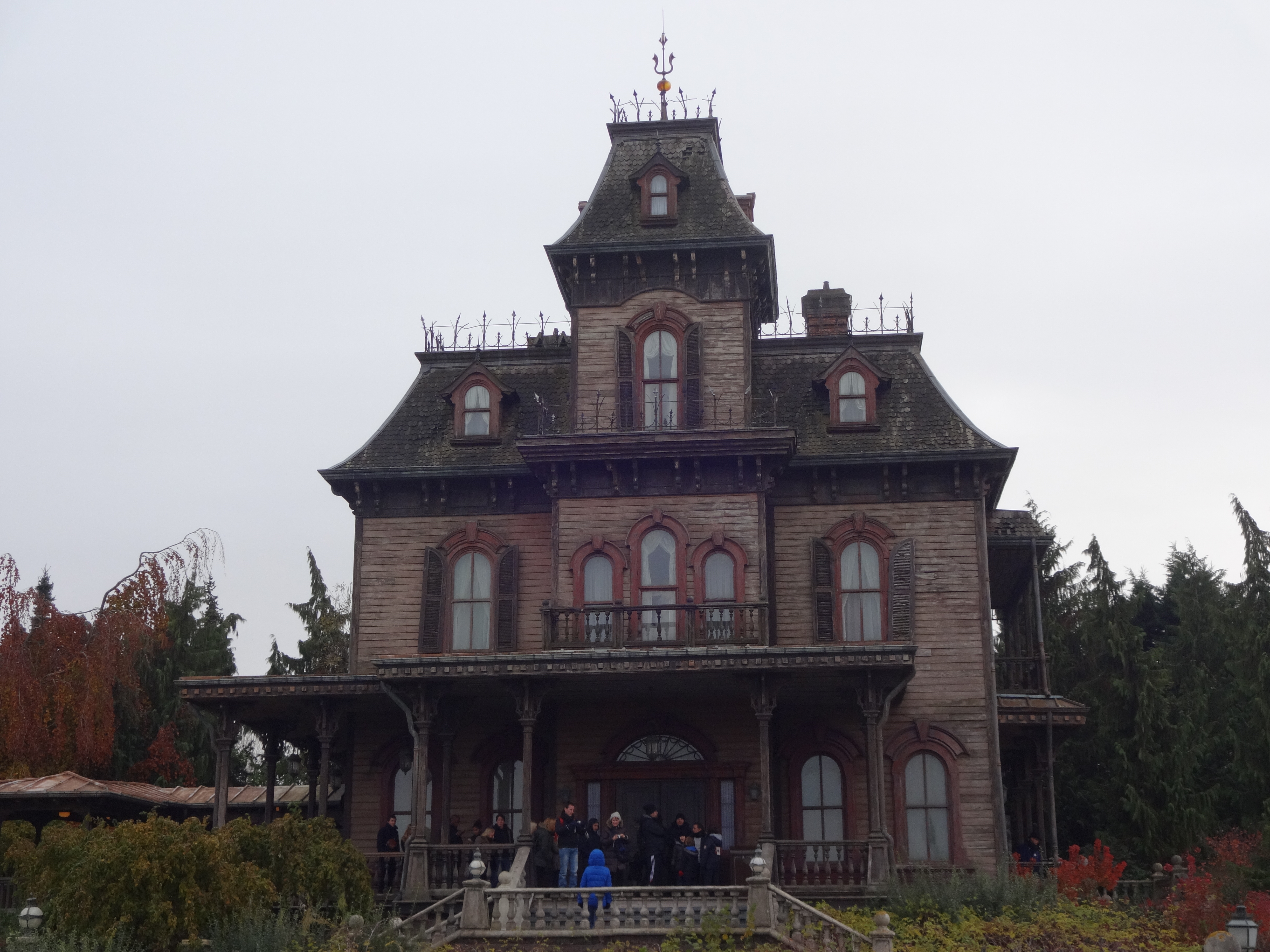 “Big Thunder Mountain is a sacred mountain. A monument of nature and it is a gathering place for the spirits. The mountain had many riches. Natural riches such as plants used for medicines and divine riches (gold, the natives didn’t understand the monetary value of it). The spirits of the mountain forbid anyone from defacing it for selfish reasons. If the mountain is defaced then the mountain will exact vengeance in a mostÂ horrific way. “Anonymous Native American deportee

But the Mountain was defaced. No one defaced that mountain more than the ambitious entrepreneur Henry Ravenswood. Ravenswood was a successful businessman from New York who moved out west when he heard the rumors of gold on Big Thunder. He had plenty of resources, connections and money to purchase mining equipment to get a huge head start. Competition in the mining business of Thunder Mesa was a fantasy. Ravenswood flaunted his wealth by building a beautiful and extravagant Manor house on a Hill across the river from ThunderÂ Mountain. If one looked at it from a distance the Manor looked like it loomed over Big Thunder letting everyone know that the mountain belonged to Ravenswood. Once the house was completed he sent a letter to his family to come on down and live with him in the new home. His daughter Melanie was not happy about the move. (It’s rather disappointing that I can only quote a handful of things because a good portion of the records were destroyed in an event that I’ll discuss in more detail. I was literally reading half burnt documents and some had water stains.) She often commented on how her father was “extremely controlling” and took away all aspects of free will. According to an account of various rumors and urban legends amongst the descendents of the original settlers Melanie, and her mother were rarely seen outside the Manor’s walls. Although Melanie could be seen occasionally in the gazebo listening to her music box and daydreaming about how she would escape her father’s control. “Her eyes and her face said that she wanted to be free” said Johnathan Foster in his diary dated July 3rd 1876. Johnathan’s family especially his son would become extremely important to the history of the Manor and the town. Mr. Ravenswood acted the way he did because he was a very possessive man. Once he had something he was not going to give it up. He saw his own family as property that he didn’t want to lose and that is the reason why he refused to have Melanie get married even if it meant extreme monetary gain on his part. But as fate would have it Melanie was going to marry. She met Johnathan Foster’s son Max. The Foster family was a dirt poor family that didn’t have anything to offer Melanie, but love was enough for her. She obviously kept this a secret from her father and her mother did her best to keep it from him. According to many journal entries and rumors and stories passed down through generations about the two they were madly in love. They were affectionate and possessed all the qualities of a lovely couple. The townsfolk kept silent on the relationship mainly out of spite and jealousy against Mr. Ravenswood, but either way the couple stayed together. That is until Mr. Ravenswood stumbled upon them in secret and watched as Max proposed to Melanie. During my visit to the Manor’s study I found Ravenswood’s diary and I flipped to the day that Melanie labeled in her diary as the “Greatest day of my life!” Henry’s entry said “THEY WILL BURN!!!” Melanie may have thought that the proposal was the best thing that could have happened to her, but by accepting she would have to throw away practically everything in her old life. She needed to get away and think. She went on a trip to a neighboring town with the Foster family to buy food and other supplies because they didn’t want to buy food from a store that was owned by Ravenswood’s monopoly of the town’s businesses. While Melanie and the Foster family was away a terrible event happened. The warning that the Native Americans told the people of Thunder Mesa came to fruition. The horrific event that shook the area literally was a whopping 9.5 earthquake. The entire layout of the city was completely changed. Interestingly enough the Manor still stood and didn’t get destroyed by the quake. The locals say that the spirits wanted to torture Ravenswood by having his greatest achievement still stand as a reminder of how far he’s gone and how it came crashing down. Melanie and the Foster family returned to the ruins and were shocked and mortified at the destruction, but they were determined to gather the survivors and take care of them so that they could rebuild. With Melanie’s family dead and gone and the majority of her family’s fortune gone with them she couldn’t keep the Manor in good shape and she could barely afford to stay there with Max, but every dime she earned through her businesses that were rebuilt went right back to the town so that things could get back to normal. Unfortunately for her things would get worse. After the town was rebuilt (over the old one of course and creating very interesting underground ruins) Melanie and Max’s wedding was getting underway. Everyone was so happy especially the couple. Melanie and Max have felt a foreboding presence in the house ever since they moved in, but they merely thought it was nerves. On the day of the wedding Max took a stroll around the house to calm his nerves and ended up in the attic. Max saw an image of Henry Ravenswood’s ghost and Max was shocked. Henry and Max fought, but Henry won and he tied a rope around Max’s neck and he hung Max in the attic. Melanie was worried about Max and waited for him all day. The guests thought that Max had run out on her and the Foster family was disgraced. Melanie never lost faith in Max and waited for him every day. One day when she was in her late 60s she still waited for him, but unfortunately Henry came to reclaim her and drag her to hell. Despite her great efforts to get away from him she failed and Henry claimed her soul never to be with the one she loves. I’ve heard many rumors that the spirit of both Ravenswoods and Max are not at rest and that Melanie and Max wait for Henry’s ghost to be defeated and their souls released with Henry making sure that never happens. The townsfolk have a renamed the Manor Phantom Manor and have a saying about it “They say beauty once lived in this house. Some say beauty lives here still.” When I went to the house I did feel really strange. I could swear I heard a woman’s beautiful singing voice and I also felt a dark presence watching my every move as if to make sure I didn’t stay too long. As I left I finally saw all the proof I needed to prove to myself that the story was true.Â  I saw Melanie’s image in the Foyer mirror and I’ll never forget the expression on her face. She looked at me with hope. That I was her only hope. I could see the pain and suffering on her beautiful face and I made a promise to her that once my training as a keyblade master and Disney review is complete that I would have the skills needed to save her and that I swore that I would return! Then I thought I heard a sinister voice say to me “I’ll be waiting”. I flipped off the presence in the general direction where I heard the voice and left. Even though Henry’s hold on the town isn’t as strong as it was the stain of Mr. Ravenswood’s tyranny over the town back then is still there and has turned the town into a very uneventful town that has virtually no tourism and has fallen into relative disrepair and seems to be mundane and the people are stuck in a cycle of boredom and blandness.

I would like to thank doombuggies.com for a basic explanation of the story! Most of the other details of the history I came up with on my own. Join me next time where I actually review Phantom Manor and examine of the actual presentation of one of the finest stories Disney has ever told and one of the best attractions ever created! See you then!