By the year 1990 the Disney Animation Renaissance was in full swing with the quality and popularity of The Little Mermaid. The song writers of that film Howard Ashman and Alan Menken were trying to get an animated feature film project off the ground that was based on a story in the anthology of Arabic myths, legends and folktales called 1001 Arabian Nights. It was called Aladdin. When another Disney animated feature in development (Beauty and the Beast) was changed into a musical, Ashman and Menken were summoned to work on that project and had to divide their time between Aladdin and B&B. The duo wrote songs for both films and as B&B was winding down they focused more on B&B. Then the tragic event of Howard Ashman’s death hit home and was a serious blow to the crew of both movies. When B&B was released it was a HUGE success and was the first animated feature ever to be nominated for an OSCAR for Best Picture. The message sent by B&B’s success was clear. The next film would have to bigger and better than any of the other films. Ladies and Gentlemen, this is Aladdin!

The story begins with a traveling merchant that tells the back story of a lamp in his stock. The evil vizier Jafar has found the Cave of Wonders (the lamp’s original location) in order to find the lamp and use the genie inside of it to take over Agrabah. With the villain established the story of an orphan wanting to impress the Princess Jasmine and forming a great friendship with a genie. The theme of being yourself and using the real you instead of a facade to prove your worth is still very strong. The film was a phenomenal success and was the first animated film to surpass over 200 million dollars in America. What else can you say? It’s a funny entertaining film!

This film has amazing characters. There are also a lot of characters. I’m only going to talk about the major characters of the film. 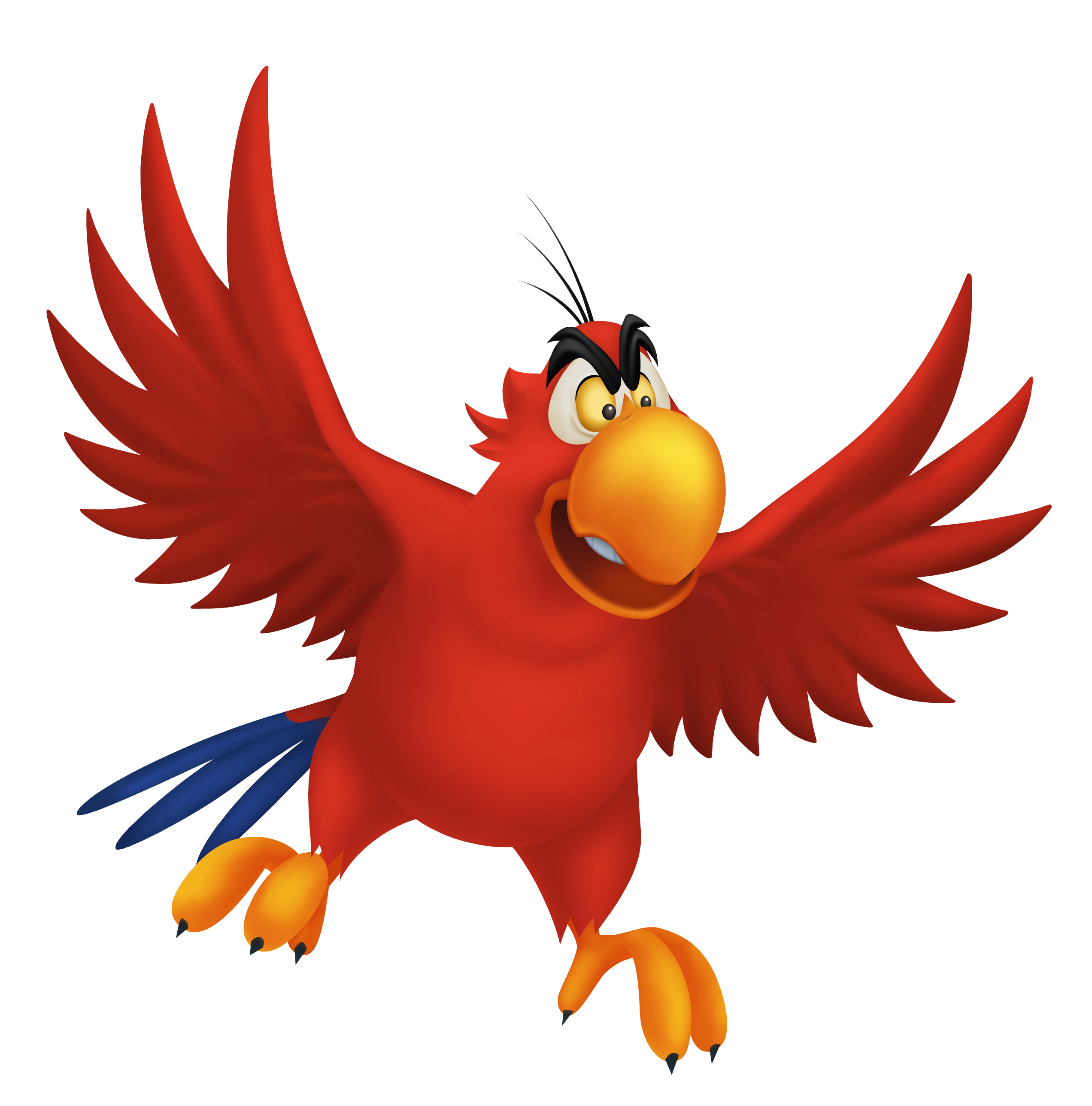 This is Jafar’s lackey and he will play a big role in the sequels and TV show to come. His snarky humor and pessimism in it’s own way is endearing and these character traits will be discussed in more detail in the next review. Plus Gilbert Gottfried does a very good job at capturing the character which in a way is a caricature of himself. 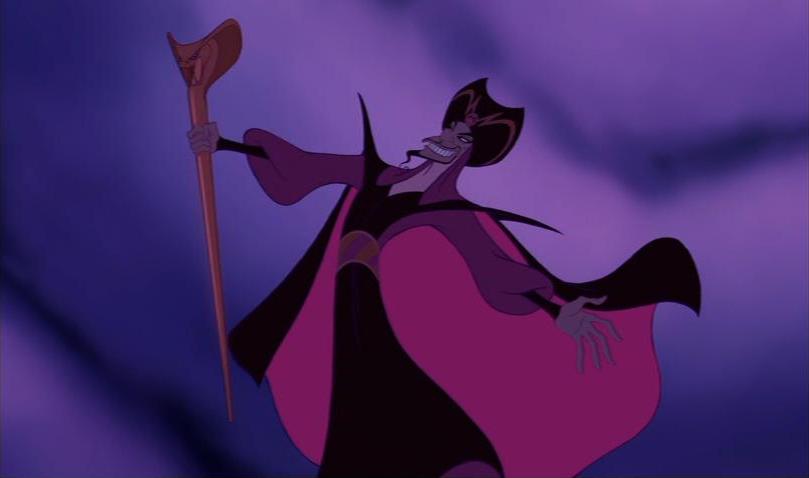 This is a great villain. Sure his motivations are very simple, but he has such presence and sophistication and a great design by Andreas Deja and a great performance by Johnathan Freeman. He is also one of the more powerful villains because Aladdin barely defeats him. Only by trickery and deceit is Jafar defeated and even then he’s only imprisoned in the lamp. 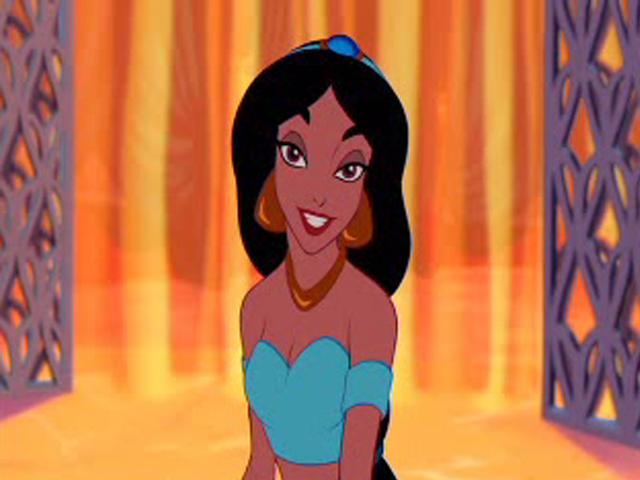 Jasmine is much like her two predecessors. She is headstrong and has a very clear opinion how her life is and how it’s good and how it’s bad. She wants independence and wants a say in how she will marry. She gets more development later because the movie was about Aladdin and her development in this film is limited. She is also very beautiful.

Arguably the most popular character in the film. Robin Williams and Eric Goldberg make this character. Robin Williams may have improvised most of the dialogue, but he stuck to the script where it was most meaningful, in the genie’s curse and desire to be free. Eric Goldberg had the daunting task of keeping up with Williams’ energy and enthusiasm and he captured it very well. 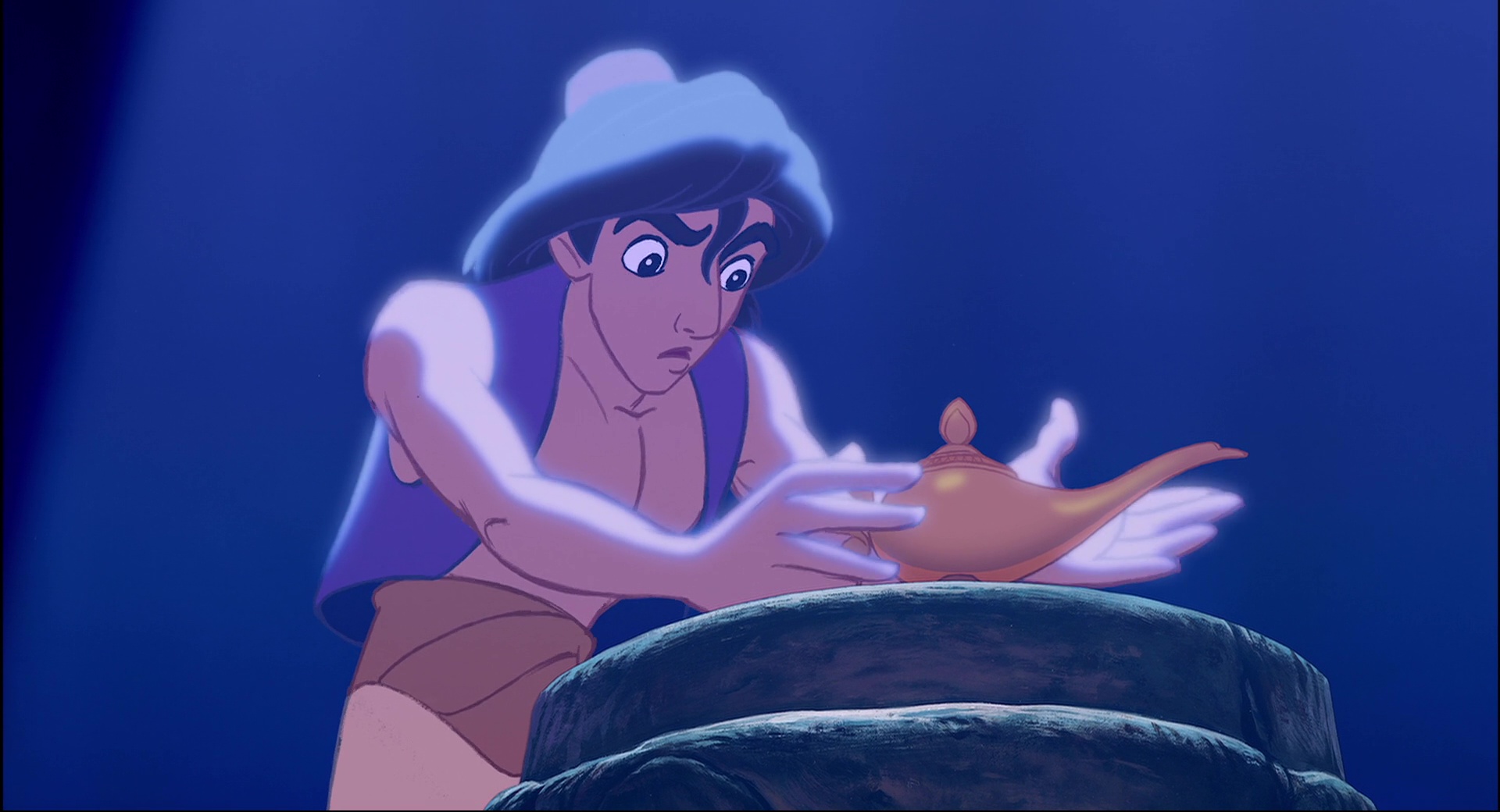 The hero of the film. He has humble beginnings and he needs to learn that it’s his humble and kind personality that makes him worthy of not only the lamp, but the love and affection of Jasmine. Scott Weigner (I hope I spelled that correctly) gives a great performance and Glen Keane designed a character that could conceivably ditch a set of professional guards. That agility would come in handy when he would develop combat abilities in the Kingdom Hearts series.

The songs in this film have become very popular. The thing that’s special and somber about these songs is that the majority of them are the last songs that Howard Ashman wrote. Tim Rice was brought on board to write the lyrics for two songs that would be named One Jump Ahead and A Whole New World. These are the songs of Aladdin!

This is a great song to introduce us to the world of Agrabah. The song sets up the film to be an exciting adventure! Admit it. You want me to talk about the controversy surrounding this song don’t you? Apparently the Muslim community took offense to one of the lyrics. “Where they cut off your ear if they don’t like your face. It’s barbaric, but hey it’s home!” I personally believe that this lyric speaks more about the culture of Agrabah as opposed to Muslim culture and the religion of Islam. Either way this lyric was cut from the film, but still can be heard on the soundtrack.

This is a great introductory song for our hero. It’s also a great introduction to Tim Rice’s lyrics. Tim Rice captured the quick witty lyrics of Howard Ashman without losing his own style. This is great because it has the same lyrical feel for the sake of consistency while not interfering with Rice’s way of doing things.

My personal favorite song of the film. Robin Williams perfectly captures the energy and snappy lyrics of Howard Ashman. The song is pure fun to listen to and to watch. The elements of Jazz and Swing in the vein of Fatz Waller and Cab Calloway is done very well and was Ashman’s idea. Needless to say it worked brilliantly!

Again another great Ashman/ Menken song. The clever lyrics are back. It makes me wonder where Howard Ashman came up with all the extravagant stuff for Al to”own”. This may not have been a main showstopper like the previous song, but it comes really close.

This is a great mocking of Prince Ali. They needed to give Jafar a song of some sort and even though it’s short it’s still a very amusing song and captures the fact that Jafar is large and in charge and just how powerful he really is.

The art direction of this film is very nice. They architecture was very round and curved as opposed to rigid and hard edges. The designs were very well done and the design of the Cave of Wonders head using the CAPS system was awesome!

This is a classic film that is a beloved part of the Disney Renaissance and deservedly so. It’s characters, music and humor still hold up to this day and much like Atlantica before it would develop into a bonafide universe.

Join me next time where I take a look at what I think is a very underrated sequel and features an unexpectedly endearing story of friendship, courage, and redemption in Return of Jafar!