Season 1, Episode 19
The One Where the Monkey Gets Away 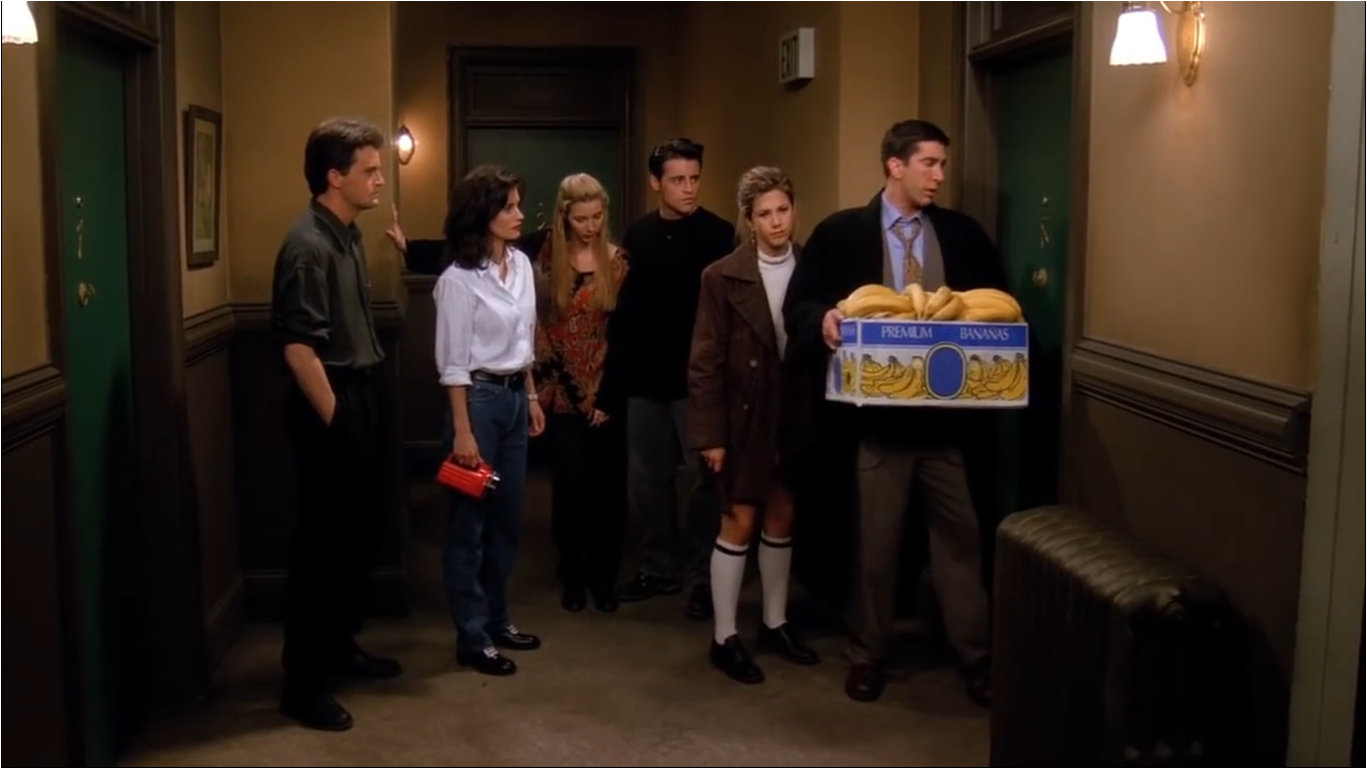 Plot Summary-When Rachel loses Marcel the gang splits up to look for him. Rachel is upset that Barry is getting married so fast.

Funniest Line–â€Oh, this is so intense. One side of my butt is totally asleep, and the other side has no ideaâ€â€¦.Phoebe

Nitpickof the episode-Am I the only one who thinks that the very idea of letting Rachel watch Marcel alone was really stupid?

Syndication Edit-The opening teaser with Rachel which is an old joke but a good one, thetag was longer

Final Thoughts-Well, you knew there was going to be a Marcel episode coming, and here it is. And the truth is this episode is pretty good. Yeah I could complain thatthere is only one story here but by this point the characters were clicking sowell that the gags and jokes still work. The characters are all on: Monica isin charge; Phoebe is spacy, and so on. I never liked Marcel because all he didwas distract from the main characters (and according to David Schwimmer, madefilming these episodes an agony). But this episode we even get a littlecharacter development as learn Rachel was not very nice in high school.

Grade=B,much better than it needed to be

Season 1, Episode 20
The One with The Evil Orthodontist

Plot Summary- Barry and Rachel start dating again despite his being engaged to herbest friend. Chandler obsesses over a woman who has not returned his phonecall. Someone is spying on the group with a telescope across the street.

Funniest Line-â€œI can’t believe my parents are actually pressuring me to find one of you peopleâ€â€¦.Monica

Nitpickof the episode-The story of the person with the telescope not only has no payoff, but is just dumb. Yeah the group may spy on Ugly Naked Guy once in awhile but never with a telescope! Call the police on this stalker!

Standout Character-Chandler; this is the first episode it truly feels like Matthew Perry has the character down pat

Final Thoughts-This episode has one basic problem. There is only one real story,about Rachel dating her ex-fiancÃ©e. The problem is that the story is not enoughto carry a whole episode, and the whole thing is flat by the end. All she doesis learn something she already knew! Chandler is the only thing perking thisshow up with his obsessive antics with the phone. Yeah the other story is aboutsomeone spying on the group with a telescope, but man does that gonowhere!They need to tack on the stuff about Joey in the end to just to pad the showout!

Grade=C+,not enough story does not a great half hour make

Season 1, Episode 21
The One with the Fake Monica

Plot Summary-Monica makes friends with the woman who stole her credit card; Ross hasto give Marcel away. Joey decides to change his name.

Funniest Line-â€œIt’s madness, madness, I tell you! For the love of God, Monica,don’t do it! (In her normal voice) Thank you.â€â€¦.Phoebe

Nitpickof the episode-The obvious, the fact that Monica chooses to get to know thewoman who stole her credit card is one of the dumbest things ever on this show.Then it gets worst, but more on that in a second.

Standout Character-Ross; I do feel sorry for him losing Marcel even if I am veryhappy that the monkey is gone

Final Thoughts-I called an earlier episode the worst of the season, if so that makesthis the runner up! My lord is the episode awful! Not the Marcel story, that isnâ€™t so bad (and yes I am happy he is gone) but the main story is just bland !The very idea Monica would make friends with this woman is crazy, and then thatshe would be having so much fun and throw away her personality is toomuch!Â  I love good character development,but not when you have to abandon the entire character to do it!! The worstthing is that this is all forgotten right after the episode, which makes thiswhole story pointless. Oh, and are we really supposed to care when the fakeMonica is arrested? Â I just donâ€™t knowwhat to make of this one. Yeah it is sad seeing Ross say goodbye to Marcel. AndJoeyâ€™s story is really just two scenes, setting up the Joseph Stalin joke andthen paying it off. Is it me or does Phoebe act exceptionally weird in thisone?

Season 1, Episode 22
The One with the Ick Factor

Funniest Line-â€œOh, come on tell me. I could use another reason why women won’t look atme.â€â€¦.Chandler

Nitpickof the episode-Why is Rachel so embarrassed about her dream?

Standout Character-Chandler, as he deals with the repercussions of his promotion

Final Thoughts-Yet another Monica story, but this time it works because she doesnâ€™t have to abandon her entire character! It also works because once Monica hears the truth about Ethan she ends it, which makes us forgive her having sex with aminor. The Rachel story feels like an idea the writers had but didnâ€™t know howto flesh it outâ€¦so they didnâ€™t! It goes nowhere. The Chandler/Phoebe story isreally good because it seems logical that being promoted will cause hisco-workers to see Chandler differently. Itâ€™s a good observation and I like howin the end Chandler just accepts and has funs with it.

Grade-C+,Rachelâ€™s story is so pointless

Season 1, Episode 23
The One with the Birth 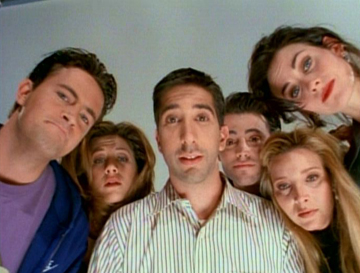 Plot Summary- Carol goes into labor. Monica wants a baby of her own, Ross and Phoebe end up trapped in a closet, Rachel hits on the cute doctor

Nitpickof the episode-While itâ€™s very funny and the scene works for the most part, the fact that Ross and Phoebe get locked in a closet IN A HOSPITAL is really hardto buy

Standout Character-Ross; he did a really great job here and the all seasonexpressing his anxiety at being a father. Itâ€™s too bad Ben would be forgotten about for much of the series

Syndication Edit-Chandler commenting that Ross and Phoebe are missing, the tag is longer

Final Thoughts-This is a real solid episode. Ok, the way they named the baby is kindof corny but Ben isnâ€™t the worst name either. Monica and Chandler foreshadowtheir relationship in a great scene, and while Rachel hitting on the doctor iskind of lame the joke that ends the story is one of my favorites. No wonderJonathan Silverman got his own TV show the next year, but did have to suck?Sorry, getting way off topic. Joeyâ€™s story is sweet but in the end ismeaningless really. The tag is one of the sweetest ever with Ross talking tohis new son .There would be a few birthâ€™s on this series and the first one isreally just a very well done episode.

Season 1, Episode 23
The One Where Rachel Finds Out

Plot Summary- Rachel learns Ross has feelings for her just after he has left for China.Joey donates to a sex study.

Funniest Line-â€œWell, given that he’s desperately in love with you, he probably wouldn’tmind getting a cup of coffee or somethingâ€â€¦.Joey

Nitpickof the episode-Since this is such a solid episode I am going to pick on Carl,the guy Rachel is dating in this one. What a jerk! Just a tip, if you want the girl to like you ranting like a loon about something stupid isnâ€™t the way to do it.

Standout Character-Rachel, no question here as the way she handles the news is doneperfectly. And when we see Ross getting off the plane with Julie, we feel sobad for Rachel and couldnâ€™t wait to see what happened next.

Syndication Edit-The original opening with Ross showing pics of Ben to the guys, moreteasing of Joey, Rachel revealing she missed Ross at the airport

Final Thoughts-Well, we knew it had to happen and finally Rachel figures that Rosshas had a thing for her all this time. They handled it very well in this episode.Normally I would complain that this episode is short on stories but somehow itworks here. Joeyâ€™s story is obvious filler but does make for some laughs. This was just a great way to end the season. I will talk about this more but I likehow the season ending cliffhangers on this show actually led to changes in theseries, unlike shows like Will & Grace where the dramatic cliffhanger wouldalmost always be undone and everything would be back to status quo by thesecond episode of the next year.

Next week we dive in season 2!!