Plot Summary-Joey buys Chandler a tacky bracelet. Rachel tells Ross to accept that they will never be together, but a prom video found by Monica may change that.
Funniest Line-â€œOh, I thought that’s what they used to cover Connecticut when it rains.â€â€¦.Chandler
Nitpickof the episode-I think Chandler should have been honest with Joey about the bracelet, and just said he appreciated the gesture but it wasnâ€™t for him. I always wondered how the rest of the night went after Ross got dressed in the tux, his parents must have been apologizing all night!
Standout Character-Monica, this was a tough choice but I love her in the fat suit here because Courtney Cox doesnâ€™t play it silly like she will later on.
Syndication Edit-The scene at the end of act 1 between Ross and Rachel was longer
Final Thoughts-This is not a perfect episode but itâ€™s about as strong as you can get. I say that because everything leading up to the prom video is pretty standard.But when we get to the prom video, we get some very well done stuff. So much greatness is in those few minutes. We get funny lines, hilarious sight gags,character development, drama when we feel Â forÂ  the crushed Ross after Rachel unintentionally leaves him standing there, and of course the fantastic Â conclusion when Rachel walks across the quiet floor and gives Ross a kiss without saying a word. Perfect! Go ahead; watch that without getting misty I dare you! Yeah Joey & Chandlerâ€™s story is filler but itâ€™s really good stuff which doesnâ€™t drag the episode down so I will let it go.
Grade=A+,itâ€™s considered the best episode for a reason
Season 2, Episode 15
The One Where Ross and Rachelâ€¦.You Know
Â 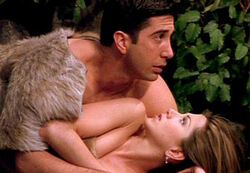 Plot Summary-Joey buys a big screen TV, Monica gets a catering job with her parents friend Richard Burke, Ross and Rachel have their first official date.
Funnies tLine-â€ Who’s Richard Burke? Doc, Doctor Burke? You have a date with Doctor Burke? Why, why, why should that bother me? I, I love that man. He’s like a uh,brother to dad.â€â€¦.Ross
Nitpickof the episode-It does come up once, but with all the time Joey and Chandler sit there and refuse to move donâ€™t they have to go to the bathroom every so often?
Standout Character-Rachel, her laughing while she and Ross start kissing is very well done and makes perfect sense
Syndication Edit-Mostly scene extensions
Final Thoughts-It amazes me how different this part of the season is from the first.We have Ross and Rachel together, Monica in a happy relationship, and Joey successful. Of course all this would be undone eventually, but for now itâ€™s fun to enjoy. I wish I could say Joey and Chandlerâ€™s story was hilarious in this one, but having them sitting there for the whole episode gets old. Sure some of the gags are funny but by the end it is just boring. Monica meets her new guy,who is a tad older. Tom Selleck did a great job in this role; I never doubted he loved her for a second and their chemistry was great. And I was glad to see Rachel feeling awkward since going from friends to lovers is not easy and thisepisode handles that weirdness very well. And that final scene in planetarium?Just gold.
Grade=B,Chandler and Joey waste our time as they waste theyâ€™re own
Season 2, Episode 16
The One Where Joey Moves Out
Â 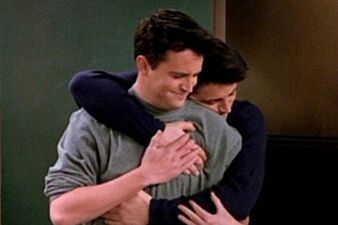 Plot Summary-After a fight with Chandler, Joey decides to move out. Rachel and Phoebe decide to get tattoos. At her fatherâ€™s birthday Monica and Richard try to keep their relationship a secret from her parents.
Funniest Line-â€œWoah, woah, woah. I don’t need a roommate either, okay? I can afford tolive here by myself. You know, I may have to bring in somebody once a week to lick the silverware.â€â€¦Chandler
Nitpickof the episode-Totally on Rachelâ€™s side at the end when we find out what a wimp Phoebe is. Â Especially the way she tries to rationalize her not getting the tattoo. I would have been harder on her, it was her idea!
Standout Character-Monica, it is nice to see her stand up for herself with her parents regarding her seeing Richard
Syndication Edit-Longer first scene and we see Ross, Monica, and Richard discuss not telling her parents as they arrive to the party, the tag where Monicaâ€™s father comes over
Final Thoughts-Itâ€™s story arc time! And what a decent one it is to. We really explore the characters of Chandler and Joey through these episodes. In fact this iswhere the whole â€œis Chandler gayâ€ rumor started. Heaven forbid a guy has a male friend and not be sexually attracted to them at the same time! Anyway we get a strong episode here except the whole Phoebe/Rachel story is kind of weak. Lotsof laughs from Monicaâ€™s story though, and the reveal of her relationship with Richard is handled very nicely.
Grade=B+
Season 2, Episode 17
The One Where Eddie Moves In
Â

Plot Summary-Phoebe is discovered by a record producer. Monica feels like a kid again with Ross around all the time. Chandler gets a new roommate.
Funniest Line-â€I did. I thought it’d be great. I figured I’d have, like, time alone withmy thoughts, but, you know, it turns out I don’t have as many thoughts as you’d think.â€â€¦.Joey
Nitpickof the episode-Um, is Ross really over that much more than he used to be now that heâ€™s dating Rachel? And if he is, why donâ€™t they spend more time at Rossâ€™sapartment since he lives alone? I think this story fails because we have seen how close Ross and Monica are now and that should cancel out childhood flashbacks(ok, the diaphragm joke is funny).
Standout Character-Chandler, see why below
Syndication Edit-a gag with a pie in a guyâ€™s hood, check out the DVD; Joey bored in his newplace, the smelly cat video is longer as is the tag
Final Thoughts-This episode tries, but it seems like the characters had to change to make the stories work. What is Monicaâ€™s problem? Why is Phoebe such an idiot? Why did Joey change his mind about moving out so fast? The only character who feels normal is Chandler, though even then I could question why he asked Eddieto move in when he barely knew the guy. Yes the smelly cat video is cute but is Phoebe really as dumb as she comes off here? And as I already stated, is Ross really over more than he was before he started dating Rachel? The thing saving this one is the Chandler/Joey story which is very strong. The tag is great with Phoebe singing Smelly Cat with the whole group in the coffee house, and is longer on the DVD.
Grade=C+,raised it to a + because of the tag but the episode feels like the writer knew nothing about the characters
Season 2, Episode 18
The One Where Dr Ramoray Dies
Â

Plot Summary-Joey gets into trouble on his show after a dumb comment. Chandler discovers Eddie is not quite right. Monica and Rachel argue over a condom.
Funniest Line-â€œBecause sometimes, Phoebe, after you sleep with someone… you have to kill a fish.â€â€¦Chandler
Nitpickof the episode-Ok this one has bugged me for a long time. Follow me on this,this is how it happens. Monica, Richard, Ross, and Rachel leave the coffee house for the apartment. We then get Chandler arguing with Eddie, Joey coming into the coffee house with the Soap Opera Digest, a cut to a writer angry about Joeyâ€™s comments, and then another cut back to Joeyâ€™s apartment where he gets the new script. THEN WE SEE THE FOUR GET TO THE APARTMENT! Wow, it took a longtime for them to make that walk and we know that Central Perk is not far from their apartment at all. Then the next day, the episode of Days with Drake getting killed has already been shot and aired! Wow that was fast too! Good editing, whatâ€™s that?
Standout Character-Joey, you got to feel bad for the guy. He makes one boneheaded comment and thenâ€¦.. down an elevator shaft!
Syndication Edit-The opening with everyone watching Joey on TV was longer as was Joey getting the script
Final Thoughts-Well we all knew Joeyâ€™s luck was going to run out, and it sure does here. Eddie also starts to reveal his true colors, as he and Chandler have a fight over something which only happened in Eddieâ€™s imagination. I am always amazed at how active Moncaâ€™s apartment was at this point in the series, and the scene where Monica and Rachel argue over the last condom is fantastic. Too bad the girls donâ€™t believe in other birth control, or the guys in providing their own stuff. There is also discussion among the couples on past romances which is pretty good too.
Grade=B+, Phoebe gets the short straw this time and the pacing sucks
Season 2, Episode 19
The One Where Eddie Wonâ€™t Go
Â

Plot Summary-Chandler tries to get rid of Eddie, Joey ends up in debt after losinghis job, and the girls read a new book about female empowerment
Funniest Line-â€œActually it’s the movie theater that has the time schedule. So you don’t miss the beginning.â€â€¦Ross
Nitpickof the episode-Good thing Chandler didnâ€™t sign Eddie to a lease.
Standout Character-Chandler, his attempts to get rid of Eddie are hilarious
Syndication Edit-Monica trying on Joeyâ€™s hat, Chandler sleeping on Monicaâ€™s couch
Final Thoughts-First of all, the story with the girls is so dumb. Where in the world did this come from? They have a fight for no reason which barely lasts through a scene change. The stuff with Eddie was hilarious, and I think one of the best moments of the series is when Chandler finally gets rid of him and we see Joey back where he belongs. It is so nice to have Joey and Chandler back, of course it would only be for another few years but who would have guessed that at the time? Eddie was just starting to get scary when he finally left, thankfully he never returned! Ross doesnâ€™t really have anything to do in this one except comment on Joeyâ€™s situation,which kind of sucks.
Grade=B-, the girls have a dumb story and Ross has less, itâ€™s the Joey and Chandler episode
I will be back later this week to finish season 2!