Season 3, Episode 8
The One with the Giant Poking Device

Plot Summary-Joey tells Chandler he caught Janice kissing her ex. Phoebe refuses to go the dentist, and Monica bumps Ben in the head.

Funniest Line-â€œI got a science question. If the homo sapiens were in fact, HOMOsapiensâ€¦is that why theyâ€™re extinct?â€â€¦.Joey

Standout Character-Chandler, no question in this one you truly feel his pain

Syndication Edit-Rossâ€™s teasing of Monica in the end was longer, Monica trying to reason with Ben to not mention the banging incident

Final Thoughts-This episode realty feels like they took three separate stories and just mashed them up. First, Chandler is fantastic in this episode. That scenewhere he is playing darts while talking about how upset he is was really great. Matthew Perry is an underappreciated actor. The story about Ben hitting his head seems so removed I forgot it was even part of this episode. The ending with Ross teasing Monica is funny. Phoebeâ€™s story would only work with Phoebe, and the whole ugly naked guy thing is just a means to give the others something to do so Chandler and Janice can officially end their relationship. I like howJoey bounces around the stories here and does it very well. I am not upset to see Janice go, that had run its course and was no longer interesting, Glad she would come back a few more times though.

Season 3, Episode 9
The One with all the Football 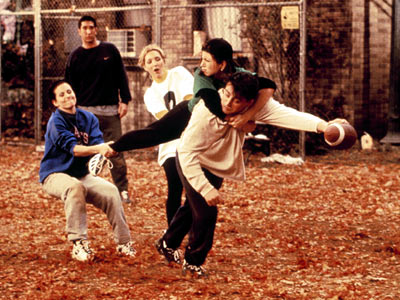 Plot Summary-Monica and Ross act competitive during a Thanksgiving football game.Chandler and Joey fight over a Dutch girl.
Funniest Line-â€œ Well, wait a minute though. How are we going to get there, because mymom won’t let me cross the street?â€â€¦.Chandler

Nitpickof the episode-Rachel comes off as to much of a wimp in this one, and how could she not know to run after catching the ball???

Standout Character-Monica and Ross; we know how competitive they can both be, itâ€™s about time we saw what happens when they are pitted against each other.

Syndication Edit-The ending is much different. We get the gang eating Thanksgiving dinner around the coffee table while Monica and Ross continue to argue about the ball outside, into the night. Then we see Ross and Monica agree to get rid of the Geller Cup down a trash chute, but it turns out Monica had Phoebe planted to secretly capture the trophy. Before Phoebe can get it, Ross appears.

Final Thoughts-This isnâ€™t the best Thanksgiving episode, but itâ€™s not the worst either. Itâ€™s always good when the gang is together just the six of them, and we get a real look inside Monica and Rossâ€™s childhood in this one. Since I donâ€™t have a category for Worst Character, I will just say that Rachel comes off as a huge wimp here which is a little much even for her. The other story involvesChandler and Joey competing for a Dutch girlâ€™s attention; itâ€™s not bad thoughit does take away from the main plot. Joey confusing the Netherlands for NeverNever Land was comic gold.

Season 3, Episode 10
The One Where Rachel Quits 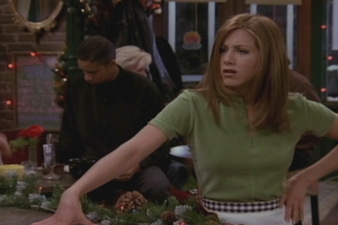 Funnies tLine-â€œSays here a Muppet got whacked on Sesame Street last night. Where exactly were you around tenish?â€â€¦.Chandler

Nitpickof the episode-It is never stated but I sure hope Ross is covering all the medical expenses for that little girl.

Standout Character-Rachel, the whole waitress thing had been really played out so it was about time. This would end up being the best thing for her character too.

Final Thoughts-This is why I love this series, other sitcoms would have left Rachel as a waitress until they had drained it dry. In this one the creators realized it was time for the character to evolve, and that meant she couldnâ€™t keep that same job. Â Thank goodness it really was getting dull. The way it is handled in this episode is just very well done.Phoebe and Joeyâ€™s story is ok I guess but for a Christmas episode it could have been stronger. Rossâ€™s story isâ€¦.I donâ€™t know, is either really funny or incredibly stupid. They do get some good gags in but the idea Ross broke this little girls leg is hard to buy. Yeah he feels horrible and makes every effort to make it up to her, but something about it just seemsâ€¦.not funny.

Grade=C-,Rossâ€™s story isnâ€™t funny since it involves a child he literally injured.

Season 3, Episode 11
The One Where Chandler Canâ€™t Remember Which Sister

Plot Summary-Ross is jealous when a nice guy offers Rachel a job for no reason. A drunken Chandler fools around with one of Joeyâ€™s sisters, but later is unable to remember which sister. Phoebe dates the loud guy upstairs.

Nitpickof the episode-The whole story about that noisy neighbor upstairs is lame! Isnâ€™t that what Heckles complained about all the time? It may have been ok if WE COULDÂ  UNDERSTAND WHAT THE GUY WAS SAYING!!!!

Standout Character-Chandler, itâ€™s his own fault but you gotta feel for the guy

Syndication Edit-Chandlerâ€™s lines are cut from the tag; Rachel at work

Final Thoughts-In this episode we are introduced to Mark, and we know where this is going. True it will take another few episodes, but we know. The truth is Ithink the series benefits from Ross and Rachel separating, but we have time to talk about that. Rossâ€™s jealousy makes sense but as we shall see this is just the beginning of that. The story about the loud neighbor upstairs is awful! Words canâ€™t begin to describe how pointless it is. And it takes Phoebe out ofthe majority of the episode. On the other hand, Chandlerâ€™s story is great and leads to some really good moments. True it does get a little silly toward theend, itâ€™s hard to believe Mary Angela went the whole dinner without talking to Chandler once, but overall it works.

Season 3, Episode 12
The One with all the Jealousy 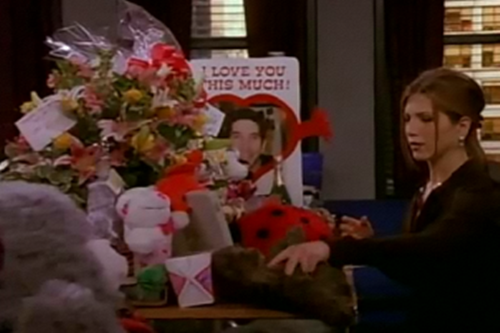 Plot Summary-Ross is jealous of Rachelâ€™s new co-worker. Monica dates a busboy from her diner. Joey pays for lying on his rÃ©sumÃ©.

Funniest Line-â€œIt was like you were marking your territory. You might as well have come in and peed all around my desk.â€â€¦.Rachel

Nitpickof the episode-Ross really gets carried away; I mean who sends a barbershop quartet to an office like that? Itâ€™s also hard to believe Ross canâ€™t see the way Mark is becoming Rachelâ€™s friend first, this is explained very well by Chandler and Joey. The scene where Ross interrupts Mark and his girlfriend is atad contrived.

Standout Character-Joey, watching him squirm through this episode is a lot of fun.Thatâ€™s what happens when you lie on your rÃ©sumÃ©.

Syndication Edit-The first conversation between Julio and Monica was longer, Chandler asking Ross to come to the bachelor party with him, Ross and Chandler trying to explain A Tale of Two Cities to Joey

Final Thoughts-The bad news is that the Monica story and the Joey story are just filler. The good news is that they are funny filler with satisfying pay offs.The main drive in this story is Ross and his jealousy about Mark which is out of control. It is understandable, as it is explains here and later on Ross wasso traumatized by what Carol did to him he has huge trust issues. They would come back later when he is with Emily. Iâ€™m on Rachelâ€™s side here, but not necessarily in the next few episodes. But weâ€™ll get to that.

Grade=B-,Better than it could have been

Season 3, Episode 13
The One Where Monica and Richard are Friends

Funniest Line-â€œWell, she spent the last six months getting over him, and now she’s celebrating that by going on a date with him.â€â€¦.Chandler

Standout Character-Monica, you could criticize her actions here but the truth is that a backslide is perfectly normal and the episode handles it pretty well

Syndication Edit-So often on this series they cut out the wrong part of a joke. There is a scene in the syndicated episode where Rachel ruins that Beth dies in Little Women, and then the scene cuts. When we get the tag we see Joey all upset because Beth isnâ€™t doing so well. This makes more sense when we see the unedited episode, where Rachel is convinced by Chandler and Ross to take back what she said about Beth dying because Joey was so upset about it. Why didnâ€™t they cut the tag instead? The scene also ends with Rachel seeing Phoebeâ€™sboyfriendâ€™sâ€¦.well, you knowâ€¦and just leaves a small hole in the syndicated episode.

Final Thoughts-Ross & Rachel are quiet in this episode as we focus on Monica and Richard. The backslide makes perfect sense but in the end they are left exactly where they were so a part of wants to call this a waste of time. Thankfully Tom Selleck is so great that itâ€™s worth it to get him back for one more episode.The gag with Phoebeâ€™s boyfriend is done pretty well, and itâ€™s Gunther who gets the big laugh at the end. My rule is only the main six get the â€œFunniest Lineâ€,but really in this episode Gunther steals it. As for Joey and Rachelâ€™s story, well, I guess they had to give Rachel something to do in this episode.

Grade=C+,Phoebeâ€™s story is the only good one and really itâ€™s a one joke story. Richard & Monica feel like a re-run. I can respect that from a human perspectivebut form a story perspective I have to criticize it. Especially after spendingso much time with Monica getting over him.

Thatâ€™s it for this week, come back next week as we conclude season 3 and look at the saddest episode ever