Plot Summary-Ross and Rachel deal with the consequences of their drunken night,Monica and Chandler decide to slow down and try living together, Phoebe and Joey drive back to New York
Funniest Line-â€œThis is not a marriage. This is the world’s worst hangover!â€â€¦..Rachel
Nitpick of the episode-A lot of people point to the fact that Ross and Rachel have the ink mysteriously disappear from their faces. However, the truth is the creators had worked to explain it. The ink had faded enough for make-up to cover it.There was a Chandler line where he was supposed to say that Ross got married and became a woman in the same night. They dropped the line but the fact it was considered means I will give them a pass on that one.
Standout Character-Chandler, I love that he is the one who asks Monica to move inwith him
SyndicationEdit-The opening scene with Ross and Rachel was longer
Final Thoughts-Thank the lord the creators wised up! I accepted the fake proposal back in â€œThe One with the Girl who Hits Joeyâ€ but having them rushing to the altar in the season final was too much. Good to see them realize that, and the decision to move in together makes perfect sense. Itâ€™s especially cool because itâ€™s Chandler who comes up with it. Ross and Rachelâ€™s story continues, not sure what Ross is thinking not quickly ending the marriage but I guess I wouldnâ€™t want three failed marriages on my record either. The only weak part of the episode is the Phoebe/Joey stuff which is boring. It takes hours and hours to travel from Las Vegas to New York non-stop, how much did Joey sleep? I also was amused how they took Joeyâ€™s movie, which was a big deal in the previous two episodes, and just swept it under the rug.
Grade=B
Season 6, Episode 2
The One Where Ross Hugs Rachel
Â

Plot Summary-Monica and Chandler try to break their new living arrangement to Joey and Rachel, Phoebe is convinced Ross is still in love with Rachel.
Funniest Line-â€œI’ll be at the bottom of the dating barrel now. The only guys below me will be four-divorce guy and murderer guy and geologists.â€â€¦.Ross
Nitpickof the episode-I was always torn about why Rachel had to move out. I mean later on the spare room becomes a guest room which Phoebe lives in for a while.Whatâ€™s the difference? I can see how Monica and Chandler would want privacy too. I guess it does create a new situation which never hurts.
Standout Character-Phoebe, her insistence that Ross loves Rachel is adorable
Syndication Edit-Scene extensions, scene with Joey and Chandler diving their stuff
Final Thoughts-I always really liked this episode. Ross loves Rachel? Imagine! I like the coffee shop scene where Ross discusses his marriages with the three strange girls. Very well cast guest stars, I really wanted to learn more about them! They give the news about Chandler and Monica a lot of weight which was great! Joey getting sad makes perfect sense, even though Chandler will just be across the hall itâ€™s not the same. They kind of glossed over the Joey/Chandler stuffbut they make up for it later. And Rachelâ€™s reaction is perfect, first her confusion and later her doubt. It isnâ€™t until Monica explained that the changeis really going to happen that Rachel believes it. However, the best scene ofthe episode is the tag where Phoebe and Joey discuss getting together; it was an inevitable conversation and handled perfectly!
Grade=A-,very well written and performed
Season 6, Episode 3
The One with Rossâ€™s Denial
Â

Plot Summary-Monica and Chandler argue about what to do with the spare room, Ross is in denial about loving Rachel, Joey interviews new roommates
Funniest Line-â€œ That’s fine! I won’t bring over the chairs. I won’t bring anything over!I wouldn’t want to ruin the ambiance over here at Grandma’s place!â€â€¦..Chandler
Nitpick of the episode-Well it didnâ€™t take long. Monica is so anal you knew she was going to have a problem with Chandler rearranging things. Um, how does she expect to move in with someone without them bringing some furniture over? Totally on Chandlerâ€™s side here.
Standout Character-Joey, because heâ€™s the only one not crazy in this one
.
SyndicationEdit-Phoebe and Rachel looking in the paper for apartments, Gunther talking to Rachel
Final Thoughts-This is a filler episode really, because nothing happens. The fight Chandler and Monica have is silly though perfectly in character for Monica. Iâ€™m not sure what Ross is trying to accomplish in this one really, if he is trying to deny his feelings for Rachel doesnâ€™t living with her compromise that? Joeyis funny here and thatâ€™s good enough for me. Oh, and we get the idiotic and contrived Denise crap where Phoebe claims to have a roommate no one has ever heard of, which is so dumb! Where did that come from? I suppose it was just an excuse Phoebe madeup to avoid living with Rachel, but it would have been nice if that was established at some point!
Grade=B-
Season 6, Episode 4
The One Where Joey Loses His Insurance
Â Plot Summary-Ross is asked to give a lecture at NYU, Phoebe is informed she only hasa week to live, Joey loses his insurance
FunniestLine-â€œOh, I can’t believe this! This sucks! When I had insurance, I could gethit by a bus or catch on fire, you know? And it wouldn’t matter. Now I gotta becareful?â€â€¦.Joey
Nitpick of the episode-Yeah Ross when your friends told you to phase the accent out Ithink they meant over weeks not in the same lecture!
Standout Character-Rachel, for that scene when she gets the news she is still legally married. Funny!
SyndicationEdit-Monica and Rachel fighting over the candlesticks
Final Thoughts-This episode is a bit better than the last. I guess the museum was getting boring because suddenly Ross has a new job. Why Ross started using an English accent is beyond me but itâ€™s funny. Phoebeâ€™s story is so pointless Iâ€™m not even going to say anything else about it. Joey once again steals the showwith his hernia bit, how do you make severe pain funny? Well he does. The best thing in the episode is that this is when Rachel finds out she is still marriedto Ross. They slip it in at the end which is really clever; the subject hadhardly come up in the whole show! Nice to see the writing not be predictableonce in a while.
Grade=B-
Season 6, Episode 5
The One with Joeyâ€™s Porsche
Â 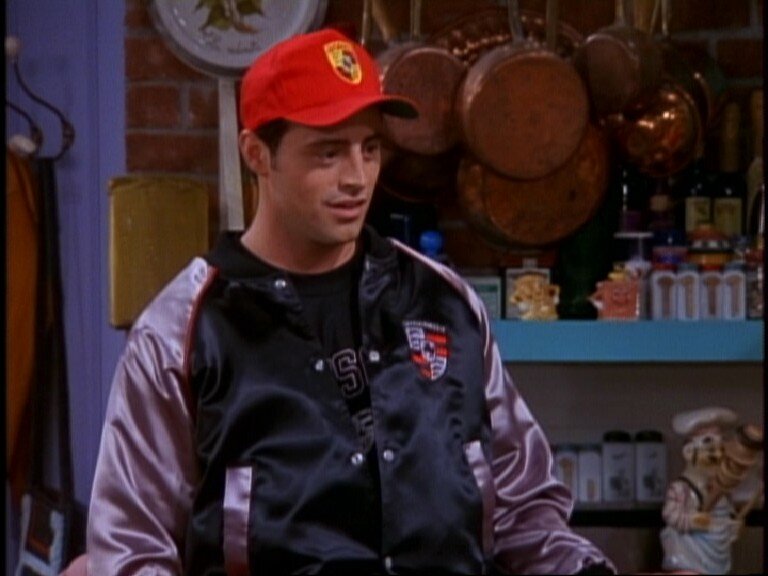 Plot Summary-Joey pretends to own a Porsche, Phoebe babysits the twins with Monica and Chandler, Ross and Rachel deal with their situation
Funniest Line-â€œRoss, just for my own peace of mind you’re not married to any more of us,are you?â€â€¦Chandler
Nitpickof the episode-Ross gets what he deserves here to be honest. Rachel has every right to be enraged.
Standout Character-Rachel, her anger is believable and the fact she is the one who suggested the marriage idea was a nice touch.
SyndicationEdit-Longer teaser (Joey tries to defend Ross but comes up empty)
Final Thoughts-The teaser picked up right where the last episode left off and is veryfunny! I get the feeling the creators were starting to realize how popular Joey was. His story here is a Joey story I can buy, as he tries to impress women with a Porsche he doesnâ€™t own. We finally get a conclusion to the mini-arc of Ross and Rachelâ€™s marriage. Rachel is really funny especially in the scene where Ross mentions the â€œwe were on a breakâ€ thing again. Rachel ends up moving in with Phoebe so the Denise thing was just a lame attempt to hold that off. Why didnâ€™t they just have her move in with Joey? It took them to long to realize that makes the most sense. Anyway, the last scene with Ross and Rachelis sweet and you can tell there is still something there between them. The stuff with Phoebe, Monica, and Chandler is cute too and I have no major problemwith it.
Grade=B+
Season 6, Episode 6
The One on The Last Night
Â

Plot Summary-Monica and Chandler prepare for their last night with Rachel and Joey, Ross tries to get out of helping to pack
Funniest Line-â€œ Hurry! Monica’s going to make you pack! She’s got jobs for everyone! Now it’s too late for me, but save yourselves!â€â€¦.Phoebe (fantastic moment)
Nitpick of the episode-David Schwimmer is directing which is why Ross is so absent from the episode. Well, ok I can accept that but couldnâ€™t they have found a less idiotic way to get him out? It doesnâ€™t even make sense why would he rather watch TV than help his friends pack?
Standout Character-Monica, Rachel, and Phoebe who are near perfect in this one and we even get good character development
SyndicationEdit-Ross mentions a big basketball game on TV that does help explain thenitpick I just made (a little)
Final Thoughts-This is a very important episode because itâ€™s here that many of the basic dynamics of the show are changing. A lot of times doing this will kill asitcom, imagine if one episode of Seinfeld had Jerry start visiting Georgeâ€™s apartment every episode? Wouldnâ€™t be quite the same. But the change works and the episode works as we really believe everything we see. Ok, Joey being fooled by the card game was a stretch. But the fight the girls have is great as the things they say arenâ€™t wrong. And the way Phoebe tricks them into being happy again was nice, leading to the final scene where Rachel leaves her home of five years for good. This episode is funny when it should be and sad when it should be.Good directing by David Schwimmer I just wish they hadnâ€™t had to shortchange the character.
Grade=A-,lack of Ross hurt this otherwise solid episode
Be back for more later this week!
Share on Social Media
twitterfacebooktumblrredditemail
Follow us on Social Media
twitterfacebookyoutubetiktok