Season 6, Part 2
Season 6, Episode 7
The One Where Phoebe Runs
Â Plot Summary-Rachel is embaeassed by the way Phoebe runs, Joey gets a sexy new roommate, Chandler tries to clean the apartment for Monica
FunniestLine-â€œLook, Chandler, Monica is really weird about this kind of stuff. Believeme, IÂ  lived with her for sixteen years. She is going to freak out. Oh my God,she’s going to sit on you.â€â€¦.Ross
Nitpickof the episode- I always love when Monica tells Chandler she would never expect him to follow her neurotic ways. Funny considering she did expect Rachel and Phoebe to follow them when they lived with her. And how in the world did Chandler not know Monica would freak if her apartment was not exactly the way she had it?? Itâ€™s so crazy Ross even brings it up in the episode.
Standout Character- Joey, funny to watch him try to not attract Janine
Syndication Edit-The discussion about how Chandler and Ross repel women was longer
Final Thoughts-Phoebeâ€™s story is delightfully pointless. Not much else to say about that one. We get introduced to Janine who did not do anything for the show really. Though the discussion Joey, Chandler, and Ross have about her is kind of funny. Chandler acts like he just met Monica in this episode, but it works in the end.
Grade=B-,could have been worst
Season 6, Episode 8
The One with Rossâ€™s Teeth
Â 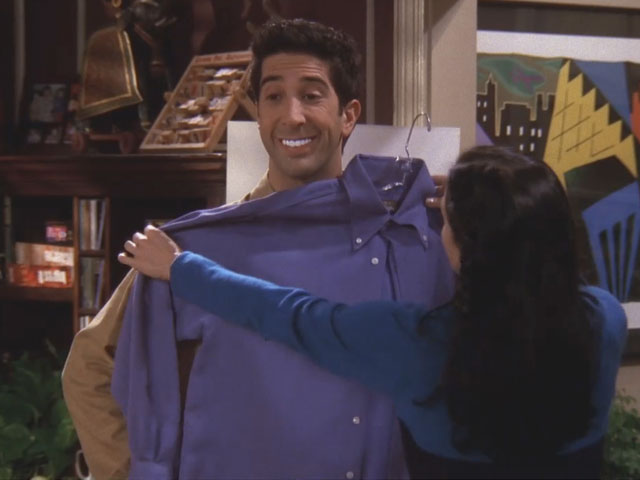 Plot Summary-Ross makes his teeth insanely white, Chandler tries to convince Joey that Janine is taking over, Phoebe thinks she made out with Ralph Lauren
Funniest Line-â€œItâ€™s not what you said, it’s just the way you said it. Oh, my God! I’m awoman!â€â€¦.Joey
Nitpickof the episode- Itâ€™s a strange episode when Chandler comes off as the normal one
Standout Character-Chandler, steals the episode with his reactions to Joey and Ross
Syndication Edit-More of Monica helping Ross with his teeth
Final Thoughts-The Ross story is really a one joke story which gets kind of old. For some reason Ross becomes the go to person for embarrassing things like the leather pants the last season and the tanning booth later on. Itâ€™s funny atf irst but gets old, in fact itâ€™s darn contrived I mean who had a blacklight poster in 1999? Chandlerâ€™s story is funny because Chandler makes it funny with his reactions and comments. The Rachel and Phoebe story is kind of weak; itfeels like they had to force the story to make it through the episode by having Rachel lie to her boss and a pointless Ralph Lauren cameo.
Grade=C+
Season 6, Episode 9
The One Where Ross Got High
Â

Plot Summary-Chandler discovers that the Gellerâ€™s do not like him, Joey and Ross want to go to Janineâ€™s party, Phoebe is attracted to Mr.Geller, and Rachel makes dessert
FunniestLine-â€œI don’t know. You know to me he’ll always be Jack Geller, walks in while you’re changing.â€â€¦.Rachel
Nitpickof the episode-Hate to pick on Ross again but why he is he so afraid to tell his parents his smoked pot college? Heâ€™s an adult itâ€™s not as if he can get punished by them. This happens on Everybody Loves Raymond all the time but it’s even worst there, at Ross isn’t terrified of his folks!
Standout Character-Everyone, couldnâ€™t pick just one person this is one of those episodes where everyone is equally great
Syndication Edit-The original teaser, a scene at the coffee house where we establish Rachelis making desert this year. Another extra scene is at the end of the show where Janine comes to Monica and Chandler’s place and Monica introduces her to her mom and dad. Yeah, episode went long.
Final Thoughts-My favorite Friends Thanksgiving episode.Â  Everyone has something to do; the stories are funny and move along swiftly. Rachel putting meat in the Trifle? Only she could do that and not realize it. Ross and Monica turn into little kids around their parents as they shout each otherâ€™s secrets. I love Judy when she takes control after processing all the information thrown at her, she really feels like a strong mother in that scene. Yeah Phoebeâ€™s story is pointless but it is nice that they gave her some kind of storyline rather than just having her just be there. Joey even gets the funniest moment when he actually enjoys Rachelâ€™sweird beef concoction. This episode is like Thanksgiving dinner, very satisfying. If you think I have been easy on these, wait till we get to next seasonâ€™s.
Grade=A,best episode of the season so far
Season 6, Episode 10
The One with the Routine
Â 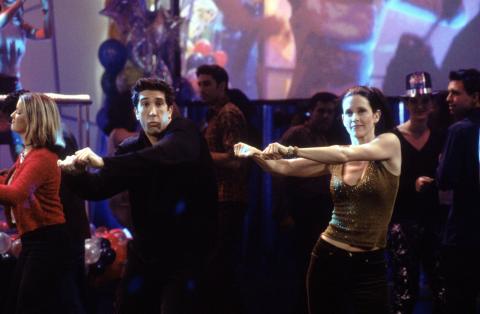 Plot Summary-Ross and Monica are excited to appear on New Yearâ€™s Rocking Eve, Joey hopes to kiss Janine, Chandler tries to stop Phoebe and Rachel from finding their Christmas gifts early
Funniest Line-â€œ Well the duck seems to think that Monica got me garbage. Hmm, I wonderwhat can I get Monica that’s as good as garbage.â€â€¦..Chandler
Nitpick of the episode-I think what Phoebe and Rachel do in this episode is horrible, why would you want to spoil the surprise of opening your presents? But thatâ€™s just me
Standout Character-Oh okâ€¦.Monica and Ross. Yeah they are goofy but itâ€™s nice to see them acting like brother and sister
Syndication Edit- Extra scene where Rachel, Phoebe and Chandler look for Monica’s presents at Central Perk. Another one when Ross and Monica didn’t hear the director say cut and kept dancing.
Final Thoughts-Give the episode credit, Ross and Monica are really goofy here but it works. TV Guide was really hard on this episode when it first came out, it isnâ€™t so bad. True they misrepresent how the New Yearâ€™s Rocking Eve special works, but so what? While I was not a fan of Janine I was kind of hoping Joey would end up kissing her, but because this is Friends in the next episode I am sure she will transform into a shrill witch and the relationship will die quickly. Hmm, maybe thatâ€™s why the Chandler and Monica thing stuck; they couldnâ€™t change either of their personalities so we would hate them and be happy they were gone in the next episode. Food for thought. Anyway I am rambling and since I already expressed my feeling about the Phoebe/Rachel story,letâ€™s move on.
Grade=C+
Season 6, Episode 11
The One with the Apothecary Table
Â

Plot Summary-Rachel orders furniture from Pottery Barn which Phoebe hates, Joey hasa problem when Janine hates hanging with Monica and Chandler.
FunniestLine-â€œNo no no, but I am mad! I am mad! Because this stuff is everything that is wrong with the world! And it’s all sitting up in my living room and all I can think about is how I don’t have that lamp!â€â€¦.Phoebe
Nitpick of the episode-It was incredibly stupid to have this episode continue right where the last left off. The last one was Christmas, and in this episode the decorations are all gone. All they had to do was establish that some time had passed.
Standout Character-Joey; you know he isnâ€™t going to choose anyone over his friends because his friends mean everything to him. Nice to see that played out.
SyndicationEdit-Scene Extensions
Final Thoughts-Well what do you know, Janine is a witch who canâ€™t stand Monica and Chandler. Did she just meet them? Ok to be fair I didnâ€™t care for Janine so no loss that sheâ€™s gone. I do like how Monica stands up for herself even though Janine is like two inches taller. The story for the other three feel like filler, as usual in Friends the easiest way to make conflict is to have Phoebe inexplicably hate something. A couple seasons ago it was Christmas trees, last season it was PBS, and today itâ€™s Pottery Barn. The story is full of fluff andin the end Phoebe proves she is not as ethical as she claims when she makes upa lie which allows her to buy a lamp from there. By the way, was this episode a commercial for Pottery Barn?
Grade=C+
Season 6, Episode 12
The One with the Joke
Â

Plot Summary-Chandler and Ross argue over who came up with a joke, An argument breaks out between the girls while Joey starts working at Central Perk.
FunniestLine-â€œThe joke is not funny, and itâ€™s offensive to women. And Doctors, and Monkeys. You two shouldnâ€™t be arguing over who gets credit you should be arguing over who gets blamed for inflicting this horrible joke upon the world. Now let it goâ€¦The joke sucks!â€â€¦.Monica
Nitpickof the episode-I have one thing to say about the whole joke story. WHO CARES???
Standout Character-Monica, only she would get upset because Phoebe picked Rachel in a hypothetical scenario.
Syndication Edit-Longer teaser, Joey interrupts Monica and Chandler by watching their TVafter he has finished his â€œbookâ€
Final Thoughts-If you read the plot summary you can probably guess how I feel about the girls story. It was soâ€¦.pointless. They just get into an argument for no good reason. I do like that one scene where Rachel insists she is not a pushover and Monica insists she is not bossy, and then Monica shoots down Rachelâ€™s lunch idea to no fight at all from her. That was a nice glimpse at how those two characters work. The Ross and Chandler story has no real substance either, arguing over a silly joke? And we never do get a final answer. Joey decides to work at the coffee house and it is nice to see a call back to whenRachel worked there. That feels like it was so long ago the character has evolved so much past that. There is another great scene with Chandler and Monica in bed sort of comparing notes. When you watch that scene you can seehow much they are meant to be together.
Grade=B-,strong moments lift a bland episode
Yeah Season 6 was not as strong as Season 5, but would the second half get worst or improve? Come back next week to find out!
Share on Social Media
twitterfacebookemail
Follow us on Social Media
twitterfacebookyoutubetiktok 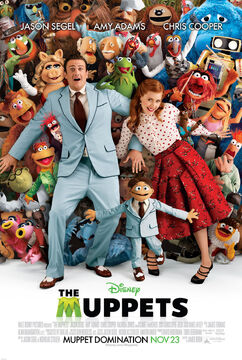