Plot Summary-Chandler hires a main which upsets Monica, Phoebe hooks up with Eric, Rachel decides to move out of Joeyâ€™s place
Funniest Line-â€œ Yeah. I can’t live with Joey once the baby comes. I don’t want my child’s first words to be, “How you doin’?”â€¦..Rachel
Nitpick of the episode- Chandler hires a maid. Let me repeat that. Chandler, who is married to an anal retentive clean freak who is always cleaning and needs everything to be just so, hires a freaking maid!!!Â  Who thought this up?????
Standout Character-Joey, you can tell he honestly enjoys living with Rachel
Syndication Edit-The maid wondering why Monica put her head between her legs (no, Iâ€™m not kidding)
Final Thoughts-I really donâ€™t know what they were going for with the maid story. I already pointed out how dumb that is, and then they take it a step further by making Monica paranoid about the girl. I like when Chandler asks if itâ€™s possible the company that made the jeans the maid is wearing could have possibly made more than the one pair. The only good part of that is the end when Rachel clears everything up. I liked the Joey/Rachel story, you wouldfigure that Joey would not want to live with a baby but he loves living with Rachel so much heâ€™s willing to take it onâ€¦nice. Pointless as we will see later, but nice. And Ross waiting out the death of a tenant so he can lay claim to her apartment is awful. Finally, we have Phoebe who quickly breaks up with Eric.Really why did she try seconds after he just broke up with Ursula? Lots of stupid here.
Grade=C+
Season 8, Episode 8
The One with the Stripper
Â

Plot Summary-Monica tries to make up the fact that Chandler never had a bachelor party;Rachel tries to tell her father that she is pregnant
Funniest Line-â€œ That’s it?! You call that a fight? Come on! “We were on abreak!” “No we weren’t!” What happened to you two?!â€â€¦..Phoebe
Nitpick of the episode-Why didnâ€™t we ever see Rachel tell her mother that she waspregnant?
Standout Character-Joey and Chandler; itâ€™s always great to get those two together
Syndication Edit-Mona and Ross talking at the coffee shop
Final Thoughts-This is a great episode, very funny and very strong. After meeting Rachelâ€™s dad already we can understand why Rachel is afraid to tell him she is pregnant. And it goes as well as youâ€™d expect, and when Dr.Green goes over toy ell at Ross we get a very good scene. Ross does a great job of explaining himself to Dr.Geen while also keeping Mona from freaking out. Then Rachel smooths things over in one of her better moments. However my favorite part ofthe episode is the Chandler/Joey stuff which has been so missing ever since Chandler moved in with Monica. The whole subject is handled very well and itâ€™s just great to see the two together again. Phoebe doesnâ€™t really have much to do here but she does get in some great lines.
Grade=B+
Season 8, Episode 9
The One with the Rumor 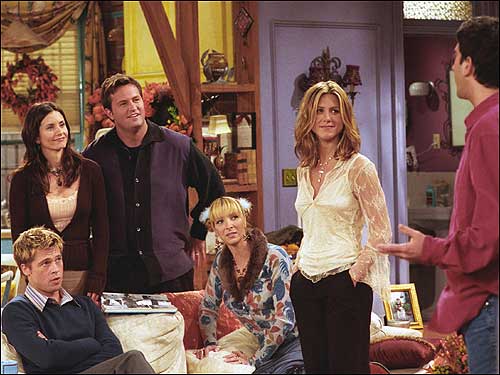 Plot Summary-Monica invites an old friend to Thanksgiving who hates Rachel; Joey tries to finish an entire turkey by himself.
Funniest Line-â€œEverybody at my high school heard that! You were the hermaphrodite cheerleader from Long Island?!â€â€¦..Chandler
Nitpick of the episode-Man does Joey get shafted here. First, the story goes nowhere.Second, toward the middle of the second act he leaves to change his pants. He finally comes back wearing Phoebeâ€™s maternity pantsâ€¦.at the end of the act! He is totally absent for most of the second act and misses out on everythingâ€¦.all for a horrible joke at the end!
Standout Character-Rachel; apparently she really was a bitch in high school
Syndication Edit-Monica realizes Chandler and Phoebe lied about liking football
Final Thoughts- This episode is not terrible but also not that good.Brad Pitt guest stars and he is good enough, but the whole episode is basically one storyline about Rachel and the rumor that was started about her. There are some good laughs but hereâ€™s the thing. It would have been fine as part of an episode, but the whole episode? It just feels empty as far as Friends episodes go, as if they had this one gag and just beat it to death. Not only is the rumor not funny, but it doesnâ€™t really tie in to what we already know about Rachel during that time. Besides who cares about Ross and Rachel in high school? The worst thing is that Joey is really underused as I already mentioned.
Grade=B-,meh though better than the previous season’s dog episode
Season 8, Episode 10
The One with Monicaâ€™s Boots
Â

Plot Summary-Monica regrets buying a pair of expensive boots, Phoebe learns that Rossâ€™s son is classmates with Stingâ€™s son; Joeyâ€™s sister has a surprise for her brother
Funniest Line–â€œSo I was right. This is what it feels like to be right. It’s oddly unsettlingâ€â€¦.Chandler
Nitpick of the episode-Apparently Monica has never heard of trying boots on before buying. And why does she have to wear them so much? Just throw them in the closet and Chandler would probably forget about them.
Standout Character-Phoebe; itâ€™s so much fun watching her be a celebrity stalker
Syndication Edit-One of my favorite bad edits happens here! The scene is that Ross comesi nto the coffee house to announce he picked up Ben, but Ben is not with him.Chandler spins around looking for Ben to point out that Ross didnâ€™t do such a great job (one of his funnier lines). Ross says Ben is at Carolâ€™s and the scene continues with Ross talking to Phoebe. In the re-run, Ross comes in and it goes right to him talking to Phoebe. However, you can still see Chandler start to spin around. But then he disappears and the cut makes it look like he was doing a dance or something in the background for no reason!
Final Thoughts-I wonder if the whole story about Joeyâ€™s sister being pregnant was really a way to show that Rachel is much more together than she was at thestart of the series. It really doesnâ€™t serve any other purpose I can think of.Monicaâ€™s story gets old fast, and while Phoebeâ€™s story is kind of funny it also serves no purpose. Yeah it has some funny moments but overall this episode isjust average. By the way, Ross hardly has anything to do in this one.
Grade=C+
Season 8, Episode 11
The One with Rossâ€™s Step Forward
Â

Plot Summary-Ross panics when Mona suggests sending out a holiday card, Chandler spends time with his newly divorced boss, Rachel experiences hormones
Funniest Line-â€œNot just a key, I gave her the only key! I am now a homeless person in a very serious relationship.â€â€¦.Ross
Nitpick of the episode-What was the point of having Ross go out with Mona? Except to keep him away from Rachel. With everything going on I am amazed Mona lasted as long as she did! Â And who sends outholiday card when they have only been dating a short while?
Standout Character-Ross; while we get the spastic Ross here at least he has an actual story
Syndication Edit-Scene Extensions
Final Thoughts-For some reason episodes done before Christmas break are always bad. This is another forgettable episode, possibly because it involves characters we donâ€™t care about. We donâ€™t care that Chandlerâ€™s boss is going through adivorce. We donâ€™t care that Ross thinks his relationship is going too fast, Mona hasnâ€™t been around long enough. Rachelâ€™s dilemma is kind of amusing butthe Rachel/joey stuff in the end just feels forced in this episode, and itâ€™sforgotten in the next one.
Grade=C-
Season 8, Episode 12
The One Where Joey Dates Rachel
Â Plot Summary-Joey takes Rachel on a date to cheer her up, Phoebe gets Monica and Chandler a Pac Man arcade game as a wedding gift, and Ross gets a new teaching assignment which is rather far away.
Funniest Line-â€œI got good. I played this game all day and now I rule. They should change the name to Ms. Chandler. Although, I hope they don’t.â€â€¦.Chandler
Nitpick of the episode-Was somebody having an 80â€™s flashback when they came up with that Pac Man story? It makes Seinfeldâ€™s Frogger episode look brilliant incomparison, at least there it made sense.
Standout Character-Joey, for being such a great friend in this one. As for falling for Rachelâ€¦.wellâ€¦.
Syndication Edit-Ross getting ready to run to his next class
Final Thoughts-I have to give the writing credit here. Rossâ€™s story is so stupid, and yet itâ€™s really funny. The Pac Man story is just stupid, and the scene where Ben walks in on Phoebe swearing like a sailor isnâ€™t funny though I guess I give the episode points for trying. Joey and Rachelâ€™s mock date works and makes for some great moments. As for the Rachel/Joey stuff and that scene in the end..â€¦I suppose you want me to talk about that donâ€™t you? Wait, itâ€™s the end of the article! I can hold it off another week! YES!!!!Â Â  (aren’t I horrible?)
Grade=B-
Next week we continue Season 8 and I promise I will discussthe elephant in the room
Share on Social Media
twitterfacebooktumblrredditemail
Follow us on Social Media
twitterfacebookyoutubetiktok