Jul 25, 2014
Starting what I hope will be a new series talking about the great (and not so great) specials from the 80’s and 90’s. We just don’t get these anymore, not counting that awful Betty White’s 2nd Annual 90th Birthday Special. I adore Betty White but That was seven kinds of stupid.
Today I want to talk about a special which has become almost infamous. It aired on Earth Day in 1990 and was simply claled “The Earth Day Special”. I loved this as a kid because of the all star cast. As an adult I find it more and more…silly.

My brother and I videotaped this and I still have it to this day. I have seen it several time and it gets weirder every time. I will say one thing, it sure does have an all star cast. I’d be here all day if I listed everyone who appears in it. Basically the special is a series of cutaways and cameos. They do try to hammer in a narrative, but it gets so lost toward the end you forget it.
Now before I say anything else, I am all for the environment, I believe we should reycle, I am against littering, and I would rather spend my time outside than stuck in a movie theatre any day. I love walks in the woods and enjoying nature. I also think there is validity to the whole Global Warming argument. I am not knockinbg the science or facts in this special, I am knocking the presentation which was…odd. 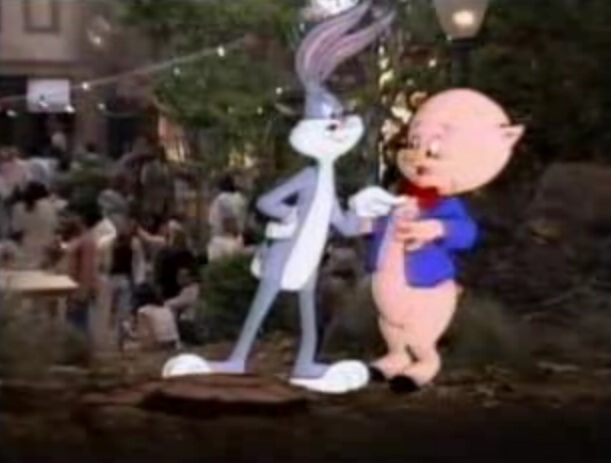 The special opens in a small town celebrating the 20th anniversary of Earth Day with a big parade. After the credits role, Bugs Bunny suddenly appears…..oh man, this ain’t got nowhere to go but down does it? By the way I should mention that this special was produced by Time Warner, and man does it show!Actually I went a bit to far, the real opening involves Danny DeVito and Rhea Perlman as an average couple watching the special. Rhea is all into it while Danny (or Vic as he is called here) just wants to go out with the guys. This is the only portion of the special with any sense of reality. So, after we hear from Bugs how people have ruined the planet (Insert Nostalgia Critic gag about the evil of MAN!! here), we meet our main character.

Robin Williams plays a man named Everyman (or something) and he is cracking jokes about how wonderful all this technology and industry we have is. Suddenly the stand up is broken up by Mother Nature (played by Bette Midler) who points out that all the industry he is so proud of is killing her! She then appears in the flesh and is rushed to the hospital because Mother Earth is dying. Ok, to be fair this is a good opening and isn’t as ham fisted as the rest of this will get. It gets your attention and really makes you want to know what is coming next.

Mother Earth is rushed to the hospital and we have lots of stats thrown at us. Of course all the info is bad. Now get this, this is how the story progresses : Harold Ramis plays the brother of Ghostbuster Egon Spengler who tracks down and interogates known pollutant, Martin Short’s Nathan Thurm. After that Candice Bergen appears as Murphy Brown reporting on the story, when Doc Brown arrives from the future in the Delorean. Yes, you read that right. The delorean and Doc Brown from Back to the Futuare are in this! And by the way Mother Earth is being treated by Doogie Howser. Doc Brown reveals that the answers to the problem is in reading newspapers he has gathered to get informed, newspapers that are bound together by E.T in a book format for everyone to share. Then the Muppets appear to talk about how the animals are worst off then the humans, before a scene with The Golden Girls commenting.

Are you starting to see why this is silly yet? I know it sounds like bad fanfic but I swear that was all true!The rest of the special is the town members reading from the book about how to help Mother Earth (recycling, using less water, and so on). Which means that the whole narrative establsihed in the first hour basically disappears for the second. It becomes speeches, PSA’s, and non sequiter cutaways. This special would have worked much better as an hour and a half. The end falls flat, but more on that in a bit.

What I liked:-Much of the information provided here is really good. It’s actually funny to watch this today and see how many problems are no longer as bad and how many solutions we have today that weren’t even considered back then. When was the last time you head about styrofoam containers or acid rain?
-The sitcom cameos. This special contains cutaways to the casts of The Golden Girls, The Cosby Show, Cheers, and Married..with Children in character watching the special. and as you may imagine I loved them! The characters are fully in character and it doesn’t seem as silly as other things in this. You really feel like you stumbled onto an episode of each show. Though with no laugh track many of the jokes fall flat, especially Sophia’s from The Golden Girls segment. Thank heavens for laugh tracks! This was by far one of the best things in this special.

-Every so often they cut back to Rhea Perlman and Danny DeVito, usually involving Vic grabbing the remote and changing the channel. He has a dream sequence with Dan Aykrod and Chevy Chase which is good. The best part is there last scene as Vic wonders what they will tell their grandkids should the worst possible outcome occur.

-Some of the performers were solid. Michael Keaton appears in a very strong moment. One of the kids who wants to help is Blossom, before she became Blossom, which is cool. Yes I know her name is Mayim Bialik. Yeah it was silly but Christopher Lloyd is just great in this. Many of the others feel phoned in (Candice Bergen for one who looks like she is just waiting for her check to clear) but he is really trying. There is another scene with Robin Williams and Dustin Hoffman that really works too. The Muppet scene is strong since animals really do suffer more and while I wish they had touched on that more, Kermit’s cameo at least address’s it.

-Of course this is so pro-environemnt you would think the answer would be to give up our clothes and live in tents. There has to be a way to keep the technology without hurting th environment, but of course in this special all technology and industry is EVIL!! And it’s all our fault. The funny thing is that global warming is not mentioned once, guess it hadn’t become a buzzword yet.

-To much! It was so hard to keep up with the stories with just so much going on. Sticking with the basic narrative would have been enough! In the middle there is a rap song for no reason, we get game show stuff with Jeapordy and The Dating Game (which includes Rodney Dangerfield and Geena Davis???) and even a Dennis Miller Weekend Update! Just to much.

-So many poitnless moments. It was funny to see Martin Short recreate Nathan Thurm, but it is so pointless. At one point we cut to a basketball game so Magic Johnson can have a discussion with Michael Douglas….for some reason. The scene is so fake, who talks like that in real life? Also there is a bit with Kevin Costner and Meryl Streep which has nothing to do with anything. We never see their characters before or after their scene, it was as if they had two of the biggest stars on the planet and had to do something with them! You can’t have a structured narrative and poitnless vignettes in the same show!

-WAAYYY to Campy. I love camp, I really do, but here it’s downright distracting. The town is an obvious set and the people are all clothed in bizarre colors. Nothing about this place seems real, which doesn’t work. If this is supposed to be about a real life problem than having an over the top campy town and characters like Doc Brown doesn’t help to take things seriously.

-The ending. I have always hated the way this ends. Everyman appears with Mother Earth who expresses pessimism that people wil change. Then things get dumb. After all the camp before it, Robin Williams and Bette Midler drop their characters and speak as themselves. So…now we’re supposed to take them seriously? You can’t give us a story and then at the end say “ah, screw the story here’s my speech!” The speech feels like a campaign speech! And then Robin Williams makes a joke about his wardrobe which I have always, always, found inappropriate. First of all, if you’re sending a serious message stay serious. And second, as I already said, HOW ARE WE SUPPOSED TO TAKE THINGS SERIOUSLY IF YOU DON’T!!! Thankfully Rhea Pearlman and Danny Devito have one last scene that is very strong (which I already mentioned). 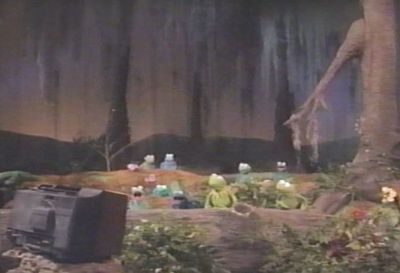 While there is a lot of important information in this, the special is bogged down by being to much. There is such a thing as overkill and it’s never good when you get so much information that it becomes overwhelming. If they had stuck with the basic narrative this could have have been a very strong show, but the cutaways and pointless cameos are just way to much. The story also isn’t strong enough to contain the whole special, being so strong and even entertaining in part one only to all but vanish in part two. I will says that this special is deffinately worth a watch, and there is a lot of good in it, but you may need a scorecard to keep up with everything.Â  I have watched this several times and by the time it gets to the Barbra Streisand song at the end, I have had enough! Also as I get older my environmental beliefs do not agree with many things here, but I ain’t getting into that discussion today! This special is on YouTube if you can’t find it anywhere else, and it really is worth checking out.