Season 9, Part 2
Season 9, Episode 7
The One with Rossâ€™s Inappropriate Song

Plot Summary-Ross sings a very questionable song to Emma, Joey and Chandler findÂ  a sex tape in Richardâ€™s apartment with Monicaâ€™s name on it, Phoebe meets Mikeâ€™s parents
Funniest Line-â€œAnd that’s why, no matter what mommy says, we really were on a break. Yes we were! Yes we were!â€â€¦.Ross, keeping that gag alive and well!
Nitpick of the episode-I thought it was a big mistake making mention of Richard, not only is it beating a dead horse but the episode really hurts the character by making him out to be a real loser. Isnâ€™t Chandler over Richard yet?
Standout Character-Ross, I donâ€™t know how the writers do it but once again whats should have been a stupid story is made really funny
Syndication Edit-Phoebe arriving at Mikeâ€™s parents
Final Thoughts-Amazingly enough, this episode works. Well parts of it work anyway. I usually love some good old fashioned Chandler and Joey hijinks but the Richard stuff is so two seasons ago. I just donâ€™t know what possessed the creators to revisit that well.Â  The stuff with Ross and Rachel singing rap songs to Emma is surprisingly funny. The main drive of this episode is Phoebe meeting Mikeâ€™s parents who are stuck up snobs. This story is very well done, and even includes the reveal that Mike loves Phoebe. I know I have said this, but it is so nice to see Phoebeâ€™s character finally evolve.
Grade=C+
Season 9, Episode 8
The One with Rachelâ€™s Other Sister
Â 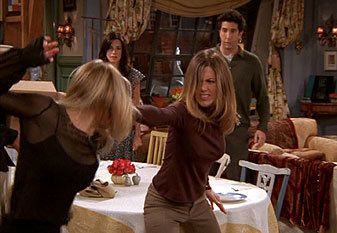 Plot Summary-Rachel invites her sister over to Monicaâ€™s for Thanksgiving, Chandler decides to use their good china, Joey misses a parade appearance and needs a goodlie.
Funniest Line-â€œEmma is the product of a bottle of Merlot and a five year old condom.â€â€¦..Monica
Nitpick of the episode-The stuff with the plates is just idiotic! First, why is Monica so against using them? Did she think china was meant to be a decoration? Second, her obsessive worrying during dinner is annoying. Third, during the catfight it is waayy to obvious that the plate on the table will end up being broken.Â  Also, the story about Joey missing being in the parade goes NOWHERE!!!!!
Standout Character-Chandler, Totally believe he is worried about being a father and the way he takes charge in the end is GREAT!
Syndication Edit-More with the plates (yeah, I knowâ€¦.), Amy hiding from Emma in the hallway,Joey gets a special plate, Monica crying over the broken plate (GOOD GOD,ENOUGH WITH THE PLATES!!!!)
Final Thoughts-This episode has more good than bad, and is an improvement over the last Thanksgiving episode. We finally meet Rachelâ€™s other sister and Amy is such a self-involved person! The way she unintentionally offends everyone is funny. The cat fight she has with Rachel is a well done scene, except the plate breaking is predictable as I said. The discussion between Chandler and Monica over Chandler being a good father is really nice. There is lots of bad here too including Joeyâ€™s story which is actually worse than the last Thanksgiving episode, Monicaâ€™s annoying plate obsession, and Phoebe has very little to do here. One more Thanksgiving episode left and spoiler alert-it will be the worst one! But we will get to that soon enough.
Grade=B-
Season 9, Episode 9
The One with Rachelâ€™s Phone Number
Â

Plot Summary-Rachel and Phoebe go out to a bar, Chandler tries to sneak home without Joey finding out, Ross and Mike try to hang out together but it fails miserably
Funniest Line- â€œI don’t know how to tell you this, but I think Monica’s cheatin’ on you.I told you shouldn’t have married someone so much hotter than you.â€â€¦.Joey
Nitpick of the episode- I always remember what I thought when I first saw the Ross and Mike stuff in this episode. Why didnâ€™t they put the TV on? There wasnâ€™t a ballgame or something on they could both watch? Actually this comes up; the excuse being that the cable is out. Uh, Rossâ€¦ever heard of VCRâ€™s!!!
Standout Character- Rachel, her mixed feelings about giving out her number is very telling
SyndicationEdit-The opening teaser with Chandler
Final Thoughts-This episode is chock full of character development! The wholeJoey/Chandler story is kind of silly. But I like in the end when Joey is annoyed that Chandler just assumed he was too stupid to understand that Chandler would rather see his wife. Sometimes the other characters are a little hard on Joey. We get more development in the whole Ross/Rachel stuff when Ross does not give Rachel a message. Mike does a great job fitting in to the group. The scene where Mike answers Rossâ€™s phone is laugh out loud funny!
Grade=B+
Season 9, Episode 10
The One with Christmas in Tulsa
Â Plot Summary-Chandler is stuck working in Tulsa at Christmas
Funniest Line-â€œMy wife is amazing, she’s beautiful and smart. If she was here right now, she’d kick your ass.â€â€¦.Chandler
Nitpick of the episode-Wow, Chandler calls home on Christmas Eve night and later when he flies homes itâ€™s still Christmas Eve night! That must have been one long night!
Standout Character-Chandler, I do like that he quits his job, something he was incapable of doing in Season 1.
SyndicationEdit-more clips
Final Thoughts-Nooooo! Tell me it isnâ€™t so! Another lousy clip show! Ok, deep breaths. As far as Christmas episodes go, this one isnâ€™t so bad. If you ignore the stupid clips anyway. But the clips suck, first of all there werenâ€™t really too many special Christmas moments on this show so that stuff seems weak. The second series of clips rehash how Monica and Chandler ended up together, which they already did a few seasons ago! Again, if you take the clips out this is astrong Christmas episode, and having Chandler quit his job was nice.
Grade=C
Season 9, Episode 11
The One Where Rachel Goes Back to Work
Â

Plot Summary-Rachel returns to work when she discovers someone is doing her job, Joey regrets getting Phoebe a job on his soap, Chandler and Monica deal with the fact Chandler is unemployed
Funniest Line-â€œWell because if one more person says “What a cute little boy”I’m gonna whip them with a car antenna.â€â€¦.Rachel
Nitpickof the episode-The joke about Emma being confused for a boy was lame
Standout Character-Phoebe, just classic Phoebe in this one
SyndicationEdit-Scene Extensions
Final Thoughts-Not sure what to say about this one, everything is pretty average.Yeah Phoebe is funny but the story is pointless really. Just gives Lisa Kudrow a chance to have some fun. The stuff with Rachel is good; we see how much her job means to her when it looks like Gavin is trying to steal it. I alway sthought their romance was forced but more on that later. Monica and Chandlerâ€¦are in the episode I guess. The conversation they have about having kids is nice but nothing new. One cool moment, we finally learn what Chandlerâ€™s job was!
Grade=C+
Season 9, Episode 12
The One with Phoebeâ€™s Rats
Â

Plot Summary-Phoebe is a care keeper for a box of rats, Rachel and Gavin get closer at Rachelâ€™s birthday party, Ross begs Joey to stay from the hot new nanny
Funniest Line-â€œYeah, obvious beauty’s the worst. You know, when it’s right there in your face. Me, I like to have to work to find someone attractive. Makes me feel like I earned it.â€â€¦..Ross
Nitpick of the episode-Donâ€™t even get me started on that horrible rat story!!!
Standout Character-Joey, his attempts to get to the nanny and reaction to the fact she is a lesbian are just great
Syndication Edit-Chandler having too much time on his hands
Final Thoughts-This episode is a rare curiosity. There is no other episode where I loathe one story, while absolutely loving another. The story I loathe, you may guess, is that awful rat story. I mean, WTF?? Pretty bad when Friends has to steal from NewsRadio. Was that supposed to be funny? Awful! I mean, I canâ€™t even find the words to describe how much I hate it! On the other hand, the stuff with Joey, Ross, and Chandler was really funny! Especially Chandlerâ€™s attempts to keep Joey away from the nanny. In the middle is the Rachel story,as we see her get closer to Gavin. This seems pointless, until that final scene where the two kissâ€¦and we discover Ross across the street watching them! This is setting up a big confrontation between the two, but that will have to wait another week.
Grade=B-,lucky itâ€™s not lower
Next week we will continue season 9, and find the creatorsstarting to run out of ideas