Plot Summary-Monica gives a revealing performance at a karaoke bar, Joey has problems getting his eyebrows waxed, and Ross and Rachel have it out over their living situation
Funniest Line-â€œThere is a thin line between love and hate, and it turns out that line is a scarfâ€â€¦.Rachel
Nitpickof the episode-I try so hard not to judge Ross and the way he uses that strange girl in this one. I try, but itâ€™s not easy. Why would you play games with someone who is so clearly damaged?
Standout Character-Ross, he is really incensed at the start of the episode and I can understand why. However he is also in the wrong later when the subject of the phone message he never gave Rachel comes up
Syndication Edit-Longer opening (by the way, the opening scene is fantastic!), more with the strange girl
Final Thoughts-The Monica story falls flat. It isnâ€™t funny when we have to be told what is happening. Granted Chandlerâ€™s reaction is pretty good. The Joey story is, well, weird. I have no idea what that was all about. Sight gags never hurt anyone I guess. Once again the real focus here is Ross and Rachel. In order to get through the episode Ross fails to flirt with girls. Then comes along the creepy girl Ross hooks up with for no reason. This is all to lead to the final conversation between him and Rachel where they realize that living together suddenly may not be such a good idea. Itâ€™s one of their most intense discussions in awhile. So Rachel ends up moving back with Joey, which really does make more sense. This is the final move of the series, thankfully. So what happened with Gavin anyway? He vanishes after this episode; apparently he was just here as a plot device.
Grade=B-
Season 9, Episode 14
The One with the Blind Dates
Â 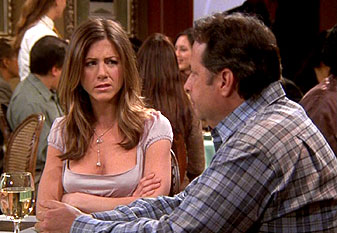 Plot Summary-Joey and Phoebe set Ross and Rachel up on bad blind dates to get them back together, Monica and Chandler babysit Emma which disrupts Monicaâ€™s plans when she is ovulating
Funniest Line-â€œYou better hope I’m pregnant, because one way or another, we’re giving a baby back to Rachel!â€â€¦.Monica
Nitpick of the episode-Once again I am giving the show a break. Many people scream foul because Rachelâ€™s date is Steve, the odd fellow from â€œThe One with the Stoned Guyâ€. They say she should remember him. But that was eight or nine years ago,how many people do you remember meeting for a few hours eight or nine years ago? So I will give her a pass on this one and say she just forgot him.Â  Oh, and yeah I know Joeyâ€™s eyebrows could never grow back that fast, but this is TV after all.
Standout Character-Rachel; I love her cringing during the awful date
SyndicationEdit-More of Rachelâ€™s date
Final Thoughts-This episode is ok, but since itâ€™s basically two stories it does feela little flatter than most. Itâ€™s always great to get Joey and Phoebe together.Rachelâ€™s date is hilarious and who would guess of all the characters to follow up on we get Steve from that clever Season one episode. Monica and Chandlerâ€™s stuff is ok, the whole ovulating thing is getting boring so glad they will mix it up in a few episodes. So not the greatest episode but there are some good gags. In the beginning Joey makes it clear his feelings for Rachel are goneâ€¦.yeah,I sense the season finale coming already.
Grade=B-,much like last time Jon Lovitz makes the episode!
Season 9, Episode 15
The One with the Mugging
Â

Plot Summary-Phoebe discovers she has a history with Ross after all, Joey discovers having to go to the bathroom makes him a good actor, Chandler deals with being an intern
Funniest Line-â€œC’mon people. C’mon now. If i don’t know who makes the most, how do i know who i like the most?â€â€¦.Phoebe
Nitpick of the episode-I didnâ€™t appreciate the gag about Chandler being â€œso oldâ€ in this episode. Maybe because I was just about the same age when the episode aired!
Standout Character-Joey, yeah itâ€™s stupid but how could you not laugh at Joey in this one?
SyndicationEdit-Jeff Goldblum has more lines, Joey telling Monica about his audition
Final Thoughts-its stunt casting time again! Actually to be fair once again they make an average episode pretty funny. There is some good character development, not only do we learn a little more about Phoebeâ€™s time on the street but it turns out she met Ross before. The scene between the two in the end is kind of sweet.Joey and Chandlerâ€™s stories are both kind of dull. At least Joeyâ€™s is memorable, even if it is grade school humor. Chandlerâ€™s is just dull. But I get that we need to see him actually learning so I guess I will let it go. And why was Jeff Goldblum cast in this episode? Heck if I know.
Grade=B-
Season 9, Episode 16
The One with the Boob Job
Â

Plot Summary-Monica and Chandler ask Joey for some financial aid, Rachel baby proofs the apartment while Phoebe asks Mike to move in with her
Funniest Line-â€œIf you have to call me name, I prefer “Ross the Divorcer.” It’s just cooler. Look, I know my marriage hasn’t exactly worked out. But I love the idea to be committed to another person.â€â€¦.Ross
Nitpick of the episode-Where did all of Monica and Chandlerâ€™s money go? Never thought Iâ€™d see an episode where someone was asking Joey for a loan
Standout Character-Phoebe, character development continues as she realizes it may betime for her to finally have a more â€œnormalâ€ life including marriage and kids
Syndication Edit-The opening teaser with Emma crawling for the first time
Final Thoughts-I have given this show lots of heat for the stupid way some of the past relationships have ended. This one was done beautifully. Probably because the creators knew it would only be temporary, but still Mikeâ€™s reasoning makes sense and so does Phoebeâ€™s. There is no sense in moving in if itâ€™s not going to go anywhere. Just a well-crafted story and I am liking the whole Phoebe/Mike stuff at this point. The big hug with the group at the end is another small reason why I love this show. I also love how itâ€™s Ross that makes Phoebe realize she wants the more â€œnormalâ€ stuff at her age, especially since he was insisting that she didnâ€™t usually do normal stuff. The story with Monica and Chandler asking Joey for money goes from silly to sillier, and Rachel baby proofing her apartment is really just a one note gag.
Grade=B+
Season 9, Episode 17
The One with the Memorial Service
Â

Plot Summary-Chandler and Ross try to out prank each other online, Joey refuses to give Emma his favorite stuffed animal, and Phoebe begs Monica to stop her from calling Mike
Funniest Line-â€œSo that’s what I’d look like if I worked out… and was being serviced bya policeman.â€â€¦.Chandler
Nitpick of the episode-Chandler and Ross use a public website to play tricks on eachother. I wonder if that social media stuff will catch on?
Standout Character-Monica, she is in mother hen mode here and as usual excels at it
Syndication Edit-Joey canâ€™t sleep without Hugsy (Yeah, dumb since weâ€™ve Joey sleeping without him a million times)
Final Thoughts-The stupid Ross and Chandler story gets sillier and sillier, and who canâ€™t see the ending coming when Ross bursts through the door announcing heâ€™s alive to the unsuspecting girl? Joeyâ€™s story is dumb to. I mean itâ€™s not as if we have seen Joey and his penguin so much that we understand how much it means to him. Joey just comes off like a big jerk, taking a stuffed animal from a baby. Phoebeâ€™s story makes sense and I have no problem with that one, I guess one out of three is ok.
Grade=C+
Season 9, Episode 18
The One with the Lottery
Â

Plot Summary-Joey decision to participate in the lottery ends up causing friction among the group, Chandler awaits word on whether he got a new job or not, Rachel thinks Emma said her first word
Funniest Line-â€œHello, this is the pigeon from the balcony calling to apologize. I shouldn’t have knocked the tickets out of the pretty lady’s hand. It was my fault, not hers. Bye. Cooo.â€â€¦.Phoebe
Nitpick of the episode-Why? Why did they have to ruin such a good episode with that stupid story about Emma saying her first word? And having Rachel think gleeba was a word was just DUMB!!!! Â I get she wants to be proud of her little girl, but at least wait until she does something first! Â And why did she call Emma the same exact moment the lottery started, she couldnâ€™t wait ten more minutes?
Standout Character-Chandler, happy he finally got a job he loves
Syndication Edit-Scene Extensions
Final Thoughts-This is a bottle show with all the friends together. So yes I loved this one, itâ€™s a highlight of season 9. There really isnâ€™t too much to even say about it, just the friends all together and all the characters were clicking.It is nice to see Chandlerâ€™s character develop with the new job. The story about Emma speaking her first word is tacked on, and stupid, but it doesnâ€™tspoil the episode.
Grade=A-
This last episode is the high point of the season, as we will see later this week itâ€™s all downhill from here!
Share on Social Media
twitterfacebooktumblrredditemail
Follow us on Social Media
twitterfacebookyoutubetiktok