Plot Summary-Rachel has a hot dream about Joey, Chandler has to share a romantic weekend getaway with Ross, and Phoebe drives customers away from Monicaâ€™s restaurant by singing
Funniest Line-â€œI think these people have seen me before. They were requesting some of mysongs. “You suck” and “Shut up and go home”.â€â€¦.Phoebe
Nitpick of the episode-Regarding the whole Rachel story-WHY???
Standout Character-Phoebe, nice to get a new Phoebe song, they had kind of faded from the show
Syndication Edit-Monica getting complimented in the restaurant
Final Thoughts-I really donâ€™t get it. The whole Joey/Rachel thing was dead and buried. Why revisit the well? The only part I liked was how it ended, but we have several episodes to get through before that one. It boils down to one thing-Rachel having feelings for Joey makes no sense!! The Chandler/Ross stuff sucks to; the gag about Ross and hotels has already been done. Monica and Phoebe are adorable together and while the story is silly, itâ€™s also the only fun thing in the episode.
Grade=B-
Season 9, Episode 20
The One with the Soap Opera Party
Â

Plot Summary-Everyone finds out Joey holds a soap opera party on the roof every year, Chandler gets stuck at a feminism lecture, Rachel decides to pursue her feelings for Joey, Ross has a new girl who picks Joey in the end
Funniest Line-â€œ Oh, man! If I had known I was coming to this party, I would have never got married!â€â€¦.Monica
Nitpick of the episode-Why would Charlie go for Joey, except to mix things up of course.The gag with the boring professor was lame, what professor could be that boring?
Standout Character-Joey, considering how Rachel and Monica have acted in the past I can understand why he didnâ€™t tell them about his annual party
Syndication Edit-Scene Extensions
Final Thoughts-Ok to be fair, there are some genuine laughs in this one. Chandler barely has a story but the sight of him sitting by himself in the row of seats was funny. But as far as stories goâ€¦.itâ€™s ok. The soap opera party seems pointless for the most part. Why is Rachel so shy about telling Joey her feelings, chances are he will be interested. Once we meet Charlie we know how she is going to mix the plot up, and why even bother putting her with Joey? Big shock, she will be with Ross in a couple episodes. This is just to drag things out. Speaking of dragging things out, letâ€™s go to the next episode.
Grade=B-
Season 9, Episode 21
The One with the Fertility Test

Plot Summary-Monica and Chandler visit a fertility clinic, Ross helps Joey to impress Charlie, Rachel discovers a secret about Phoebe
Funniest Line-â€It means that my guys won’t get off their barcaloungers, and you have a uterus that is prepared to kill the ones that do.â€â€¦Chandler
Nitpick of the episode-I love Janice in this episode because she really feels like a real person rather than just lame comic relief. The scene where Chandler talks to her like a friend is one of my favorites. On another note, they repeat theâ€œIâ€™m wearing two beltsâ€ joke from the wedding episode at the end of season 7!Thatâ€™s pretty bad when you start reusing old jokes.
Standout Character-Monica and Chandler, about time they realized there might be a problem and itâ€™s nice to see a show deal with something so sensitive
Syndication Edit-Longer opening, Charlie explains why she kissed Joey
Final Thoughts-This episode is hard to talk about because there is some real interesting stuff here but itâ€™s not that funny. We find out Phoebe has a real job at a massage parlor. She didnâ€™t admit because she thought it was selling out. The stuff with Ross and Joey is just to pad that arc out; we all know itâ€™s headed for the season finale. I am very impressed with the Monica/Chandler stuff and how serious that subject is done. It seems on shows that people canget pregnant no trouble and it doesnâ€™t always work that way. Janice is fantastic in this one and the final scene between Monica and Chandler is one ofthe most moving moments of the entire series.
Grade=B-
Season 9, Episode 22
The One with the Donor
Â 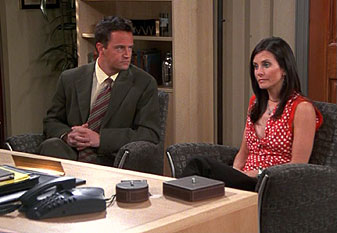 Plot Summary-Chandler and Monica begin interviewing men to be a donor, Phoebe runs into David while Rachel is being mean to Charlie. Ross has a chance to present a lecture in Barbados.
Funniest Line-â€œMe too. I wanna find a baby that needs a home and I wanna raise it with you. And I wanna mess it up in our own specific way.â€â€¦.Chandler
Nitpick of the episode-What was the point of that tease when we think Charlie heard Rachel saying she liked Joey, turns out Charlie misunderstood. This is pointless padding! It doesnâ€™t even make sense, how could Charlie make that mistake?
Standout Character-Rachel, her mean streak we saw way back when Ross and Julie were together is back, only aimed at Charlie this time
Syndication Edit-Rachel and Phoebe testing the dressing room
Final Thoughts-This episode is clearly setting up the season finale. Because of that all the stories feel like set up. Ross get to speak in Barbados, gee I wonder where the final episode will be set? Phoebe runs into David out of the blue,gee I wonder if there will be a triangle of some kind? Rachel is being mean to Charlie, gee I wonder where thatâ€™s going? The only good story is the Monica/Chandler one, especially the end when Monica says she doesnâ€™t want to have a baby with another man she wants one with Chandler.Awwww. That leaves one avenue unexplored, adoption.
Grade=C+
Season 9, Episode 23 & 24
The One in Barbados
Â

Plot Summary-The gang goes to Barbados where Ross is giving a lecture. Charlie decides to break up with Joey and turns to Ross, Monicaâ€™s meddling brings Mike back to Phoebe just as David plans to propose, Rachel finally reveals her crush to Joey
Funniest Line-â€œ All right, I don’t wanna alarm anybody, but Monica’s hair is twice as big as it was when we landed.â€â€¦.Rachel
Nitpick of the episode-Why is Monicaâ€™s losing to Mike at ping pong given so much weight? Itâ€™s not as if we have never seen her lose before! Â By the way, back when Monica and Chandler got engaged the creators had intended Richard and Chandler to propose to Monica at the same time, but that was nixed and the dual proposal was done here with Mike and David proposing to Phoebe at the same time.
Standout Character-Ross , fun to see him as the celebrity for once
Syndication Edit-Monica calling Mike, Joey and Rachel at the pharmacy convention, Ross and Charlie briefly interrupt the ping pong game
Final Thoughts-This episode is not the best season finale ever. It is the last so thank goodness for that. Phoebeâ€™s story wraps up in part one so they needed a different story in part 2, in this case the ping pong game. Itâ€™s not bad but why didnâ€™t they stretch the proposal story out more? They rush Mikeâ€™s appearance so fast one minute heâ€™s long gone and the next heâ€™s just with the group like nothing had changed. Chandler and Monica are really just here, to be here. The main drive is the whole Ross/Joey/Rachel/Charlie story which frankly is a bore. Charlie discovers she is smarter than Joey? Imagine! Ross finally reveals he likes her just as Rachel reveals she likes Joey. Granted, the scene with Rachel and Joey is played pretty well. But that stupid cliffhanger, having Joey walk in and kiss Rachel was lame. It may be the worst cliffhanger because not only do we not care, but ultimately it has no effect on anything. Usually the cliffhangers change the series in some way; this one will do nothing to ultimately affect the show. As we will see next week, it will be concluded three episodes later.Â  Itâ€™s just to keep Rachel and Ross apart longer.
Grade=C+
Well folks, weâ€™re almost done.Â  Next week we take a look at the final season,and see just what note this show will go out on
Share on Social Media
twitterfacebookemail
Follow us on Social Media
twitterfacebookyoutubetiktok