I freaking love The Brady Bunch! The show went off the air a few months before I was born, and I literally grew up watching the re-runs on my local Boston station, WLVI. For awhile I watched them downstairs in my parents furnished basement, until the TV blew up. I was forced upstairs after that but still watched every day. Now as an adult the show brings back good memories of better times, and what’s wrong with that? So all this week I am going to take a look at my favorite show. I will discuss what I love, what I hate, and things which just baffle me. and yes I will even be looking at the reunion specials which are very hit or miss.

My favorite era on the show was the second and third season. The first season was so melodramatic that I always hated those shows. Though there were some good episodes in there. The final season was, well, that dreaded final season. Again there was some good in there, but also a lot of bad. But I decided today to focus more on the good. I am aware that while this show is loved, it gets its fair share of hate. So I present five popular misconceptions about this show and I hope to dispell some of the myths that drive me nuts.
As always this is just my opinion, if you hate this show that’s cool. But here are five things picked on about this series which I think are unfair.
#5.Only one Bathroom and no toilet for Nine People

I don’t get this, back in the old days no one was allowed to show a toilet on TV. This was something Archie Bunker changed. But why do the Brady’s get singled out for this? Obviously they have one and there are jokes about the Brady’s going to the bathroom sprinkled through the series. For instrance in the Grand Canyon trip we see the Brady’s making a pit stop for one of the younger kids (I don’t remember who). I do understand making fun of the fact six kids shared one bathroom, that’s fair, but folks we know Mike and Carol have their own bathroom as well as Alice. And in A very Brady Christmas we find out there is another one under the stairs. Isn’t it safe to assume there is a toilet there somewhere? My real question is this, who is watching this show wondering about the location of the toilet??? Really?
#4.Alice

Some argue that Alice is not realistic. They say a normal housekeeper would be raiding the liquor cabinet or something. Uh, yeah why is that? Many people have housekeeers in the world who become like a part of the family. People forget that Alice has known the kids, especially the boys, for a majority of their lives. Of course she is close to them! She also acts as an honorary aunt. Don’t believe me? Watch the episode where she gives Jan a locket and tell me that isn’t true. Yeah of course Alice is the comic relief which means she gets the funny lines and involved in silly situations. But I don’t think she is as unrealistic as people think, in fact she may be the more down to earth character since in many episodes she can figure things out the rest of the family can’t. Like how the cigarettes got into Greg’s jacket, or how to get Marcia in to see Davey Jones. Then people raise other questions like what does she get paid (she is a live in maid so most of her paycheck goes to groceries I would imagine since I doubt she is charged rent)? and when in the world did she eat dinner (umm, ok that’s a good one)? God love Anne B.Davis, and how I didn’t put her in my list of my favorite characters baffles me. Um, we’ll say she was #21.
#3.Cousin Oliver killed the show 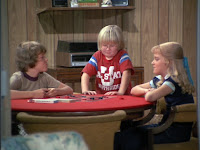 Well, not entirely. Yeah adding him did nothing to help the series which was quickly cancelled six episodes later, but here’s the thing. The show was on its way out before he joined the cast. I mean, in that season we had an episode about Bobby and Peter tracking a UFO, a backdoor pilot which hardly had the Brady’s in it, an episode set at an amusement park, an episode where the family puts on a backyard production of Snow White, and the classic episode where Greg steals a goat which proceeds to run around the house. To put it simply, the show was on its last legs that year before Cousin Oliver was ever brought in. I am quite sure if he had never been added, there still would never have been a sixth season. Did I mention the episode about Peter and his double? Robbie Rist has always had that rep as the thing that killed teh show. In fact, in a Brady episode of “The Weakest Link” when Robbie was voted off Anne Robinson commented “You will not get the chance to ruin this fine show, as you have so many others before”.
#2.”Marcia, Marcia, Marcia!”

First of all, she only said that once. In the 90’s Melanie Hutsell created a character based on Jan Brady in the Brady Bunch live show and on Saturday Night Live. To be fair, the impression was funny. But for some reason many people think that Jan actually acted the way Ms.Hutsell portrayed her. That was an exageration. Jan did have problems on the show, no question, but it bothers me people remember the parody rather than the actual character. Yeah some of her problems when she was the focus were a bit out there. She makes up an imaginary boyfriend, wears a black wig for no real reason, and in one episode she even has an inner monologue with herself. But I always felt she had some of the more realistic problkems of the kids, it’s hard growing up as a middle child! But when she was not being a classic middle child or the focus of the episode she was as normal as the rest of them. In fact of the three girls I like Jan the best because she was the most down to Earth. She isn’t shallow like Marcia or dumb like Cindy. Why is she always singled out as the weird one? Peter was much worst in my opinion, unable to hold a job or take any responsibility. I have no problem with how Eve Plumb reacts when people ask her to repeat that famous phrase, I wouldn’t appreciate it either especially since she isn’t the one who made it famous. A lot of people are hard on Eve Plumb because she tends to resist her Jan image. I respect her for being willing to achnoledge her role but refusing to let it be all she is known for. I mean, it’s not as if William Shatner stopped working after he did Star Trek or Ted Danson refused to try new things after he was done with Cheers. They love their fans but want to be know for more than just that one character.
#1.They are so happy ALL THE TIME

Ok, I am going to try to make this clear. First of all, in terms of sitcom families yeah The Brady Bunch is on their own level. They are like Full House or Cosby, a happy family not that realistic and you can’t take it to seriously. But what really bothers me is that people hate the show because the family is always “happy all of the time”. Um, have you ever really watched an episode? The kids have fights, argue, competes, can be angry with each other, place bets on each other to fail, play mean jokes on each other, will turn against each other, will tell on each other, and be down right mean spirited. Seriously, all of these things happen in episodes. True, it never lasts and everyone is happy in the end. But they are not happy every second. They also experience sadness and pain, Marcia has some major dramatic scenes where she is crying and depressed. Jan had near psychotic episodes, Bobby almost ran away in one episode and was crushed by an unintentionally hurtful comment by Sam in another, Cindy wasn’t very happy after what Buddy Hinton said to her. Mike has gotten downright angry at some of the kids at times. Even Greg was devastated when it turned out he wasn’t such a good pitcher. And what the kids do to Alice in one episode borders on just plain cruel! It wasn’t always roses and sunshine. But people focus on the happy endings in every episode, how the family always happily does stuff together, and how every story gets neatly wrapped up before the closing credits. You know why that happened? IT’S A TV SHOW! I always feel that people who felt this way may have been people who, and god bless them if they did, had a tough time growing up with a dysfunctional family. They can’t conceive of a family who is happy even on TV. What is wrong with that? It does happen in the world.
Well, that’s how I feel about it anyway. To show I am fair, tomorrow as Brady Week continues I will talk about six episode that I flat out hated (and no, they’re not all Cousin Oliver episodes)