Aladdin and the King of Thieves Review

When the Aladdin TV show ended in 1995 reruns were constantly being shown to keep the fanbase happy while the crews from that show were put to work on other projects. It was then Disney realized that they didn’t give the Agrabah universe a proper sendoff so the crew was reassembled with a bigger budget and the result was Aladdin and the King of Thieves released direct to video in 1996!

The story focuses on Aladdin’s father coming back into Al’s life. Cassim (Al’s father) is the leader of The Forty Thieves, the most feared bandits in all the 7 deserts, and crashes Aladdin and Jasmine’s wedding (he assumes Al is dead along with beloved wife) searching for an Oracle that will lead him to the hand of Midas, a hand that turns anything it touches to gold. The actual plot of the film isn’t bad at all, but it can’t hide the absolutely ridiculus contrivances that make this plot possible.The plot also has very clichÃ© moments in the father son type plot. For example of contrivances Aladdin’s worried that he’ll be a bad father because he had no father growing up and no role model. This is stupid because what does that make the Sultan? The Sultan is the closest thing Al has ever had to a father and one would think they would have bonded and connected so that if he wants advice he can ask the Sultan!!!! Also wasn’t it decided in the first film that Aladdin shouldn’t have parents because the story wouldn’t work? This film just pisses all over that and doesn’t even recognize the contributions that Aladdin’s MOTHERÂ  had on the boy’s moral compass and upbringing. With that being said we are treated to a fairly nice father and son story, clichÃ©s and contrivances and all.

I’m only going to do 2 characters this time because all the others including the villain are just okay. The original characters are their usual selves.

GENIE: I had to talk about Genie because ROBIN WILLIAMS IS BACK!!!!!!!!!!!!!!!!!!!!!!!!!Â  And boy is he hilarious!!!!!! That bachelor party joke is funny as hell. That should be an animated short before the next Hangover movie “Aladdin’s Bachelor Party”. Awesome! Not only is he really funny he actually gets to do something! He’s effective without being too powerful or too weak!! Finally after 86 episodes they got it right! 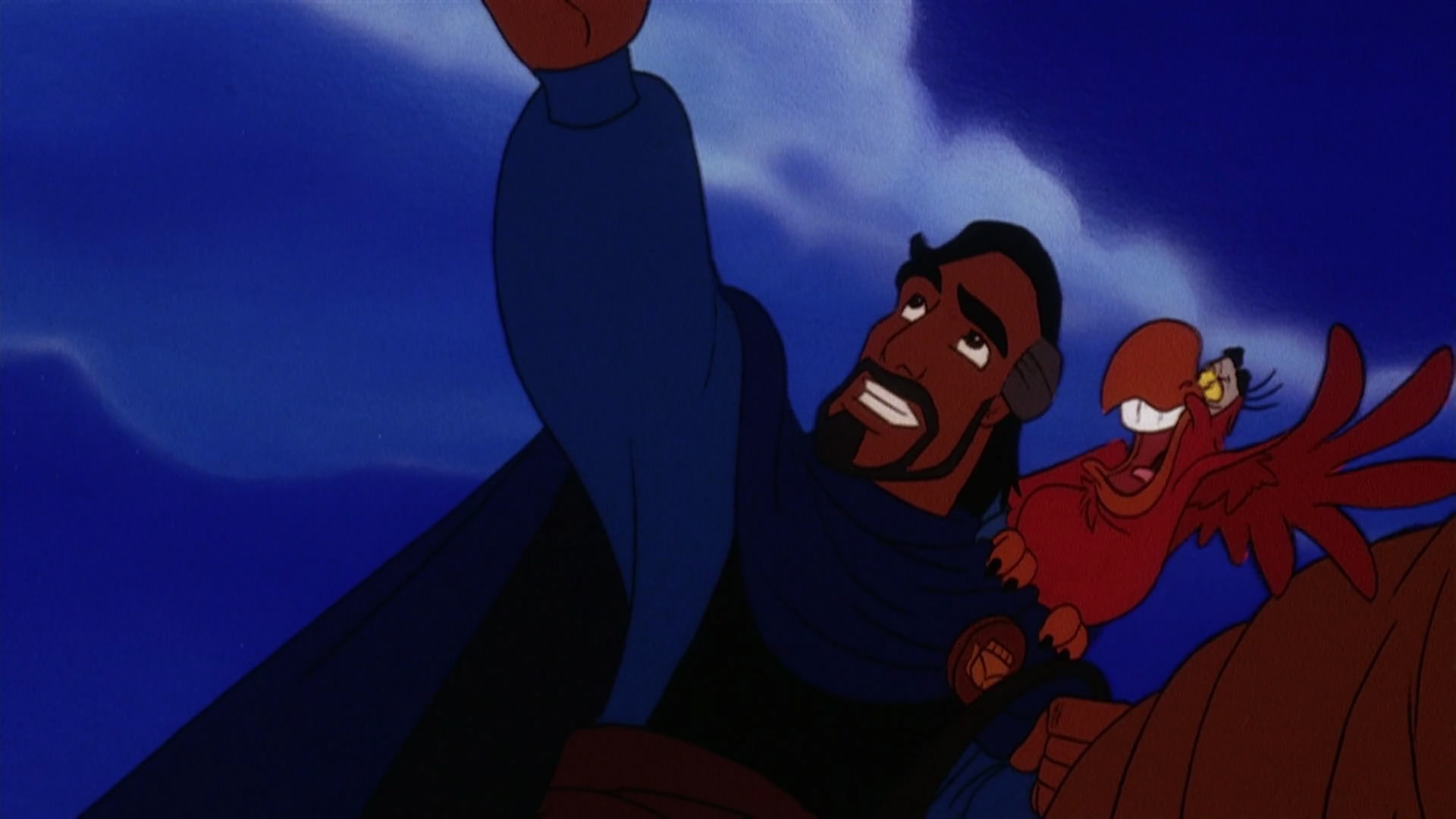 I had to talk about Aladdin’s father. Cassim is a really good character. John Rhys Davies’s performance adds a sense of charm and likeability to the character despite the fact he left his wife and son for a treasure that was damn near unattainable. When he does meet his son you can tell that he is very proud and happy for his son and the type of man he’s become, which is a better man. Through his reunion with his son he gains a new sidekick. Iago! The film establishes that Iago and Cassim play off each other very well. I wanted a spin off show starring Cassim and Iago! That would be awesome!! Cassim and Iago fit the adventure format much better than Aladdin because adventure is ingrained into Cassim’s character (treasure hunter and explorer and professional thief). Like Ariel before him Cassim has that sense of grand adventure and Iago has his own charms and skills that would have fueled a great show!

Another truly disappointing thing about this film is it’s music. The music and songs are very mediocre except for one.

“There’s a Party Here in Agrabah”

This is an okay introduction song to Agrabah getting ready for Aladdin and Jasmine’s wedding. Robin Williams’s energy and humor prevent this song from becoming completely forgettable. The odd thing though is that this song actually stops for about a solid 2 minutes and the audience thinks the song is over and then it comes back and the audience doesn’t see the point anymore.

“Out of Thin Air”

Again another okay song. There’s nothing special about it. The song is basically Jasmine encouraging Aladdin to use the Oracle to find out where his father is. One thing I forgot to mention is that: “Who was the Oracle’s original owner, Who gave the Oracle staff as a wedding present for Al and Jasmine?, How did Cassim know where to find it?” If you’re expecting answers you are giving this movie way too much credit.

“Welcome to the 40 Thieves”

Again another mediocre song. This is a song that basically is the Thieves welcoming Aladdin, Abu, Iago and Carpet into the gang. There’s nothing special here.

Not even Robin Williams could save this song. This is probably the worst song in the film. It’s a song about how Al and Cassim should be best buds and all that other crap that’s already been established in the genuinely emotional reunion in the 40 Thieves’ lair.

This is the villain song! The Thieves sing about going back to their brutal and no mercy tactics. I actually find the song amusing because they’re talking about doing all these terrible things and it’s in the style of a mediocre showtune. It’s impossible to take these guys seriously. (Yo Ho a Pirates Life for Me doesn’t count because it’s a party and drinking song. Partying and drinking are two things pirates love to do so it’s fine and doesn’t dampen the brutal nature of pirates)

My favorite scene in the entire film. This song makes you feel like you’ve come full circle and adds much needed closure to the Agrabah universe.It even had Bruce Adler who was the original person who sang the song returned. It’s also awesome because it shows Cassim and Iago riding into Moonlight. When I saw that I was still psyched for the Cassim spinoff that I knew was never going to be made.

This film had a bigger budget which means the animation is a big improvement over the show and Return of Jafar. The art direction is still solid and the world of Agrabah looks great.

While this film is not the greatest Disney sequel by any means it is still a good film. It has a satisfying story and a great new character that still has yet to reveal his true potential. The world of Agrabah would not be visited again for another 6 years until it was brought to life in an interactive, dark, and epic way with 3D graphics technology in the epic Kingdom Hearts series. Join me next time where I celebrate my first Halloween as aÂ  blogger by celebrating Haunted Mansion Month!!!!