Aladdin’s popularity back in the 1990s was strong enough to warrant an animated series just like Little Mermaid before it. The show ran from 1994 to 1995 and had a whopping 86 episodes, more than twice Mermaid’s length. The show offered grand and exciting adventures that were a lot of fun. With that being said there are a few shortcomings surrounding the genie that really dampens the conflicts and how the conflicts are resolved.

The premise of the show is very similar to Mermaid. Every episode usually involves Aladdin and friends embarking on a grand adventure to find a lost treasure or a lost civilization where no doubt a villain awaits them. On the subject of villains like Mermaid before it the universe of Agrabah expands and new baddies are revealed. Some like Abismal and other D-List magic users were unbelievably lame while others like the cat mage Mirage and the sorcerer king Mozenrath offered powerful and sinister villains that can sit comfortably in Aladdin’s rogue’s gallery next to Jafar. The characters are still their usual selves, but I do have a few problems. One is with Aladdin himself. In the original film Aladdin wasn’t an adventurer, he was a poor boy that wanted people to judge him on what was found in his heart and not by his socioeconomic status. Then at the end of Return of Jafar he says out of the blue that he wants to see the world and go on adventures. This doesn’t jive with what’s been established in Aladdin’s character. I just can’t help but feel that this was Disney shoehorning Al into the adventurer archetype to have another adventure show based on such a popular property. It just seems cheap. Another thing that makes me a little upset is the fact that Genie is virtually useless. He’s just there to make jokes.Â  His magic isn’t useful at all. I understand that you don’t want him to go the way of duct tape and have him be the universal solution to every problem, but this is taken way too far with Genie getting his ass kicked by the aforementioned D-List magic users and the fact that Genie can’t undo the magic of obviously lesser magic users because it’s “too dangerous”. I know that his powers are weakened, but not THAT weakened. In the end it’s very unsatisfying. The stories and themes are still very good and make the show entertaining despite its shortcomings. 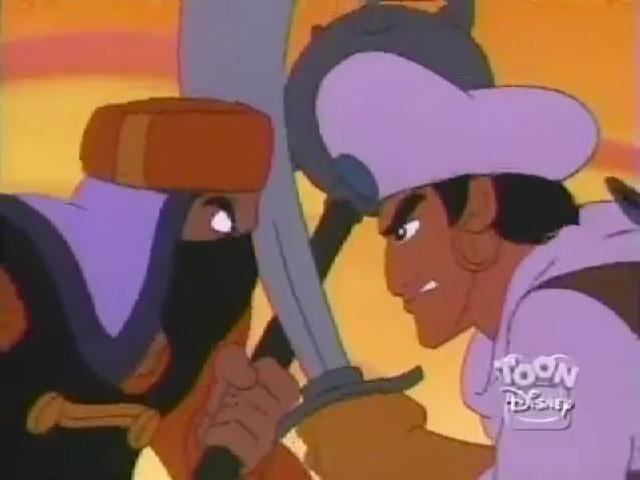 Aladdin the Animated Series is a fun and entertaining show, but due to the inconsistency of character motivations and powers there are quite a few episodes that are a drag and very unsatisfying. Despite these shortcomings the show is still a good time.