Recently, wreceived some shorts that revolved around Rainbow Rocks and after the original trailer, which didnâ€™t really much, It was refreshing to see something different. So I decided to take a look at both of them.

“Music to My Ears” 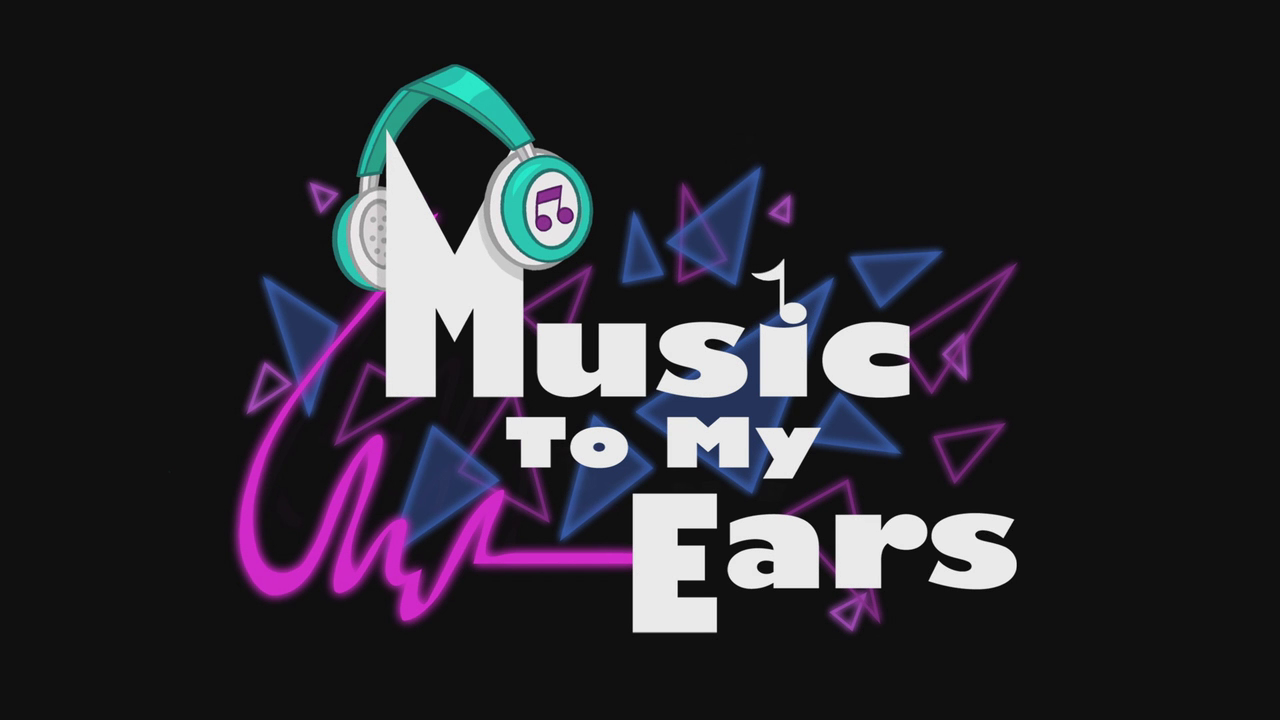 The first short was Vinyl Scratch/DJ-Pon3â€™s EqG Counterpart and her listening to her music as she goes about her day.

â€¦and thatâ€™s pretty much it.

There isnâ€™t really much to say about this. All Vinyl does is walk around, Listen to Dubstep, and heads back to the School. Five of the Mane 6 make a cameo in it while at a Coffee Shop. Iâ€™ll admit that the short didnâ€™t give anything away relating to the film, at least I donâ€™t think so, aside from knowing Vinyl will have a major role in the film.

Vinyl doesnâ€™t talk at all which probably could be a good thing as many people love the Fandomâ€™s VA for her. (I forgot her name at the moment, but I do like her as well.)

The only problem I had with the short is simpleâ€¦I Hate Dubstep. No offense to people who do like it, I just find it to be extremely loud, Annoying, and very Pointless music that would make Lou Reedâ€™s Metal Machine Music seem like New Age Sounds of Nature.

Aside from that, I thought it was a good short. 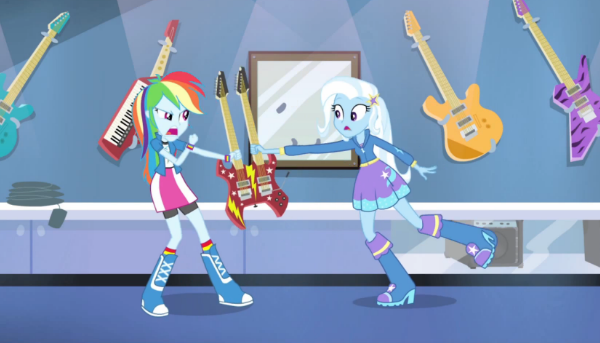 The Five Girls decide to go to an Instrument Store/Guitar Shop so Rainbow Dash can replace her incredibly damaged Guitar. She spots a Double Neck Guitar and decides to get it, but Trixie wants it as well. So the two decide to have a Rock Off to decide who gets the Guitar. (Let Me Guess, the winner also has to pay Tenacious Dâ€™s Rent.)

They basically play some Riffs and Rainbow somehow activates her powers and wins the competition but decides to take the Guitar she won the battle with instead of the Double Neck. Trixie then buys it, but finds out it costs $12,000.

I have to admit, it was nice seeing Trixie again and getting more lines than the first movie. Plus I had no idea she could play Guitar. With Rainbow Dash playing Guitar, wasnâ€™t very surprising at all since they build her up to be â€œAwesomeâ€ all the time. I want to know how exactly she can activate her powers simply by playing Guitar. (It would make sense to me if she were playing a Jimi Hendrix or Jimmy Page song extremely accurate.)

Personally, I thought it Good as well. 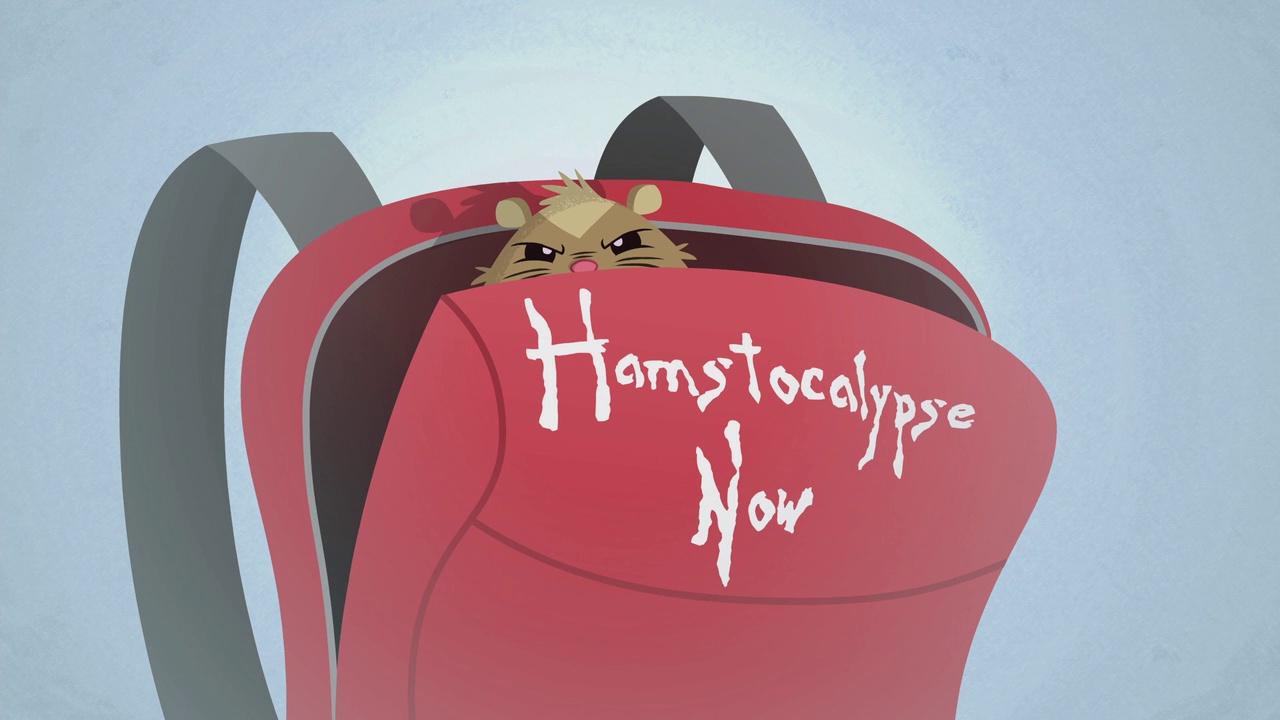 Fluttershy gets assistants for Rarity for taking care of an absurdly large amount of Hamsters in a Pet Store while she takes care of cleaning their cages. After sheâ€™s done, they are everywhere and apparently Rarity named all of them and turned them into some kind of Hamster Soap Opera. Fluttershy then uses her Tambourine, which apparently hypnotizes them, and gets them back into their cage. 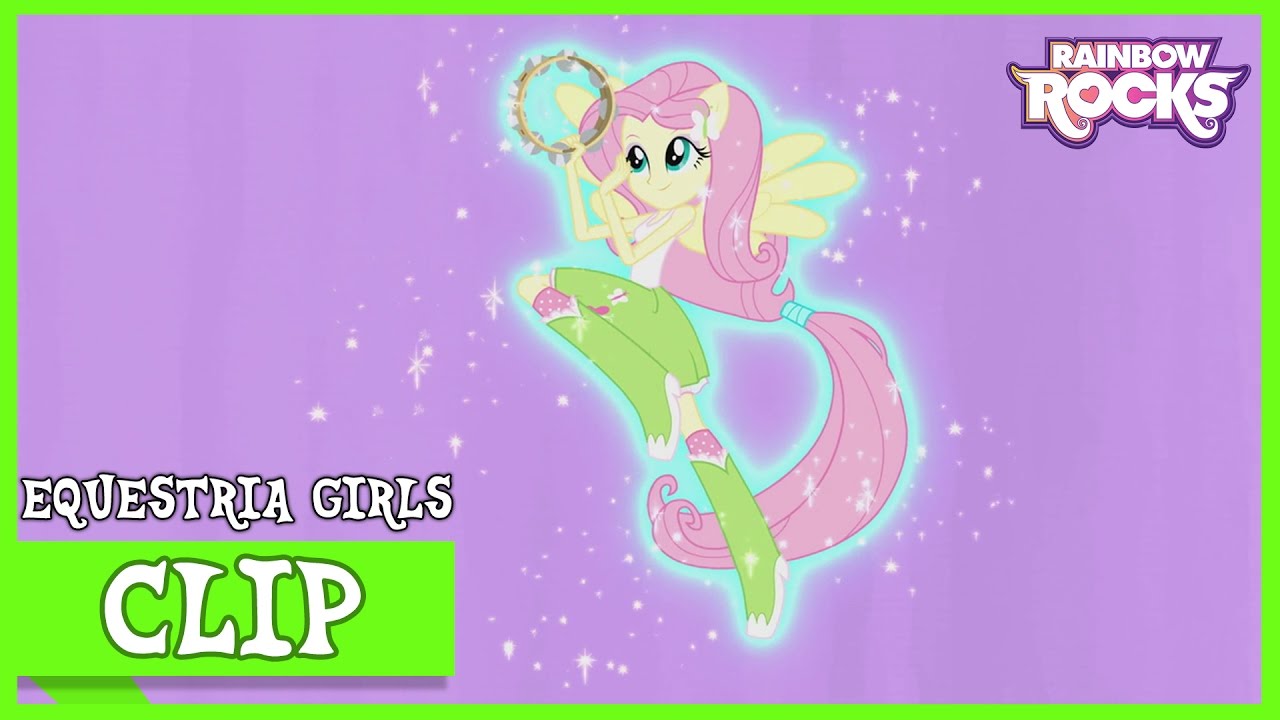 Unlike Rainbow Dash who had to get a new Guitar, Fluttershy already had the Tambourine. (If it was Green, I would recognize the Obscureâ€™60s song reference.) Much like Rainbow Dash, when she plays the Tambourine, she activates her Powers by simply playing. I wish they would explain how that works. I hope they do in the future.

Also, The first thing that popped in my head when I saw the title was Colonel Kurtz whispering “The Horror. The Horror.” (It’s Incredibly Obvious Why.)

I thought it was a good short overall.

Pinkie on the One 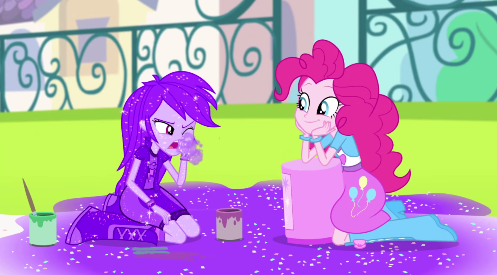 Rainbow Dash is seeking a new Drummer for her band, but she just can find anyone who has the Energy, the ability to use both hands at once, and the right â€œinstinctsâ€ apparentlyâ€¦

â€¦That would be Awesome, but no, itâ€™s obvious she picks Pinkie Pie for it. 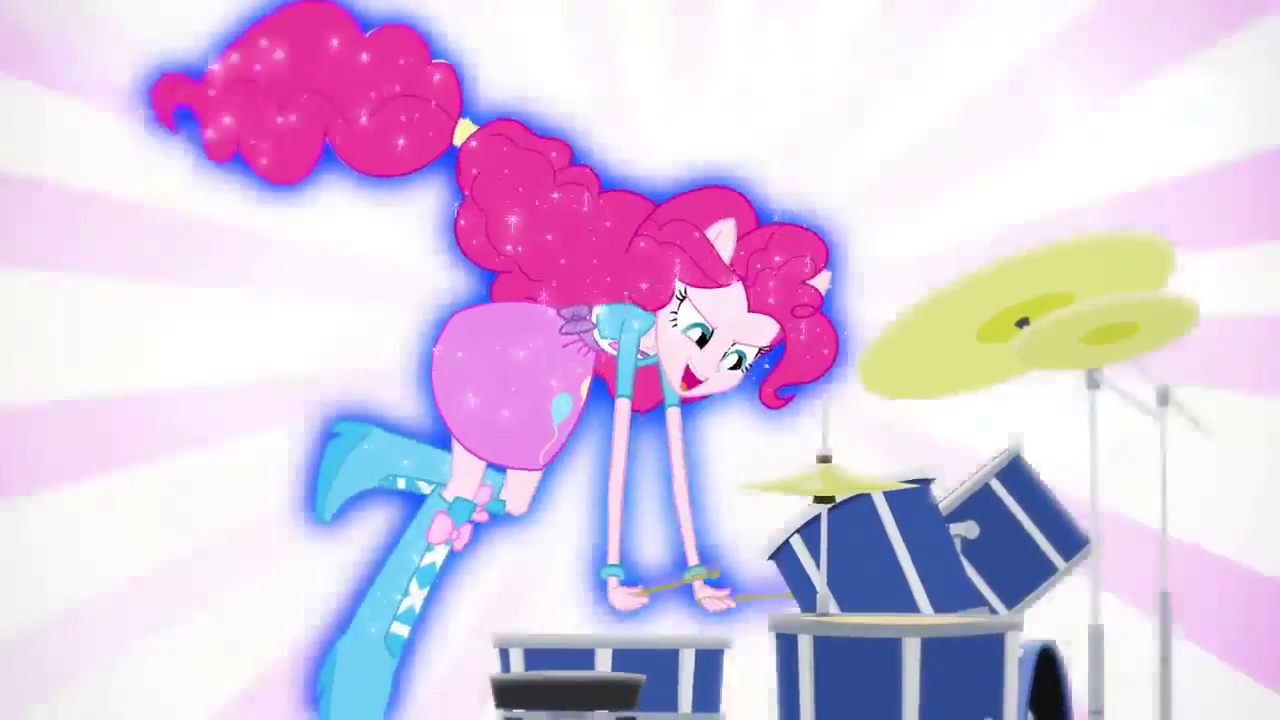 After playing a small solo, Rainbow is pretty much convinced and she becomes a member of the band.

The set-up for this was very different for the other shorts. It didnâ€™t really have anything happening in it like the previous ones. This one was just a bunch of things happening throughout the day mixed in with some Comedy instead of one major event that needed Pinkie to be on Drums. (Iâ€™m mainly basing this idea off Rainbowâ€™s short Guitar Centered.)

Pinkie Pie being on Drums wasnâ€™t much of a surprise for me. It seemed very fitting for her.

Overall, I thought it was a good Short. (This has been pretty repetitive hasnâ€™t it?)

Rarity has to get her Piano to band practice but can barely move it. So she gets the help of the Diamond Dogs by having them carry it with her on top. 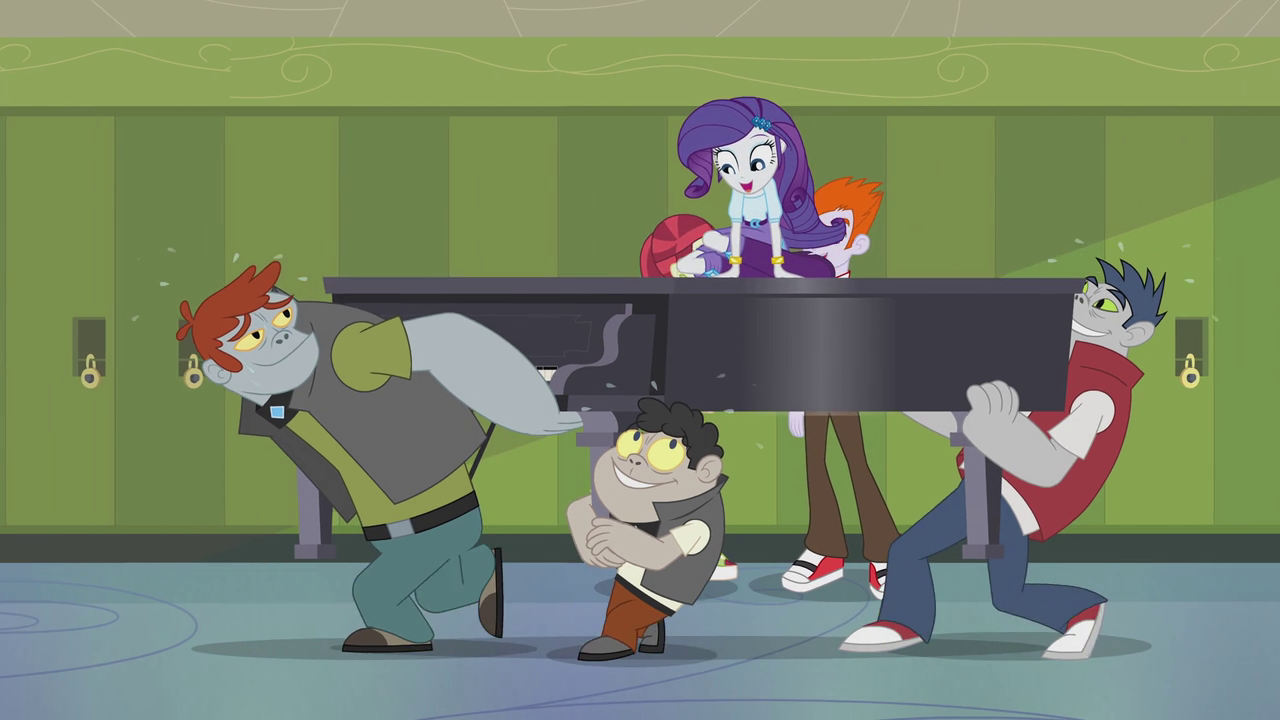 [I have to admit the Diamond Dogs look weird in this.]

When she arrives, they run out of time and have to move their practice to the gym. Pinkie then suggests instead of using the Piano, she recommends the Keytar since itâ€™s lighter. She then accepts using it by simply playing it. (Like everyone else, thatâ€™s how she activates her powers.) 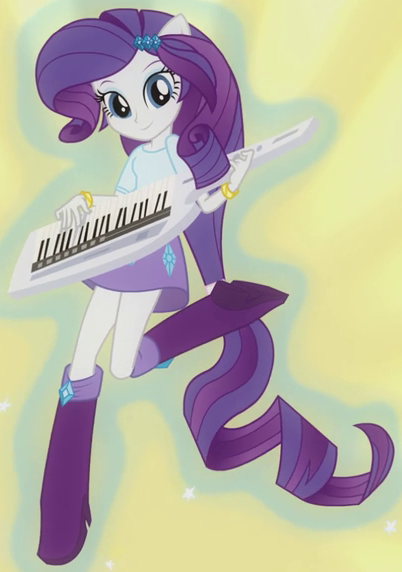 This short, much like Music to my Ears, didnâ€™t anything that resembled a real conflict. It seemed more like a Minor inconvenience. So that was a bit of a disappointment for me.

The one thing I was really wondering since the first trailer came out is â€œWhy does Rarity get a Keytar?â€ I understand why sheâ€™d have a Piano, but since they are trying to come off similar to an 80â€™s Rock Band, I think Rarity should have a Synthesizer instead.

Never the less, I thought it was a decent short. Plus I actually think this was one of the weaker shorts. (Thatâ€™s a shame considering Rarityâ€™s one of my favorite Characters on MLP.)

A Case for the Bass 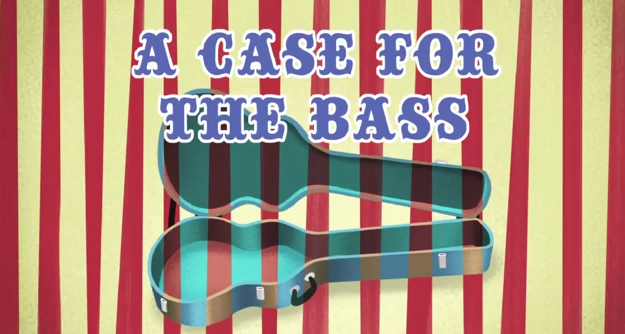 During a Yard Sale at the Apple Family Home, Granny Smith accidentally sells Applejackâ€™s Bass Guitar to a couple of Pawn Shop owners and the Girls decide to get it back.

â€¦and who ones this Pawn Shop? None other than two of my favorite Secondary Villains from the show, Flim and Flam! 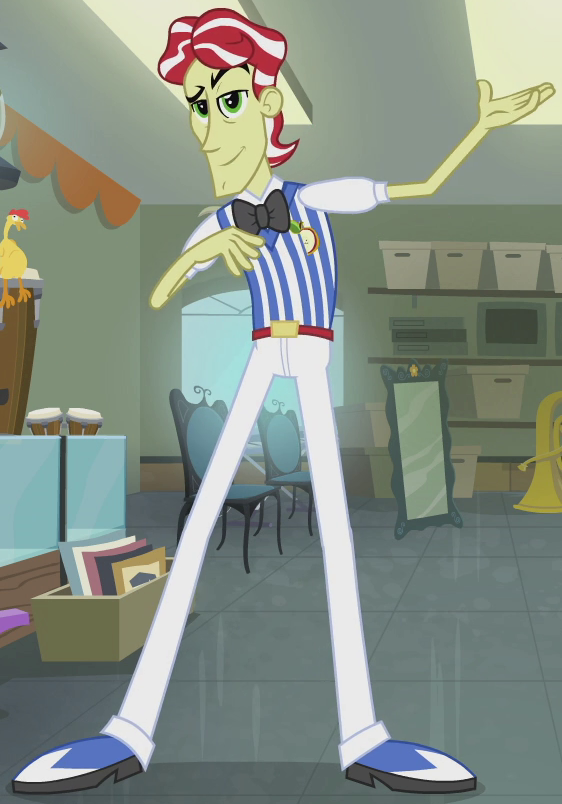 (At first, the wayÂ they look bugged me, but seconds later I got over it.)

She tries to get it back from them at the same price of $2 that Granny Smith sold them, but instead they ask for $1000. Plus they also have their doubts, suggesting she canâ€™t even play the bass. So, she does to prove them wrong. Even after doing so, they still want the money, but they instead come up with the idea for a trade so she doesnâ€™t have to give them the money which ended up having Applejack in a Banana Suit advertising their store.

â€¦Youâ€™d think it would be an apple suit, but I guess they probably didnâ€™t have one in their shop.

( One thing I did notice in the pawn shop was that thereâ€™s a Dark Side of the Moon Album except it had Rainbow Power instead of the Traditional Rainbow on it. I thought that was a nice touch. They also had the first Velvet Underground album as well.Â )

Granny Smith does bring up an interesting question. â€œSince When Do you Know how to play Bass?â€ I am actually very intrigued on that question with most of the Girlsâ€™ instruments. Except Fluttershy, the Tambourine is way too easy to learn. Rarity and Rainbow were most likely given Lessons. Pinkie pretty much knew how the instant she sat in front of a Drum set.

As for Applejack, I think she probably got to learn bass by hanging out with Lemmy Kilmister.

Or maybe since sheâ€™s a cartoon, maybe she hung out with Murdoc Niccalsâ€¦ Never the less, I do think that a Bass Guitar is very fitting for Applejack. (Either that or she should have an Acoustic Guitar.) 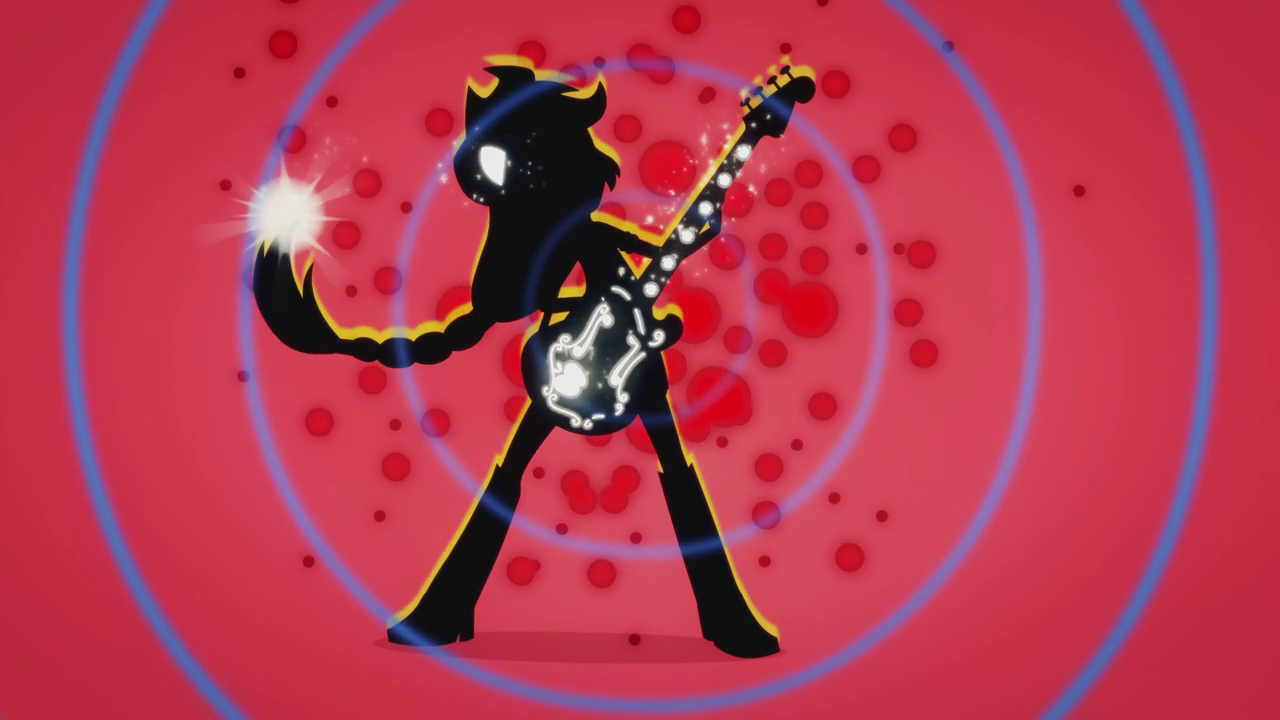 I know Iâ€™ve mentioned this before, but this is still an important issue for me and for all of the shorts. I really want them to please explain WHY playing an instrument suddenly activate their powers. I really need this to be explained. Itâ€™s happened for the entire mane 6 and itâ€™s starting to bug me.

Overall, I think this was probably the best of the Shorts so far. Even though I not a big Applejack fan, I still enjoyed it a lot.

Well, This probably might beÂ all of theÂ shorts considering Twilight Sparkle doesnâ€™t have an instrument to play. Although, they still could do a short about Sunset Shimmerâ€™s role in the next film since Rebecca Shoichet announced she would be in itâ€¦.I just really hope Flash Sentry isnâ€™t in it. Iâ€™ve started to get annoyed by him recently…