It Came From the Drive In: Doom (with Jim Bevan)

Creature: A Long Time Ago in the Early ’90s, the world of video games was coming to a new age of Home Entertainment with New Genres and Higher Quality. One of the more popular genres to spawn was the First Person Shooter which put the player in the point of view of the main character and was popularized with a little game called Doom.

The Original game from 1993 was a milestone for the video game industry that spawned many sequels, as well as some controversy, and has become one of the most influential and popular video games in history. Eventually, the executives over in Hollywood got the idea to adapt the game onto the Silver Screen. So, Jim Bevan and I decided to take a look at the film. Jim: Thanks for having me here, Creature. Though I have to confess I’m coming into this partially blind. I never played the original DOOM or its sequels when it came out (at the time I was more of a console gamer and only really played adventure games on the PC). Even when I got older I never had much of an interest in it or related media, including the film version released in 2005. When Mathew Buck reviewed that version on Bad Movie Beatdown, my curiosity was piqued. I had to see if it was, as he put it, a guilty pleasure. I have to disagree with Mr. Buck, as the movie doesn’t even reach the level of ‘so bad it’s good’, at least not for me.

Indeed it can be “So Bad, It’s Good” (depending on the viewer.) So let’s dive into it.

Creature: In the year 2046, the Union Aerospace Corporation sends out a Distress signal from their Research Facility on Mars of a Quarantine Breach involving some unknown enemy force. A team of Eight Marines [The Rock, Karl Urban, and 6 others] are assigned to go up to the Red Planet to contain the facility, retrieve the scientists who sent the call, & neutralize the threat. As they go further in the base, they soon realize the threat might be more dangerous than they realize and try to stop it before it reaches Earth.

Jim: The movie starts off well enough setting the scene for the marines’ arrival on Mars and their first confrontation with the evil that’s infested the UAC facility, but then it falls apart. The biggest problem is how it ignores the source material. In the game, the monsters encountered have come from hell through an interdimensional rift created from a failed teleportation experiment. Here, the creatures are created by injecting humans with gene samples from the remains of an ancient Martian race. That’s not DOOM; that’s Resident Evil, along with dozens of other horror/sci-fi plots that revolve around monsters born of genetic tampering.

Aside from scrapping the game’s premise for something more cliched, the movie is dragged down by a number of glaring plot-holes. Just off the top of my head: the marine squadron, who should all be well-trained, make incredibly idiotic moves like splitting up into small groups and firing at anything that moves. The infection spreads, as Dr. Samantha Grimm exposits, by detecing the genetic marker for “evil” to find a new host, which is a stretch even for a fantasy. Every victim who becomes a carrier mutates into a hideous abomination, except for the designated hero John (because he’s pure or some such nonsense). Basically, the writers decided to treat genetic science as magic that could change as the plot depended on it, which would have been unnecessary if they’d just kept the hell aspect, since the effects could have been explained as truly supernatural.

Creature: I was Disappointed with the plot. They definitely went with some very idiotic decisions with it, especially the whole “Infection” idea.

Creature: Some of the casting choices for this seemed similar to an Action film. Karl Urban is Reaper and he’s supposedly the main character from the games (“The Doom Guy”). He basically seemed to be “Pure”, as Jim Mentioned, he didn’t have much of a motive to him and wasn’t a very good character to me.

Oddly, the Rock comes off more as a villian in the film. More so than the monsters. In D3, they had a villian who caused the demons to start spreading throughout the base, Dr. Betruger. In this, they threw the whole Demon aspect away and made the Rock seem more like a Leader who basically wanted every threat dead. (Which oddly reminded me of Sgt. Kelly from D3.)

Rosmund Pike plays Repaer’s Sister whose a Scientist working on Mars and provides nothing but exposition for what’s happen and how the infection is spreading.

The other soldiers came off as pretty generic. They didn’t have personalities to them and only exist to get killed off in the film. The only character that seemed a bit likable to me was Pinky.

Jim Bevan: Just about everyone in the cast played a stock character that you see in many generic action/horror films – the normally stoic, battle-hardened soldier who eventually goes crazy or becomes a puppet of the evil he’s fighting (Sarge), the scientists who succumb to their own monstrous creations (Dr. Carmack and Pinky), the ex-criminal seeking redemption, eventually sacrificing him/herself (Goat), the heroic white people who end up saving the day (the Grimm siblings), and so on.

It doesn’t really matter which actors ended up portraying them, since I feld the script was so weak that no matter who was in the part would have performed just as poorly considering the material they were given. None of the cast were memorable or interesting, just bland and cliched. When the protagonist from the DOOM tie-in comic is a more engaging character (“Now I’m radioactive! That can’t be good!), the writers and directors have failed.

Creature: Based on what I saw throughout the film, the “Demons”were mostly based on the designs from Doom 3. They only use Three of the demons that were in the game: The Hell Knight, Imps, & Pinky. [There was also Zombies but a lot of Games have those. Thus they didn’t really stand out to me like the others.] 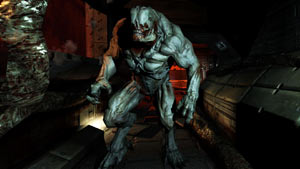 The designs for their movie counterparts seemed actually very accurate to D3 with a minor difference with Pinky having Wheels instead of mechanical legs. So, at least the film got that part right.

For the special effects, they were alright. They seemed to be regular CGI that you would see in these kind of films.

Jim: Pinky was the only creature I found truly impressive. The build, fusion of the wheelchair to its body as a reminder of the transformation it went through, and lack of eyes made it stand out. All the other monster designs seemed rather generic to me. I haven’t played DOOM 3 so I can’t say how they compare. I would have liked a little more variety than just three monster types; they could have been used in place of the generic zombies, though I suppose budget restrictions prevented that from happening

Creature: I definitely agree that they needed more monsters from the game. Personally I would have loved to see some Lost Souls or Cherubs running around the base.

Creature: Of course with this being a Video Game Movie, Changes were made, and being a very big fan of the video games they were very easy to notice. The obvious one, as Jim Mentioned, is that they are Demons but they are just humans who were experimented on…Okay, this basically ruined the whole idea and the atmosphere that the Games set up with its very Demonic and Graphic imagery. The movie also tried to be consistent with the lighting of the game especially since in the 3rd one, your flashlight is one of the most frequently used items to explore the Facility, but the problem is sometimes you can’t see very much of anything. Then there’s the First Person Scene…. 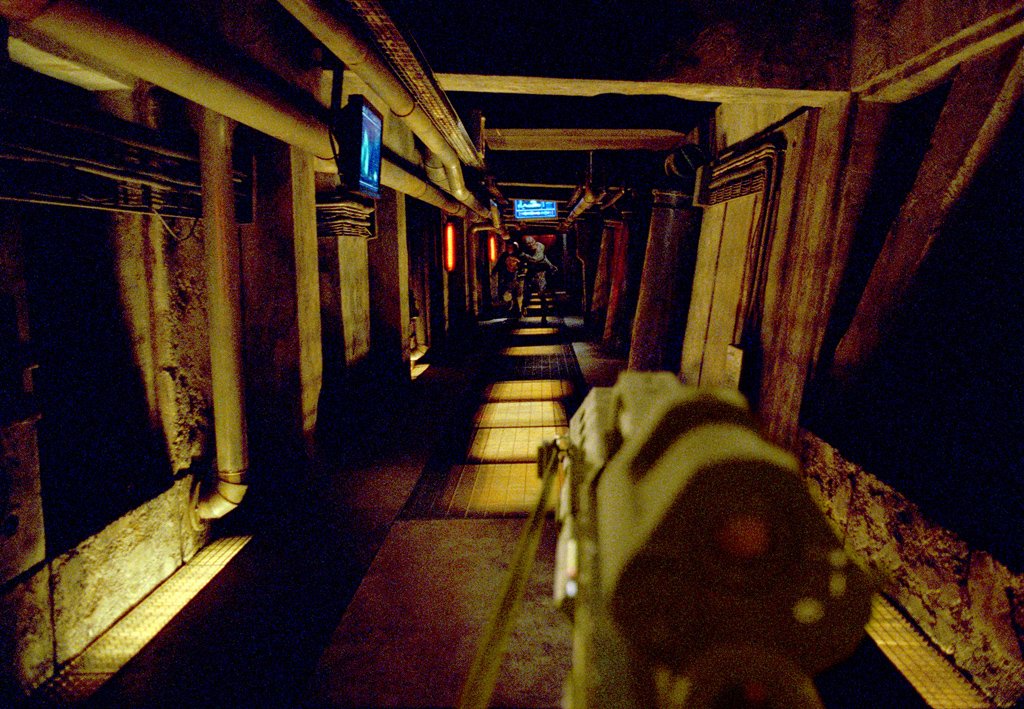 The scene was supposed to replicate playing the game in Rampage or Beserk mode, but it ended up looking like your watching a Walkthrough of the game on Youtube. For me, this doesn’t not even hold up well to the games.

Creature: I thought this was a dumb movie. Being a fan of the game, there were aspects of it that were disappointing, some choices I didn’t like, although it could come off as a Guilty Pleasure for fans of the games, Not for me though.

Jim Bevan: As I said before, I never played the games so I can’t judge them regarding how faithful they are to the source material. But as a film judged on its own merit, it’s just dull. I didn’t even get an ironic sense of entertainment from how poor it was. I was just bored. I will agree that some of the aspects they tried to bring over that you brought up, such as the lighting and the FPS segment, were good in theory but weak in execution.

Like you, I can’t say this is a guilty pleasure. It’s not horrible, but sometimes mediocrity is worse than outright badness.

Thanks for having me here, Creature.

The Creature: Thank for joining me in the Review.