We can all name terrible movies that were huge hits (and probably spawned a series), but you might be surprised to learn how often itâ€™s the other way around. All it really takes to rock the box office, letâ€™s face it, is a good marketing campaign, with a trailer promising more of what weâ€™ve flocked to in the past, so major filmmaking studios can get away with not sweating quality too much. (Grown Ups 2 ending up a major hit this year should speak for itself.) But when you have none of the above, as many up-and-coming talents and against-the-grain visionaries do not, your only chance at major success is usually to create something good enough to draw attention to itself. Most movies made in these conditions donâ€™t catch on, but not because they were failed attempts.

Itâ€™s true, many impressive movies are buried in obscurity each year, underneath such hits as Texas Chainsaw 3D, G.I Joe: Retaliation, and The Smurfs 2.Â And itâ€™s not just a list of award-baiting art house films either. Some of the best action, comedy, animation, or horror of its kind is in movies that no one has heard of. In this series, weâ€™ll be giving them just a little of the attention theyâ€™ve been denied and see what weâ€™ve been missing. This week, hereâ€™s Worldâ€™s Greatest Dad (2009)

The background: Robin Williams has long been making his infamous attempts to merge his comedic and dramatic abilities and play the lead in an Oscar-worthy product, with writing and direction that resulted in such mawkish features as Patch Adams and Bicentennial Man. Even the legendary Francis Ford Coppola in the directorâ€™s chair only led to the underwhelming Jack.

The one to finally get it right in this sincerely dark satire of celebrity cults seemed an unlikely choice, especially considering that he only had a couple outings as a director under his belt. Director Bobcat Goldthwait, an old friend of Williams, was once trying to â€œmake it bigâ€ himself, using the screen persona of a screaming doofus in various supporting roles, which his dark standup would suggest is not his first choice of comedy. But since his turn as a small-time movie director, heâ€™s developed a new philosophy;

â€œI really just want to make movies. I donâ€™t want to be famous for even making them. I just really like telling my little stories.â€

Nowadays, most people would say that both Williams and Goldthwait have peaked. Those people have not seen Worldâ€™s Greatest Dad.

The movie: â€œMy name is Lance Clayton. My biggest fear in life is that Iâ€™m going to end up all alone.â€

Lance (Williams) dreams of being a beloved author, but heâ€™s more than a little underappreciated. Heâ€™s a single parent teaching the poetry course in the high school his son attends, where his handful of students remain lazy and clueless, despite his attempts to inspire them. His girlfriend Claire (Alexie Gilmore) hardly bothers disguising her interest in a younger and more successful teacher in the school.

Meanwhile, his son Kyle (Daryl Sabara of Spy Kids fame) is a despicable human being from every angle, a punk and a pervert who would also be a bully if he werenâ€™t so lazy. Lance tries every day to bond with him, only to be mocked and disrespected. Kyleâ€™s only friend, a bright but meek innocent named Andrew (Even Martin), might really be more of a victim. Lance resorts to everything from supportive parenting to threats, but a correctional facility seems inevitable.

One night, Lance comes home to find that Kyle has crossed a line and done something I canâ€™t bring myself to spoil, more horrific than can ever be undone. But Lance loves his son in spite of everything and decides to cover for him with a forged note, hoping to at least preserve his dignity. But when someone gets their hands on this note and publishes it in the school paper, it does something Lance did not intend: Kyle becomes a beloved celebrity, gaining a following that slowly reaches a national level. And when Lance is hailed as a heroic father, he canâ€™t help starting to like it and even encouraging it just a little.

The world makes it too easy, as Goldthwait demonstrates through heavy satirical punches. A girl whose only contact with Kyle involved flipping him the bird now writes soliloquies to him, expressing her love. Total strangers claiming to be his friends approach Lance to ask for keepsakes. Claire, meanwhile, now fondly thinks of Kyle as â€œa sweet boy,â€ though she does deserve credit for taking his invasive questions about her sex life with Lance in stride. Only Kyleâ€™s real friend, Andrew, seems to suspect the truth, questioning Lance at every turn. But Lance keeps his secret with a vengeance, using Kyleâ€™s cult as much as anyone to fill his innate needs. And sure enough, with the wheels already in motion, Lance starts to realize that this whole thing is becoming something he doesnâ€™t like or even condone. This is the type of thing can’t end without somebody getting hurt.

The stars: There are points in the movie where Robin Williams demonstrates that drama may be his true talent after all. His character is a soft-spoken and thoughtful man, and what comedy comes from him is achieved through wry humor and under-reactions. But his most dramatic portions, including the discovery of Kyleâ€™s mistake and the final confrontation with the cult, are full force moments that Williams all but nails. The other standout performance is from Daryl Sabara, who is sickeningly good as a disgusting punk. Tom Kenny, known for voicing Spongebob Squarepants, also makes an amusing cameo, as a talk show host promoting the journal that Kyle â€œwrote.â€

The director: Bobcat Goldthwait never got his hands on any star vehicles as an actor, until 1992, when he managed to sell a movie he wrote himself. Upon securing the deal, he directed and starred in the star-studded Shakes the Clown, a dark satire of the comedic business about a depressed birthday clown framed for murder. While The Boston Globeâ€™s Betsy Sherman called it â€œthe Citizen Kane of alcoholic clown movies,â€ it more or less wound up as a critical and commercial failure.

This seemed to signal the end of Goldthwaitâ€™s career, with his supporting roles becoming less prominent and farther between. Few could have guessed that it foreshadowed a surprising new direction for him. When Worldâ€™s Greatest Dad premiered at the Sundance Film Festival, it was a unanimous hit, with critic Paul Fischer even naming it â€œone of the best movies of the year.â€ However, the buzz surrounding it wasnâ€™t quite strong enough. It received a â€œlimitedâ€ theatrical release â€“ what distributors give to smaller productions, just in case there are viewers who donâ€™t notice anything else playing that they want to see â€“ sending it to a limited number of theaters with a limited number of show times, through which it grossed a paltry $300,000. This, however, is no discouragement to Goldthwait:

â€œWhen I write stuff at this point in my life, I really don’t want to think, â€˜Can I get this made?â€™ I just write the stuff that comes out of me, and then after that I try to get it made. But I don’t think, â€˜Will I get the money?â€™ and â€˜Who’s this made for?â€™â€

His next project in development is perhaps his most surprising new direction yet: A family film. In the meantime, also look for his latest movie God Bless America (2011), if youâ€™re in the mood for a furious cathartic attack on the media and its dropping standards

(Iâ€™m open to suggestions, so let me know if any of you have an idea for the next one I should cover.) 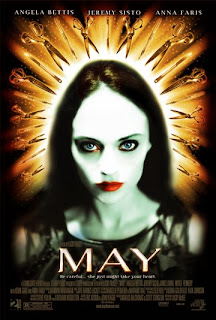