Season 8, Part 3
Season 8, Episode 13
The One Where Chandler Takes a Bath
Â 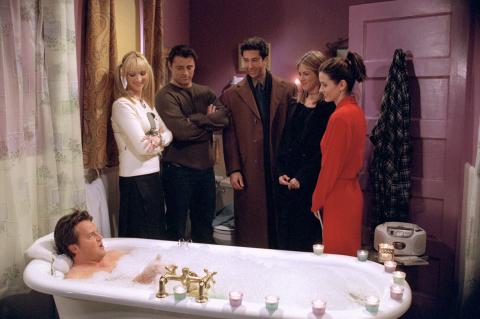 Plot Summary-Chandler discovers the joy of bathing; Ross and Rachel argue of potential baby names, Joey tries to dismiss his feelings for Rachel
Funniest Line-â€œOh, I’m sorry, are we having an 89 year old?â€â€¦.Rachel
Nitpick of the episode-So many argue that while Chandler states he hates baths, he was taking a bath with Monica back in season 5. Well, give one to the creators they do clear this up when Chandler explains clearly that it wasnâ€™t the bath he enjoyed but the wet naked lady.
Standout Character-Joey, the reason why the â€œJoey loves Rachelâ€ stuff works is all in how the character deals with it. He doesnâ€™t embrace it at all; he knows itâ€™swrong but decides itâ€™s out of his control. Handled very nicely.
Syndication Edit-Scene Extensions
FinalThoughts-After teasing last time I will talk about the Joey/Rachel stuff. It works in the beginning because of how itâ€™s handled. I can buy that Joey suddenly has these feelings. What screws it up is how they stretch it out later, but we will talk more about that as we go. Itâ€™s the strong acting by LeBlanc that sells the scenario. The baby name stuff with Ross and Rachel is realty good here. Lots of laughs. What isnâ€™t good is that stupid Chandler story. Yeah, watching him sit in a bath really makes me laugh. To be fair that last scene in the bathroom with the gang where Ross and Rachel announce the babyâ€™s sex was really good and the opening talk Joey has with Chandler. Phoebe is basically just here to pad the episode out.
Grade=B-
Season 8, Episode 14
The One with the Secret Closet
Â

Plot Summary-Monica wonâ€™t let Chandler see inside her closet. Phoebe convinces Monica to let her massage her, and then regrets it. Joey comes to a hard decision about Ross and Rachel.
Funniest Line-â€œHow would you feel if you couldn’t share your cooking? Or, or imagine how Ross would feel if he couldn’t teach us about dragons.â€â€¦.Phoebe
Nitpick of the episode-Canâ€™t let this one pass. The buildup of the closet seems silly when you realize how many times we saw inside of it back in the early days of the show.
Standout Character-Joey, I hate to do it two episodes in a row but he is just about perfect here
Syndication Edit-Longer opening, Joey telling Ross the baby kicked, the scene where Joey suggests Rachel move out is longer
Final Thoughts-Chandler redeems himself from the previous episode; he is really good in this. Unfortunately Monica does not. That was the best they could do with the closet? Make it a place where Monica stashes garbage that she doesnâ€™t knowwhat to do with? And the stuff with the massage, well, letâ€™s just say Phoebe isnâ€™t the only one who is uncomfortable. And Phoebe has more than enough right to be angry in the start. One of my favorite exchanges comes when Chandler asks Joey how his hideously inappropriate crush on Rachel is going. The great part of the episode is the Joey/Ross/Rachel stuff which is top notch here. The fact that Joey would suggest Rachel moving out when you know it must be killing him inside is just such a very well-crafted moment.
Grade=B
Season 8, Episode 15
The One with the Birthing Video
Â

Plot Summary-Chandler accidentally watches a birthing video intended for Rachel,Ross tries to figure out how to tell Mona he is living with Rachel, Joey needs cheering up
Funniest Line-All right, big brother. Which of these do you think would make your little sister look hotter, so your best friend would want to do her?â€â€¦.Monica
Nitpick of the episode-Mona breaks up with Ross. About time! How could she not have broken up with him sooner with everything going on, something Ross says himself!
Standout Character-Chandler, his reactions to the birth video are classic
Syndication Edit-The opening scene with Ross and Rachel discussing living together
Final Thoughts-Another good Chandler episode with the birthing video. While I canâ€™t speak from experience I would imagine that would be hard to watch. As I said itâ€™s about time Mona dumped Ross. I guess she really did like him but the situation with Rachel should have been a deal breaker. Rachel kind of bounces around the two stories in this one but watching her watch the video was also funny. The stuff with Phoebe and Joey kind of feels like filler, it was clear they had that last scene between Joey and Ross in mind but needed something for him to do before that. And by the way, that last scene is fantastic! The whole conversation with Ross and Joey leading to that final moment when Joey reveals itâ€™s in fact Rachel he has feelings for. Itâ€™s a powerful moment and how David Schwimmer can manage an effective stunned reaction so well with his back to the camera is beyond me.
Grade=B+
Season 8, Episode 16
The One Where Joey Tells Rachel
Â

Plot Summary-Ross tries to come to grips with Joeyâ€™s revelation, Joey decides he has to tell Rachel; Phoebe meets Monicaâ€™s soul mate
Funniest Line-â€œOh my God, I have to tell her! I haven’t even thought about what I willsay. What should I say?â€â€¦.Joey
Nitpick of the episode-Ok, what was the point of that annoying busboy during that heavy scene with Joey and Rachel? It disrupts the whole scene and isnâ€™t even funny!You donâ€™t always have to jam a joke in guys!!!
Standout Character-Rachel; she handles Joeyâ€™s news with enormous class and respect
Syndication Edit-More of the busboy believe it or not, also a scene with Chandler feeling Rachelâ€™s belly
Final Thoughts-Well here we are, the episode we had been anticipating. I am happy to say it did not disappoint, entirely anyway. There is a lot of good in here. The opening scene with Rossâ€™s reaction to Joey, the scene between Monica and Ross in the beginning, the scene with Joey and Ross later on, and of course the dinner scene with Joey and Rachel. All very strong moments. In fact the whole thing is done so well and given so much weight, you can tell the creators really worked on this one. Itâ€™s important that we not hate either character at the end. Just a very strong scene and thankfully they didnâ€™t give in to clichÃ© to make Rachel suddenly love him (yet!). The weak part is the other story with Monicaâ€™s soul mate. Itâ€™s not so much bad as it is a distraction from the rest of the episode. Itâ€™s stupid too because we know thereâ€™s no way that Monica and Chandler are separating.
Grade=A-
Season 8, Episode 17
The One with the Tea Leaves
Â

Plot Summary-Rachel lies to Joey to get him to talk to her again, Phoebe dates a man her tea leaves suggested would be the one, Monica and Chandler organize their CDâ€™s. Ross tries to retrieve a shirt from Monaâ€™s.
Funniest Line-â€œI’m not great at the advice. Can I interest you in a sarcastic comment?â€â€¦.Chandler
Nitpick of the episode-If Mona knew she had Rossâ€™s shirt then why didnâ€™t she return it to him? And really Rachel, youâ€™re boss wants to buy your baby was the best you could come up with??
Standout Character-Ross, once again makes the most of a silly story
Syndication Edit-Rachel saying being told about Joeyâ€™s feelings in advance would have been nice
Final Thoughts-While I was glad that they followed up on the events from the previous episode I wish they had done it differently. I would have preferred a more serious talk between Rachel and Joey than having Rachel lie to him. To be fair the scene where Joey appears at her bossâ€™s office was hysterical! TheChandler/Monica story is the epitome of filler here. Phoebeâ€™s story isnâ€™t bad,it does seem like she has had nothing to do for the majority of the season. It was almost a pointless story actually, until Alec Baldwin comes in at the end.Yeah that will ultimately go nowhere too, but more on that in the next episode.Finally, what was the point of the Ross story exactly? The Mona arc ended, we didnâ€™t need even more closure! Sometimes on this show the creators donâ€™t knowwhen to let a story line end.
Grade=C+,episode feels deflated somehow
Season 8, Episode 18
The One in Massapequa
Â

Plot Summary-Everyone goes to Long Island for the Gellerâ€™s 35th anniversary, Phoebeâ€™s new boyfriend is annoyingly positive, Monica is determined to make her parents cry with her toast
Funniest Line-â€œNo, I’m a positive person. You are like Santa Claus. On Prozac. At DisneyLand. Getting laid!â€â€¦..Phoebe
Nitpick of the episode-What the heck Monica? Why is it your mission to make your parents cry? And how could you be soooo bad at it! I mean, bringing up a dead dog??? How about just speaking from the heart and saying some nice words about themâ€¦.like Ross did!!
Standout Character-Phoebe, at least she gives the guy a shot before dumping him
Syndication Edit-Phoebe getting picked up by Parker to go to Monicaâ€™s
Final Thoughts-It appeared from the tease last episode that Alec Baldwin would be a long term relationship. Instead we get another annoying boyfriend of the week. Not saying Baldwin did a bad job, but I think itâ€™s time Phoebe broadened her dating horizons. Despite my griping this is a really good episode. I donâ€™t know what Monica was thinking, but her failure is fun to watch, especially when Chandlercovers his ears so he canâ€™t hear anything. We finally stir up the Ross & Rachel stuff a bit which is always fun.
Grade=B+
That’s all I’ve got today, come back later this week as we finish with the Emmy Award winning Season 8!

Alicia the Punchcat, Ep. 4: “The Cat Girl on a Hot Tin Roof”

Alicia the Punchcat, Ep. 4: “The Cat Girl on a Hot Tin Roof”

Jan 21, 2021 James Faraci The Last Of The Americans
Blogs Uncategorized