Season 7, Part 4
Season 7, Episode 19
The One with Ross and Monicaâ€™s Cousin

Plot Summary-Ross is attracted to his cousin (I already lost you, havenâ€™t I?), Joey auditions for a movie role which requires him to naked, Phoebe and Rachel throw Monica a spot bridal shower
Funniest Line-â€œSay something clever. Okay, doesn’t have to be clever. Just has to be words. Say some words. Any words will do. Oh, my God, this is the longest that anyone has not talked ever! There is nothing you could say to make this worse so just say something!â€â€¦..Ross
Nitpick of the episode-Nice of Rachel and Phoebe to forget to throw Monica a bridal shower! I could complain Chandler never got a bachelor party, but the serieswill take care of that one next season
Standout Character-Ross, not easy to be funny and creepy at the same time!
Syndication Edit-Scene Extensions
Final Thoughts-It never bodes well when a show has to resort to a stunt to get peopleâ€™s attention. Thatâ€™s what Joeyâ€™s story is, itâ€™s all setup for that last gag at the audition with the silly putty. Itâ€™s funny but when a story is all set up for a joke it leaves the rest kind of empty. The bridal shower story seemed silly, why go the extra step of making Phoebe and Rachel forget all about it? Thankfully by the time Phoebe has her bridal shower the writing would be a little more creative. Rossâ€™s storyâ€¦.what can I say about Rossâ€™s story? The scene where he thinks to himself while his cousin stares at him waiting for an explanation is kind of funny, but on the whole the concept is just creepy. I guess it does help that they established Ross has not been with anyone in awhile. And of course Chandler is once again all but absent.
Grade=B-,funny but lacks substance
Season 7, Episode 20
The One with Rachelâ€™s Big Kiss
Â

Plot Summary-Rachel meets up with an old friend, Chandler and Ross argue over a tuxedo, Joey drives Monica crazy with requests
Funniest Line-â€œRoss is Batman!â€â€¦..Chandler, and the response is great-â€œWell, he did manage to keep his identity a secret for a long time.â€â€¦.MonicaÂ  (I usually donâ€™t do two at once but this was one of my favorites ever!)
Nitpickof the episode-Why does it matter if Ross or Chandler wears a celebrity tuxedo? Whoâ€™s going to know, unless they wear a sign?
Standout Character-Rachel, who else could get it be in this one?
Syndication Edit-Chandler trying on the tuxedo, which is to small
Final Thoughts-Once again, when you have a story building up to one gag in the end,the gag better be funny. It is, but the journey to get there is boring. As soon as we hear about Rachelâ€™s kiss in college we know it will end up with another kiss. Also more stunt casting, and why was Winona Ryder cast exactly? Just because Will & Grace loved doing the celebrity of the week doesnâ€™t mean Friends had to also. However I am being hard on this one because itâ€™s actuallya decent episode compared to the others. There are some genuine laughs in all the stories especially the whole tuxedo business not to mention Joeyâ€™s pestering of Monica.
Grade=B+,decent episode
Season 7, Episode 21
The One with the Vows
Â

Plot Summary- Monica and Chandler need help making up their vowsÂ  (yep, thatâ€™s it)
Funnies tLine-â€œDo you realize that we’re getting married in just four weeks? Four weeks,baby. Four weeks!â€â€¦.Monica
Nitpickof the episode-You know, you donâ€™t HAVE to recite vows! Just saying…..
Standout Character-ummmmâ€¦â€¦..
Syndication Edit-More clips
Final Thoughts-A clip show. Yawn. This starts out as a decent one because we see how Monica and Chandler started off. That is kind of fun. But the second half ofthe episode is basically Season 5, especially â€œThe One Where Everyone Finds Outâ€, edited down to ten minutes! Boring.
Grade=C
Season 7, Episode 22
The One with Chandlerâ€™s Dad

Plot Summary-Ross and Rachel drive Monicaâ€™s Porsche, Monica convinces Chandler to see his dad, Joey discovers Phoebeâ€™s guy is wearing ladies panties
Funniest Line-â€œYou do not want him there. No one’s going to be looking at the bride when the father of the groom is wearing a backless dress.â€â€¦.Chandler
Nitpick of the episode-Ross is ridiculous in this episode, why is he always screaming and acting so nuts? And letâ€™s not even get into what he does in the end of the episode. He has really changed since the start of the series from the sweet lovable guy to a screaming dufus, but maybe it will get better next season.
Standout Character-Chandler, it is about time he patched things up with his Dad
Syndication Edit-Chandler explaining why he didnâ€™t invite his father
Final Thoughts-Well folks, here it is. The low point. Not for the season, the whole series! It just doesnâ€™t get any worse than this one. Ross flirting with a male cop to get out of a speeding ticket? Stupid. Joey wearing womenâ€™s panties? Stupid. And even the Chandler story isnâ€™t as good as it could have been.However, to be fair the scene between him and his father isnâ€™t really bad.While they could have done more with it, as it is the scene works. That is why I am not giving this episode a flat out F as a grade. But Ross flirting with a cop is just lame, to be honest it’s not the worst story the series will throw at (and yes we will get to that) but there is just something so off in this episode that the whole thing just stinks.Â  I am not sure what happened with season 7, but I guess it suffered from the same fate many shows do and got stale. If only something unexpected would happen to shake things upand get things good againâ€¦â€¦â€¦â€¦
Grade=D+,awful
Season 7, Episode 23 & 24
The One with Chandler and Monicaâ€™s Wedding
Â 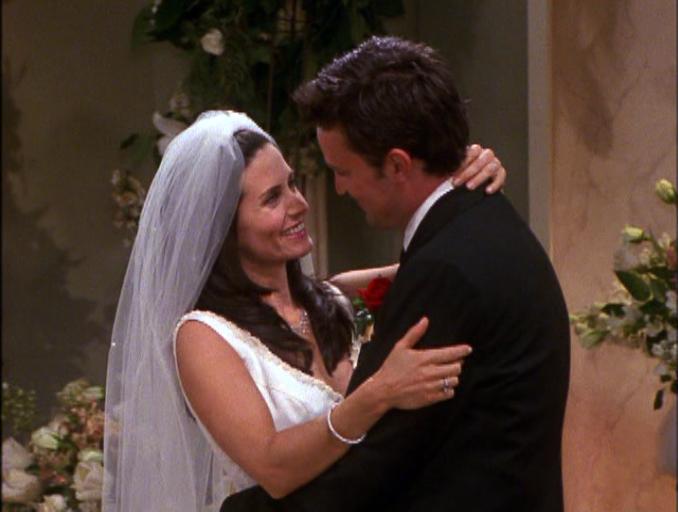 Plot Summary-Monica and Chandler prepare to get married, Chandler freaks out and runs away, Joey is stuck making a movie
Funniest Line-â€œI’ve never walked down the aisle knowing it can’t end in divorceâ€â€¦.Ross
Nitpick of the episode-Did we really need Joey delayed by filming his movie? It just comes off as unnecessary padding especially when the other guy is drunk for no reason. I find it hard to believe they would keep filming the way the actor was so drunk. Oh, and I would have laughed at Ross to in that opening scene, what was he thinking with that â€œbig brotherâ€ speech? Â And the stuff about the pregnancy test was a tad contrived, but Iâ€™ll let it go.
Standout Character-Chandler, itâ€™s about time he freaked out and the episode handles it very well. The best part is the end when he realizes having a baby isnâ€™t so scary. I am even on his side when he Phoebe and Ross are about to complain about his smoking and Chandler asks them to focus on the big picture.
Syndication Edit-Rossâ€™s botched joke during his toast. A scene with Ross and Phoebe discussing where Chandler could have gone
Final Thoughts-Despite the drek of the last few episodes, this is a really great episode. Chandler and Monicaâ€™s wedding is a big deal and the episode treats it as such. It was about time Chandler acted like, well, Chandler and the whole thing is well done. In fact I was surprised at just how much weight they gave to Chandlerâ€™s running off. This was no normal dilemma, this was serious! The only other story really is Joeyâ€™s which is kind of pointless, and more stunt casting with Gary Oldman as the other actor. Why? But that doesnâ€™t take awayfrom the episode. The ceremony does not disappoint, I would almost dare to call it a perfect scene. They even get a few laughs in there which isnâ€™t always easy during a wedding scene. My favorite part of the episode is all the callbacks to previous episodes or jokes including the freebie list, Rossâ€™s version of giving the finger, and Chandlerâ€™s smoking. This almost feels like a series finale rather than just a season finale. The guest stars also shine, and itâ€™s nice to have Morgan Fairchild back. And the cliffhanger was very surprising, as we find out itâ€™s actually Rachel who is pregnant. Who? How? When? Lots of questions for Season 8 to answer, and we will take a look at that next week. For now letâ€™s be happy that Season 7 is over with!
Grade=A,very strong end to a very weak season
Thatâ€™sit for now, next week we will dive into the Emmy award winning season 8. Will the series improve? Spoilers-YES!!!!!!!!!!
Share on Social Media
twitterfacebooktumblrredditemail
Follow us on Social Media
twitterfacebookyoutubetiktok