Plot Summary-Phoebe takes a job as a telemarketer, Rachel destroys Joeyâ€™s chair, and Monica thinks her parents love Ross more than her
FunniestLine-â€œAre you kidding? I get a Porsche and the Barcalounger’s gone? This is the best day ever!â€â€¦.Monica
Nitpickof the episode-Amazing; Jason Alexander created a character who is an even bigger loser than his character on Seinfeld! I also donâ€™t buy the â€œno one in the office knows he existsâ€ gag, it feels forced. And what exactly is stopping the guy from quitting?
Standout Character-Monica, about time her parent issues came out a little bit(although having it be with her mother would have made more sense)
Syndication Edit-This episode was 40 minutes long to compete with Survivor. As a result there are lots of scene missing or trimmed. There’s an extra scene at the coffee house where Ross calls his parents, and another one at Joey’s place with Rachel and Chandler, where they argue about who gets the La-Z-Boy.
Final Thoughts-What do you do when you are out of ideas? Get a big named guest star and make a story about him! In all fairness itâ€™s not a terrible Phoebe story,but why does the character played by Jason Alexander get the focus?Â  You know what would be worst, centering a story on Joeyâ€™s armchair. Oh wait, they did that! The only redeeming part ofthis episode is the Ross/Monica story; itâ€™s good to see the way Monica feels about her parents finally coming out!
Grade=C+,about as average as you can get
Season 7, Episode 14
The One Where They All Turn 30
Â

Plot Summary-Rachel is upset about turning 30 which triggers memories of when the others reached the big 3-0
Funniest Line-â€œWhy, God, why?! We had a deal, let the others grow old, not me!â€â€¦..Joey
Nitpick of the episode-Yeah I could argue that the time frames are off and that the characters should have turned 30 before the periods indicated, but sometimes you just have to take what you get and enjoy
Standout Character-Rachel, the reason she breaks up with Tag shows real maturity for her character which will be explored more next season
Syndication Edit-Another expanded episode, so lots of stuff
Final Thoughts-I loved this one, which says a lot in this season, as it really benefits from the expanded format. I mean sure the birthdayâ€™s shown in the flashbacks are goofy. Why Monica would get drunk like that is beyond me, and typical Ross hijinks with that car. At least Phoebeâ€™s story has some substance to it, including a kiss with Joey thatâ€™s sweet but goes nowhere. All in all this is a really decent character episode especially for Rachel. I complained alot about the breakups on this show, but this one is handled very nicely.Rachel simply realizes she is past the point where she can just have fun, and itâ€™s a nice moment. Of course the best part of the episode is Joey crying to the heavens â€œWhy god why??â€ Who doesnâ€™t feel like screaming that at some point in their life?
Grade=A-,a fantastic premise handled great!
Season 7, Episode 15
The One with Joeyâ€™s New Brain
Â

Plot Summary-Ross plans a surprise for Chandler and Monicaâ€™s wedding, Phoebe and Rachel fight over a lost phone, Joey discovers he is replacing a popular character on Days
Funniest Line-â€œWhy is your family Ross?!â€â€¦.Chandler
Nitpick of the episode-Bagpipes????? Really???? For heavenâ€™s sake Ross itâ€™s a wedding not a military funeral!Â  Why not just play the keyboard?
Standout Character-Joey, only person who really has anything to do here (that isnâ€™t stupid) and his scenes with Jessica are played very well
Syndication Edit-Once again this episode was extended to 40 minutes so there is lots of stuff cut out of the syndicated re-run
Final Thoughts-More stunt casting, this time we get Susan Sarandon. This is a bit better, of course Susan Sarandon is a pro and it shows. The rest of the episode is dull. The argument Phoebe and Rachel have is silly and why Ross would decide to play bagpipes boggles the mind. Ok, fair is fair and as dumb as it is that last scene where Ross is playing and Phoebe sings along is pretty funny. But you gotta get through a lot to get to that last scene. Donâ€™t believe that they had run out of ideas? Joey has to step in to help Jessica deal with a tough time two episodes after Phoebe had to help the guy at the office who was going through a tough time!!
Grade=C
Season 7, Episode 16
The One with the Truth About London
Â 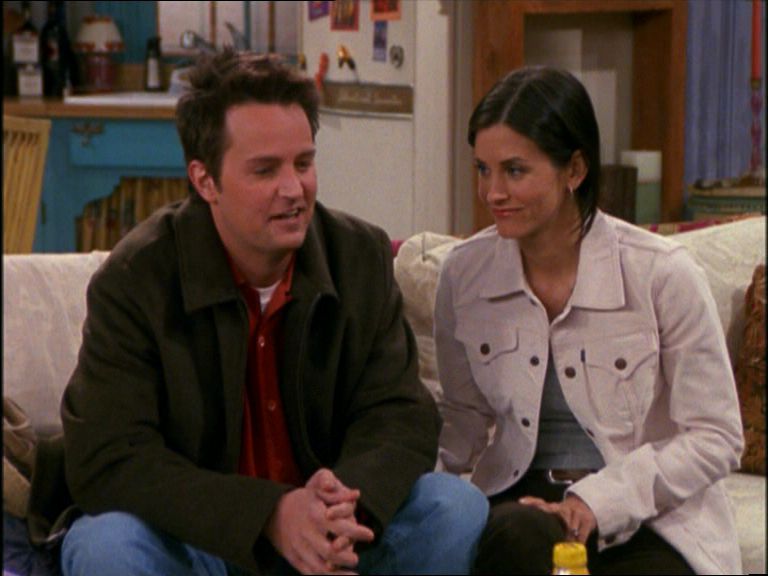 Plot Summary-Monica and Chandler reveal how they hooked up in London, Rachel bonds with Ben while Joey gets ordained as a minister.
FunniestLine-â€œYou wanted to sleep with Batman, and instead you ended up with Robin!â€â€¦.Chandler
Nitpick of the episode-Talk about stretching a story to fit an episode. The look back at London was great but they needed something to drag it out, so we get Chandler whining that Monica was looking for Joey. Ummm, in the end what difference does that make really? Glad he figures that out by the end.
Standout Character-Rachel, nice to see someone bonding with Ben and if I didnâ€™t know better I would think it was foreshadowing for next season
Syndication Edit-Phoebe’s entire story line, where she thinks that she has side effects from headache pills, is cut out thank goodness since the story makes her an annoying hypochondriac
Final Thoughts-When I first heard that Joey was going to do the ceremony I thought it sounded idiotic. But, they make it work. Of course the real drama in the episode is the truth about London, which as I already said is blown out of proportion by Chandler. I love the Rachel story, so nice to see Ben be a partof the plot and having Rachel bonding with him was great! The end where Ross and Ben get Rachel back with their own prank was a great, great moment! Not only was it funny but we see Ross spending real time with his son rather than having Ben be the five second cameo he usually is. I already talked about that final scene with Joey as Monicaâ€™s boyfriend in another article, so I will spare you the same speech about that rather odd WTF ending.
Grade=B-
Season 7, Episode 17
The One with the Cheap Wedding Dress
Â

Plot Summary-Monica battles for her wedding dress; Joey and Ross discover they are dating the same girl
Funniest Line-â€œJoe when itâ€™s one oâ€™clock in the morning and you donâ€™t come byâ€¦thatâ€™s okâ€â€¦.Chandler
Nitpick of the episode-It was such a big deal a few episodes ago for Monica to not get a custom made wedding dress, and here she is basically buying off the rack. Iknow there is not as much money, but stillâ€¦..
Standout Character-Monica, Now this is the Monica we expect, tackling the woman to get the dress she wants! And then she gives it up to get Chandler the band he wantedâ€¦.awww
Syndication Edit-At the end of the scene with Ross and Joey at the restaurant, Joey (orMatt LeBlanc) uses a very dirty word which would never have made it on TV. It made it on the DVD however.
Final Thoughts-The Joey/Ross story is pretty good, especially that last scene in the restaurant where Ross and Joey compare embarrassing details about each other.Itâ€™s really funny even including a call back to when Joey was the poster childfor VD and a Marcel reference! Phoebe and Rachel are here to fill Monicaâ€™s story and why is Rachel such a wimp? The conflict seems forced with the woman threatening to book the band they want if she doesnâ€™t get the dress. I mean,whatâ€™s so special about this particular dress? And wouldn’t any swing band do? All in all, not the worst episode.
Grade=B-
Season 7, Episode 18
The One with Joeyâ€™s Award
Â

Plot Summary-Joey gets nominated for a soap award, One of Rossâ€™s studentâ€™s claims he failed because he was in love with Ross, Monica starts to freak about getting never having any â€œfirstsâ€ again
Funniest Line-â€œI just like him so much that I feel like I’ve had ten drinks today. And I’ve only had six!â€â€¦.Phoebe
Nitpick of the episode-The idea of Joey being upset at losing the award was good, too bad the episode does almost nothing with it! I feel I have to point out itâ€™s around here that Matthew Perry missed several episodes due to pain pill addiction again. He still appears in the episodes due to his scenes being taped in advance but the shows are oddly paced due to his absence.
Standout Character-Phoebe, she is adorable in the tag
Syndication Edit-There’s extra scenes at the beginning of the show in the coffee house,with Rachel talking about Monica’s cake and an extra scene where the second student tries to kiss Ross
Final Thoughts-I never understood why Mackenzie Westmore and Allison Sweeney didnâ€™t just play themselves in this episode. Anyway, letâ€™s talk about this one. Itâ€™s boring! Monicaâ€™s dilemma feels like rehash to her season 5 dilemma when she realized she and Chandler were not hot anymore. Rossâ€™s story is rehash from the end of last season, which even gets a reference. They just changed it so that rather than date the student Ross is appalled. And as I said the Joey story wasaÂ  good idea but they didnâ€™t really do anything with it. Chandler appears in all of two scenes and looks terrible, he does manage to get a laugh at the end.
Grade=C-
Later this week we will conclude Season 7. Could it get worst?
Share on Social Media
twitterfacebooktumblrredditemail
Follow us on Social Media
twitterfacebookyoutubetiktok