Plot Summary-Rachel and Phoebe convince Joey to continue dating a girl they like, Ross discovers that people are having sex near his thesis in the library, Janice returnsâ€¦.enough said.
Funniest Line-â€œHi, I was wondering, is it possible to increase security in the Paleontology section? I wrote a book that’s up there, and instead of reading it people are… well, they’re rolling around in front of it.â€â€¦.Ross
Nitpick of the episode-While they did a good job with Janice here, I canâ€™t help but feel they could have gone even further with her finding out Chandler is engaged. I donâ€™t often make comments like this, but I hated Rachelâ€™s short hair in this and the next several episodes. From what I read, so did Jennifer Aniston.
Standout Character-Joey, always nice to see there is a real person in there
Syndication Edit-The first scene with Janice was a bit longer, I think Joeyâ€™s reaction toseeing Janice was cut but I could be wrong
Final Thoughts-Well after not seeing her last season (voice over aside), Janice returns in her full glory this season. You knew she had to have feelings about Chandler being engaged to Monica, and overall this episode handles that verywell. The story about Rachel and Phoebe talking Joey into continuing to date awoman they like is good, but the cop out in having her be just as shallow as Joey was weak. Rossâ€™s story is stupid, but ends up having the biggest laugh inthe episode.
Grade=B-,always fun to have Janice back
Season 7, Episode 8
The One Where Chandler Doesnâ€™t Like Dogs
Â

Plot Summary-Chandler reveals he doesnâ€™t like dogs after Phoebe reveals she has had one in her room, Rachel finally admits her feelings to Tag. Ross tries to solve a new game Chandler discovered.
Funniest Line-â€œHow is New England not a state? Huh? They have a sports team!â€â€¦..Joey
Nitpick of the episode-I donâ€™t believe for a second Ross couldnâ€™t figure out all 50 states by the end of the episode. Also the creators keep tacking on more stupid character traits added for no reason. Chandler is suddenly afraid of dogs and Ross hates ice cream which we have clearly seen him eat!!!! One last thing, it it is possible to hate or even fear dogs, maybe he was a paper boy who got barked at and chsased all the time, er, never mindÂ

Standout Character-Rachel, she is the only who has anything decent to do, it is nice to see her thing with Tag move forward finally
Syndication Edit- There’s one extra scene where Chandler wears the pink sweater so Monica will move the dog to Ross’s place. Also a scene where Chandler goes to Rossâ€™sto get the dog back.
Final Thoughts-Yeah, this is not my favorite Thanksgiving episode. Not the worst either, weâ€™ll get to that, but this one just feels like filler. Finally we see the whole Rachel/Tag arc advance a bit but by know I had lost interest. Therest of the episode is just dull filler which goes nowhere. Chandler hates dogs?Since when? Rossâ€™s inability to figure out the state game is funny in the start but gets old. He really should have figured it out eventually. I will admit that Joeyâ€™s mistaken states were kind of clever.
Grade=C+,disappointing as far as Thanksgiving episodes go (not the worst either)
Season 7, Episode 9
The One with all the Candy
Â 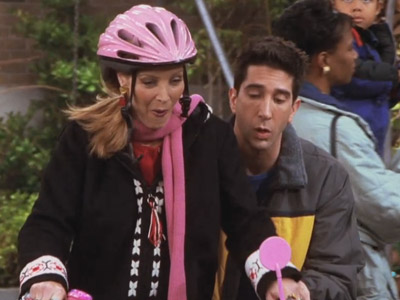 Plot Summary-Ross decides Phoebe should learn how to ride a bike, Monica decides to make candy for the people in the building, and Rachel almost gets into trouble at work with a mock review of Tag
Funniest Line-â€œUm, I said I thought you were a good kisser, and uh, and that I like your teeny-tiny tushy.â€â€¦.Rachel
Nitpick of the episode-Oh lord, that horrible bike story! WTF? Why dumb down Phoebe like that? Wouldnâ€™t it have been better to make Ben the focus? Maybe we see Ross try to teach Ben how to ride and have doubts in his parenting skills(funny how that new father anxiety faded right after he was born) or maybe even mess up? Then you have Phoebe step in to boost his ego back. Weâ€™d have gotten a strong character episode with Ross still learning to be a good father and Phoebe being a great friend to Ross and even honorary aunt to Ben. But Nooooâ€¦.we get this stupid story with Phoebe turning into an idiot!!! Training wheels in the end? Please!
Standout Character-Chandler; I do like how he takes charge in the end
Syndication Edit-A scene with Chandler crying
Final Thoughts-I will give the creators credit for remembering two things in this episode. One is that Ben exists; itâ€™s nice to see him included more. The other is that the characters live in an apartment building with neighbors. Ever notice how we never see any other tenants unless the story dictates it? That being said, this is not a favorite episode of mine. Ross teaching Phoebe how toride a bike? Pretty sad when Full House did the same thing better! The candy story isnâ€™t better, are all these neighbors crack addicts or something? One scene has a neighbor waking Monica and Chandler up in the middle of the night for his â€œfixâ€. And the mob scene at the end is disturbing somehow. Rachelâ€™s story is silly but itâ€™s the only one I kind of like. Even though in the real world she would have been fired on the spot. The candy may have been good, but the episode leaves a bad taste in my mouth.
Grade=C-
Season 7, Episode 10
The One with the Holiday Armadillo
Â 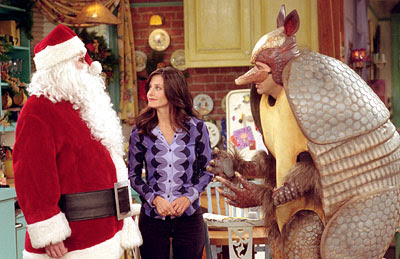 Plot Summary-Ross promises his son that he will dress as Santa, Chandler tries to learn how to tip, Phoebe is upset that Rachel likes living with Joey more than her
Funniest Line-â€œ I understand why Superman is here, but why is there a porcupine at the Easter Bunny’s Funeral?â€â€¦.Phoebe
Nitpick of the episode- To be fair, the armadillo costume is funny but what in the world made Ross settle on that of all things??
Standout Character-Ross, Like his attempts to teach his son a new religion and while not a big fan of sight gags but having him dressed up in that armadillo costume is hilarious
SyndicationEdit-Chandler trying to tip Gunther
Final Thoughts-This episode is just plain funny. I remember laughing so hard at that last scene when Phoebe and Rachel walk in to see Superman, an armadillo, and Santa Claus all together. This is something that should have been stupid but I guess the writing wins one. Being someone who adores Christmas I always wondered how those who donâ€™t celebrate handle it, and this episode does a great job giving a glimpse into that common dilemma. The Chandler story was grade Afiller and thatâ€™s all. The stuff with Phoebe and Rachel is well done. The creators realized that their living together was boring but at least they acknowledged the transition rather than pretending it never happened like so many shows do. And even Phoebeâ€™s attempts to scare Rachel out of Joeyâ€™s place are funny. A surprisingly funny episode.
Grade=A-,their best Christmas episode
Season 7, Episode 11
The One with all the Cheesecakes
Â

Plot Summary-Chandler and Rachel argue over a cheesecake, Phoebe is angry at Joey for blowing off dinner plans, Monica tries to determine why she wasnâ€™t invited to a wedding
Funniest Line-â€œSo it’s really a question of who could you have possibly doneâ€â€¦.Ross
Nitpick of the episode-The whole cheesecake story is just plain stupid. Hey Chandler hereâ€™s an idea, if you loved the cheesecakeâ€¦.order one foryourself!!!!!!!!!!!!!!
Standout Character-Joey, not only does he have a very strong friend moment with Phoebe in the end but he also gets the last laugh when he discovers Rachel and Chandler crawling on the floor eating cheesecake
SyndicationEdit-The scene where Phoebe yells at Joey was longer
Final Thoughts-Did the writers even try this season? I mean a whole episode with Chandler and Rachel fighting over some dumb cheesecake? Letâ€™s talk about the good stuff first. Glad that David finally returned from Minsk and the scenes between him and Phoebe did not disappoint. The best part is the scene between Joey and Phoebe right after David leaves. Monicaâ€™s story wasnâ€™t too bad thoughit seems she could have saved herself some grief by just calling the bride.Normally I love when Rachel and Chandler get a story together but this one was just stupid. Why should we care about this? In fact itâ€™s Joey who comes in and gets the last laugh in the end!
Grade=B-
Season 7, Episode 12
The One Where Theyâ€™re Up All Night
Â

Plot Summary-Ross and Joey end up trapped on the roof, Chandler and Monica are unable to sleep, Phoebe deals with a fussy smoke alarm while Rachel and Tag discuss whether or not a package was sent out
Funniest Line-â€Deep Impact was the one with Robert Duval. Armageddon is what’s going to happen to you if you wake me up.â€â€¦..Monica
Nitpick of the episode-Phoebeâ€™s story is awful, a fire alarm wonâ€™t stop beeping?Really? You canâ€™t have a show more or less grounded in reality than do a story so far-fetched like that.
Standout Character-Chandler and Monica
Syndication Edit-There is an extra scene at Phoebe’s place, where she covers her ears to stop hearing the alarm
FinalThoughts-Honestly, I kind of liked this one. All the stories are funnyâ€¦except for Phoebeâ€™s which is plain dumb. I applaud the writers for coming up with something to keep Phoebe in the episode, which is hard considering the premise, but they ultimately failed. We see Chandler and Monica acting like a normal couple,and there are a couple great Monica gags. Rachelâ€™s story arc with Tag plugs along but the real focus is Joey and Rossâ€™s attempt to climb down the balcony.Itâ€™s too bad none of them brought their cell phones with them.
Grade=B,Phoebeâ€™s story sucks
Come back next week as we continue Season 7, and see how much worst it gets
Share on Social Media
twitterfacebooktumblrredditemail
Follow us on Social Media
twitterfacebookyoutubetiktok