Plot Summary-Monica and Rachel demand their apartment back from the guys; Ross wants Emily to stay and ends up proposing
Funniest Line-â€œSo get a job here! I’m always hearing about foreigners moving in andstealing American jobs. That could be you!â€â€¦.Ross
Nitpickof the episode-I always liked how this time Phoebe is involved with the game and Ross is nowhere to be seen. In many ways this episode is like a â€œwhat if the one with the Embryoâ€™s had featured Phoebe rather than Ross as the neutralparty”. Â Rachelâ€™s hatred of the guys place is ironic since she will live there later in the series.
Standout Character-Rachel, when Ross makes his annoucement you can see what she is feeling right on her face
SyndicationEdit-The game is longer
Final Thoughts-Can a bland episode be fantastic? I guess so because thatâ€™s what we get here.Â  It just ends the arc about the apartment switch and sets up the remainder of the season with Ross engaged to Emily. However the scenes involving the apartment stuff is really funny. The best of all of course at the end. That moment when Chandler and Joey enter their apartment, fully restored, is just great. Then the payoff at the end with Rachel and Monica thanking them is equally hilarious. Just a fantastic series of events, followed by that heartbreaking scene where Rachel finds out Ross isengaged to Emily.
Grade=B+mostly just for the last five minutes (the gag with the Santa pants is lame)
Season 4, Episode 20
The One with all the Wedding Dresses
Â 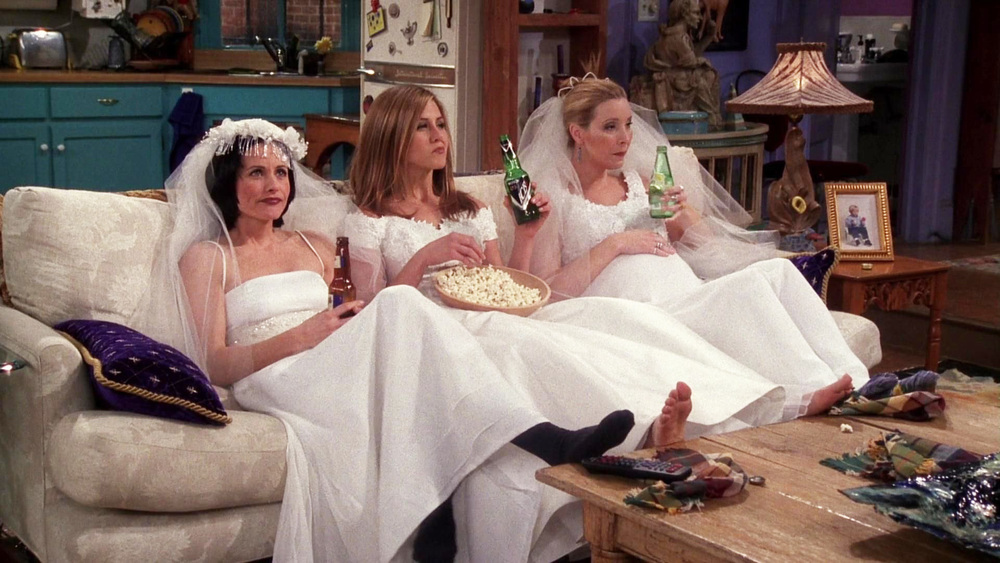 Plot Summary-Chandler is sick of Joeyâ€™s snoring, Ross asks Monica to pick up Emilyâ€™s wedding dress, Rachel is depressed about Rossâ€™s engagement
Funniest Line-â€œI wish there was a job where I could wear this all the time. Maybe someday there will be!â€â€¦.Monica (funny the way she says it)
Nitpickof the episode-Iâ€™m no woman but pretending to get married the way they did here at Monica and Phoebeâ€™s age seems a little disturbing. By the way Ross, slow down man!
Standout Character-Rachel, totally believable response, you do feel bad for her
Syndication Edit-Chandler talking to Gunther
Final Thoughts-There are many times especially in the early days when they treat Chandler and Joey like an old married couple. This one may be the lamest. I mean, how loud can Joeyâ€™s snoring be? I think I agree with Joey when he tells Chandler heâ€™s the one with the problem. And need I say the story goes nowhere? Elsewhere we get some good stuff here especially Rachelâ€™s jealousy over Ross and his engagement. Itâ€™s just handled well and I am glad we have seen the lastof Joshua (though I admit that ended awfully fast). The talk Ross and Rachel have early on is a well done moment. The stuff with the wedding dresses is ok, I do like the scene at the end with all three dressed up and yes trivia lovers Rachel is wearing the same dress she wore in the pilot.
Grade-C+
Season 4, Episode 21
The One with the Invitations
Â

PlotSummary-Ross debates inviting Rachel to the wedding while Rachel debates whether or not she will attend.
Funniest Line-â€œWe just sit here. I mean, if I died, the only way people would even know that I was here would be by the ass print on this chair!â€â€¦Chandler
Nitpick of the episode-I have a love/hate relationship with clip shows. This one is ok,but did we need one every single season??Â  I really think Rachel makes a mistake declining the invitation. She should have put her feelings aside to be therefor her friend. Ross has every right to be upset later.
Standout Character-Since itâ€™s a clip show no one, although Rachel comes close
SyndicationEdit-more clips
Final Thoughts-Great, a clip show. Actually I will go easy on this one because it was the first (of many unfortunately) and at the time the episode aired it was before the series was syndicated. Which means I had forgotten a lot of theearly stuff when I saw this. This episode was a way to clue in new viewers and refresh the older ones on the Ross/Rachel saga and to be fair it did its jobvery well. Too bad nothing else really happens in the episode.It’s also the only time in the Ross/Emily saga we see Ross thinking about Rachel which is nice to see at least once.
Grade=B-,good for a first time viewer boring for a regular fan
Season 4, Episode 22
The One with the Worst Best Man Ever
Â

Plot Summary-Phoebe experiences major mood swings, Ross regrets choosing Joey to be his best man when he loses Rossâ€™s ring
Funniest Line-â€œIt’s just, usually, when you’re done with the pregnant thing then you get to do the mom thing. I’m gonna be sitting around in my leather pants, drinking tequilaâ€â€¦.Phoebe
Nitpick of the episode-I guess I will state the obvious. Why did it take so long for the guys to guess that the duck ate the ring? We really see how much they care forthe duck, too bad he will disappear in another year or two.
Standout Character-Phoebe, Lisa Kudrow does a great job with the mood swings and itâ€™s good to see that Phoebe is sad about giving up the babies which we willexplore more later on
Syndication Edit-A different ending with Monica telling Emily the fate of her ring,Phoebeâ€™s shower is a bit longer
FinalThoughts-EW was really hard on this episode, but I kind of like it. Whatâ€™swrong with exploring how close friends the guys are? This may not be the best episode of the season, it really feels like they were filling the time beforethe finale, but itâ€™s still pretty good. Yeah the duck montage seemed a bit unnecessary I will grant that. Phoebe’s story is very well done and I love how Monica and Rachel act so nervous around her. It only figures Phoebe would be upset the end is near and am glad the show didn’t ignore it.
Grade=C+
Season 4, Episode 23 & 24
The One with Rossâ€™s Wedding
Â

Plot Summary-The gang go to London for Rossâ€™s wedding. Joey annoys Chandler as they tour, Rachel realizes she loves Ross and rushes off while Phoebe works to warn someone. Monica gives advice to Emily and is depressed Ross is getting married, which leads her into the arms of Chandler. Wow,.a lot happens in this episode!
Funniest Line-â€œFrom now on everyone gets along, and if I hear one more word, nograndchildren!â€â€¦.Ross
Nitpick of the episode-When I first saw this I was appalled that they had Monica and Chandler sleep together. Not sure why, but thankfully they made it work. In fact that was the best thing that could have happened to the show not to mention the characters but we will talk more about that next week. By the way, what is Chandlerâ€™s problem when he is touring with Joey? He comes off like an uptight snob!
Standout Character-Toss up, everyone shines in this one
Syndication Edit-Joey and Chandler taking in some of the sites in London, a really awfuljoke was cut. When Rachel is shocked no one told her she loves Ross, Phoebe says it would be like telling Monica she likes to clean. Great line, but the extended version she goes on to say â€œor telling Joey heâ€™s so gayâ€. That makes no sense and ruined the joke, glad they cut it. Also see the moment where Monica advised Emily to cancel the wedding if she was not happy with thechurch.
Final Thoughts-Well, here we are. What can I possibly say about this one? This was such a huge finale that it actually changed the series! The fact that the show actually went to London is amazing, and they took advantage of it. Lisa Kudrowwas unable to go but Phoebe did not get shortchanged, in fact she has just as much to do and just as many great lines here. This episode is funny, full of story, and has more than one surprising moment. It even has a strong supporting cast which is used very effectively. The big debate of course is whether Rachel should have gone to London like that. I donâ€™t think it was her smartest move to be honest. Hugh Laurie has a small role which may be one of the best of the episode, good to see someone talk to Rachel like that. Monica and Chandler was an unexpected surprise but these characters had been stagnating so bad that they needed to do something. But the major cliffhanger was brilliant and when Ross said â€œRachelâ€instead of â€œEmilyâ€, well, that was a long summer indeed!
Grade=A,does everything very well
Next week we look at season 5 which brings a big change in tone to the series, not mention some revitilizing fresh air. This was my favorite season, but we will get into that next time.
Share on Social Media
twitterfacebooktumblrredditemail
Follow us on Social Media
twitterfacebookyoutubetiktok