Season 4, Part 2
Season 4, Episode 7
The One Where Chandler Crosses the Line
Â

Plot Summary-Kathy and Chandler reveal their feelings; Rossâ€™s keyboard playing is kind of odd
Funniest Line-â€œOver the line? You are so far past the line you can’t even see the line! The line is a dot to you.â€â€¦.Joey
Nitpick of the episode-Ross is moving more into dufus mode, he really canâ€™t tell that what he is playing is not music?
Standout Character-Chandler, itâ€™s really his episode
Syndication Edit-An entire subplot with Rachel enjoying spending time by herself
Final Thoughts-Amazing how an episode can be powerful and empty at the same time.Aside from the Joey and Chandler stuff, nothing really happens here. Rossâ€™s keyboard story is funny at first but gets old. The final scene between Chandler and Joey is very well done, and makes up for a lackluster episode. There was a Rachel story which can only be seen on the DVD, and it deserves to be cut the story is really boring. For some reason this show always had trouble with two parters,they just never know how to give the other characters something to do thatisnâ€™t just filling the time. Itâ€™s Chandlerâ€™s show and to be honest, he has much better chemistry with Kathy than Joey does.
Grade=C+
Season 4, Episode 8
The One with Chandler in a Box
Â 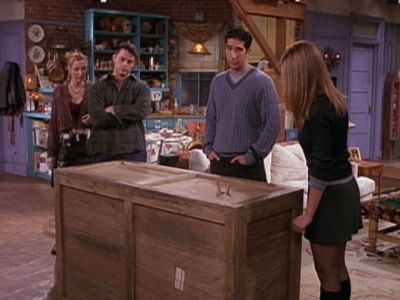 Plot Summary-Chandler agrees to stay in a box as a way to prove to Joey how much he cares for him. Monica hooks up with Richardâ€™s son. Ross accuses Rachel ofhaving no sentimentality.
Funniest Line-â€œYeah, but Monica, do youreally want to be in a relationship where you can actually use the phrase,”That’s not how your dad used to do it.” – Phoebe
Nitpickof the episode-Monica really should have known right away that going out with Richards son was a bad idea
Standout Character-Joey; I love the ending when we see the real lovable guy Joey iscome shining through. He canâ€™t stay mad and wants his friend to be happy. That is a small but very good moment.
SyndicationEdit-The teaser with Chandler trying to call and apologize to Joey to no avail, the group picking their secret Santa names
FinalThoughts-One of my favorite Thanksgiving episodes, and a nice conclusion to the story arc. It was nice of the creators to give Chandler a real romantic interest, and he gets her at last. The secret Santa stuff was kind of lame, but I did like Ross calling out Rachel on her need to return every gift she evergets. There is a point when that becomes rude. Monicaâ€™s story is kind of creepy but is handled real well. It works because they donâ€™t try to hide the fact itscreepy the episode comes right out and says it. Itâ€™s the ending of the episode which really makes it work when it looks as though Kathy is about to leaveuntil Joey gives Chandler a break; itâ€™s a very sweet moment indeed withoutbeing over the top.
Grade=A-
Season 4, Episode 9
The One with theyâ€™re Going to Party!
Â

Plot Summary-Ross and Chandler are excited when an old friend says heâ€™s coming to town, Rachelâ€™s chance for a promotion is squashed by Joanna, Monica must choose between her dream job or working with Phoebe
Funniest Line-â€œYou’re the cook! Without you it’s just me driving up to people’s houses with empty trays and asking for money!â€â€¦.Phoebe
Nitpickof the episode-Why did we get all that stuff about Monica becoming a caterer if they were going to 180 it a few episodes later? As for the end with everyone hating Monica at her new jobâ€¦more on that later.
Standout Character-The guys for realizing they arenâ€™t kids anymore
Syndication Edit-A great line is cut involving Ross and Chandlerâ€™s previous experience with Gandalf
Final Thoughts-This is an interesting episode, as it involves the characters evolving but not where they expected. The guys realize they are not kids anymore, Monica realizes her true dream to be a chef not a caterer, and Rachel gets a promotion. The problem is that the show likes to throw problems in to take away what they got. I donâ€™t mind that but here the complications seem so forced. Monica is hated at her great new job for no good reason and Rachel loses the promotion when Joanna is suddenly killed. Good episode but it gets annoying when character development gets stifled for reasons thatare clearly contrived.
Grade=B,Ok Sophieâ€™s satisfaction at the end is funny but Joanna will be missed
Season 4, Episode 10
The One with the Girl From Poughkeepsie
Â

Plot Summary-Ross debates dating a girl he must travel over two hours to see.Chandler sets Rachel up with a coworker; Monica brings in Joey to help her troubles at work. Phoebe writes a holiday song for everyone.
FunniestLine-â€œI haven’t been picked on this much since I was in kindergarten and they had to bring in somebody from junior high to do the see-saw with me.â€â€¦..Monica
Nitpickof the episode-Oh man, I hate the Monica story! Sorry I donâ€™t care the reasons the idea that the employees in the restaurant would treat someone who could fire them at will like that is insane! I mean itâ€™s not her fault the old chef sucked so she got the job (which doesnâ€™t even come up in this episode!). Why punish her? Why does she need to pretend to fire Joey when she could literally fire someone AT ANY TIME?? She actually says that the reason she doesnâ€™t fire someone is because she isnâ€™t good with confrontation. The same woman who will later tackle a woman for a wedding dress?Â  How about when she yelled at the stoned guy in season 1? Or when she tried to return the race car bed? I mean what is up with Monica being a wimp this season? This time she needs Joey to bat for her, a few episodes ago it was Phoebe!
Standout Character-Phoebe, her holiday song is the only memorable thing in this one
Syndication Edit-Iâ€™ll honest, this episode is so forgettable that I have no idea
Final Thoughts-One of the most forgettable episodes ever! Well, for me at least. I already talked about how dumb Monicaâ€™s story is, especially when I think of later episodes where she is in control of the kitchen. I might be able to buy the others hating her, but the fact she canâ€™t stand up and take control is real hard to swallow. She isnâ€™t Rachel. Speaking of whom, she is great with Chandleras always but the story is fluff. Rossâ€™s story is boringly predictable.
Grade=C-, forgettable
Season 4, Episode 11
The One with Phoebeâ€™s Uterus
Â

Plot Summary-Phoebeâ€™s brother asks a big favor of her, Joey works as a tour guide in Rossâ€™s museum, Chandler seeks advice from Monica and Rachel on satisfying Kathy
FunniestLine-â€œWe share a wall! So either he’s great in bed, or she just likes to agreewith him a lot.â€â€¦..Chandler
Nitpickof the episode-Of course the reason for Phoebeâ€™s story is here is because Lisa Kudrow became pregnant in real life
Standout Character-Monica, simply because she doesnâ€™t come off as a wimp for oncethis season
Syndication Edit-A huge cut happens which eliminated a dirty joke. On the DVD after Monica does her lesson for Chandler, the three dart off to separate rooms and slam the doors! You can guess what they were doing, and understand why this didnâ€™tappear on the network broadcast.
FinalThoughts-Itâ€™s hard to believe but this episode actually begins a huge shift in the season, if not the series. When Lisa Kurdow became pregnant, they added the pregnancy to the show. This would end up changing the character, but more on that later. The story here is well done, and you know Phoebe could never turn her brother down. Â Chandlerâ€™s story doesnâ€™t really mean much but I do like how Monica teaches him about sexconsidering they would end up dating. Joey and Rossâ€™s story is stupid onseveral levels and I think I will just leave it at that.
Grade=B-
Season 4, Episode 12
The One with the Embryos
Â Plot Summary-While Phoebe prepares to have the embryos implanted; the rest of thegang competes over who know whom better with high stakes
Funniest Line-â€œ Actually it’s ‘Miss Chenandler Bong’.â€â€¦.Chandler
Nitpickof the episode-Wow, these guys really honor their wagers! I am on Rachelâ€™s side, it was just a game. Ah well itâ€™s always fun to shake things up a bit. And where did the fact the guys want the girls apartment come from anyway?
Standout Character-Phoebe, her little talk with the embryos is a cute moment
SyndicationEdit-Monica talking to Ross as he prepares the game
FinalThoughts-What can I possibly say about this one? Itâ€™s a flat out classic! It is so great to see just how well these friends know each other, and the whole episode is done extremely well. Itâ€™s also a nice way to shake things up, having the guys switch apartments with the girls. Phoebeâ€™s story is also really good,and thankfully we have spent some time with Frank and Alice so we do care about them. I think one of the reasons the story works is because all the characters play to their strengths, even Monica feels like Monica for once this season.And the fact that the question the girls get stumped on is about Chandlerâ€™s job was just brilliance!
Grade-A+,top 5 episode
Join me next week as we conclude Season 4 which sets the stage for a huge change in the series.