There was a time people heard â€œGroundhog Dayâ€ and thought ofa little animal poking his head out of a hole to see his shadow on the second day of February. Then 20 years ago a hit comedy came out, and turned â€œGroundhog Dayâ€ into a common phrase to describe dÃ©jÃ  vu forever after! Â This is something that amazes me and since this is Groundhog Day it seemed like the perfect opportunity to talk about it.

For those who don’t know I am referring to the 1993 comedy starring Bill Murray and Andie MacDowall. The basic plot is that Bill Murray is Phil Connors, a weather forecaster who gets stuck repeating the same day overand over. Which day? Groundhog Day!!

I admit it; I am a fan of this movie too. I will even go so far as to admit that very often I will put this movie on just because it happens to be February 2nd. And I am sure I am not the only person who pops the DVD in every year. This movie was a nice little comedy; it has funny moments and even some dramatic ones. The casting is great and Bill Murray does afantastic job going from jerk to nice guy. The repetitive nature of the story never gets boring, as we never see the same moment exactly the same.

But the real amazing thing about this film is how ingrained into our society itâ€™s become. How do I mean? I can’t count the number of times I have heard someone talk about something repeating (a weather pattern for example) and said something like “Yeah its like groundhog day today!”Â  I did some digging andfound that the military, yes the military!, usesÂ  â€œGroundhog Dayâ€ as a way to refer to a unpleasant, unchanging, repetitive situation. It was used by a member of the parliament back in 2004, and the British Prime Minister was very satisfied with that description of The Hutton Inquiry (look it up if you’re not familiar withthat one).

Is it the premise? Having Bill Murray play a jerk who learns to loosen up a bit had already been done in 1988 with â€œScroogedâ€ so that isnâ€™t new. Is it the gimmick of repeating the same day over and over? Maybe, if this were the first time it had been done. But to be fair this was also nothing new either. Plenty of novels and science fiction had already used this, including StarTrek-TNG which did a great episode called “Cause and Effect” which did the time loop (and being science fiction, they could explain it!).Â  The episode beat the movie by a year. Twilight Zone did it thirty years earlier, with the episode â€œShadow Playâ€. The same year Groundhog Day came out we got a TV movie called 12:01 which had the same basic premise with a little â€œBack to the Futureâ€ thrown in. Â It was adapted from a 1973 short story which had already been adapted to a film in 1990, so the time loop concept is far from original.Â Â  (off the subject, the creators of 12:01 claimed that Groundhog Day ripped them off but this was never proven and the matter forgotten. I saw this movie and recommend it, itâ€™s pretty decent for a tv movie)

The time loop gimmick sure has been done since the movie came out from Disney’s Christmas version to “Source Code” last year. X-Files, Angel, and Lois & Clark have done it just to name a few. ABC Family has done two or three Christmas themed variations, and I am sure Dr.Who has done it once or twice. And yet itâ€™s this particular movie that everyone remembers when they experience some kind ofdÃ©jÃ  vu.

Now itâ€™s true that It certainly isn’t unusual for a movie or some other form of media to become ingrained in our society. Say “Beam MeUp, Scotty”, “May the Force Be With You”, â€œWarp Factor 2!â€, Â or “Look, up in the sky!” to pretty much anyone and I think they will get the reference immediately. But these are incredibly popular characters with a legion of fans. Itâ€™s just not very often that a silly comedy manages to do this. And the fact that 20 years later (yeah,it’s that old already) people still refer to this movie and remember that gimmick is astounding. Like Roger Ebert said when a movie can doi that it sure did something right!

There was just something about this movie which struck a chord with people. I am not sure what it was exactly. Maybe because it wasn’t a huge sci fi production. It was a little movie really. Anyone can see this movie and enjoy it, even if you hate sci fi and never watch it. Maybe that’s why it works,. It’s just like the reason why Star Trek IV was such a big hit, because you didn’t need to be a huge sci fan lover to enjoy the action and humor.

For a little movie it has a lot going for it. The cast is only a handful of people but they’re all strong characters, they donâ€™t waste time trying to explain why what is happening is happening they just give us the story, the chemistry between the two leads was believable you really wanted to see them get together in the end. And there is a strong moral here, about being good and kind to people. Phil Connors isnâ€™t an evil person; he isn’t like Ebeneezer Scrooge who was just nasty to people. He is just a jerk who only thinks about himself. In the beginning all he wants to do is get the hell out of the “hick town”. As the movie progresses he learns to be a better person, and to care about others. He honestly cares about the town by the end and doesn’t help out because its his ticket out of the loop but because he realizes he has the power to do something and wants to!

So there you have it, a little comedy twenty years ago which everyone remembers. The funny moments are funny, the serious moments are serious, and in the end the conclusion is very satisfying. Itâ€™s one of myall-time favorite movies, and yeah I may just have to watch it once again this year. 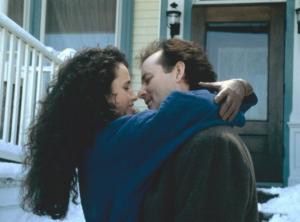