Okay, so I’ve made a series of blogs titled WIJDW, which is short for Why It Just Doesn’t Work. I think I should explain further just why I write these columns.

However, this does NOT mean that an audience should just shut their brains off and accept everything they see. A story still has to be grounded in reality and human nature. Even a fantasy story has to have limits and obey its own internal logic, or else it will degenerate into nonsense. If one goes too far with their fantastic or ridiculous elements, an audience is likely to go “Oh, come on now!”. 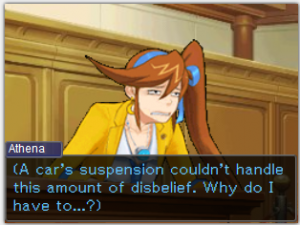 When a storyteller ventures too far from reality and violates the work’s internal logic, then they cross that line between asking the audience to suspend disbelief, and asking (or even demanding) that they shut their brains off. Thinking about what happens in a work of fiction should NOT prevent one from enjoying it. If it does, well there’s a problem. The story … or at least a certain part of the story … will just not work.

Of course, it IS possible to still like something even if a certain scene or portion of it is absurd or nonsensical. Chuck Sonnenberg, aka SFDebris (reviewer of Star Trek and other sci fi franchises) discussed the issue a few years ago and cited the fourth Indiana Jones movie as an example.

SFDebris: You can still like something. I’m not saying you have to hate it. I mean … Oh look, here’s one of my sacred cows, okay? To me, Indiana Jones is made of a secret blend of eleven types of awesome. And I’ll even go on record and say that I really liked Indy 4. But I’m also going to admit that when he used a refrigerator to survive an atomic blast, my jaw dropped open at how absurd it was. Yeah, I liked this movie, I loved this movie. But that scene was just stupid!

Therefore, in WIJDW, I address scenes in films that I otherwise liked as well as films I didn’t care for as a whole.

But of course, in more extreme examples, violation of realism and internal logic can completely ruin one’s enjoyment of a film or other work of entertainment. In extreme cases, it becomes IMPOSSIBLE to accept the film (or whatever) as a whole, either because the violation of realism and/or internal logic is just too much, or because of multiple violations of realism and/or internal logic. We end up rejecting the work, and making snarky reviews of it on the Internet. It might end up being listed as So Bad It’s Good, or if it’s really awful, on TV Tropes’ So Bad It’s Horrible page or (if it’s part of a franchise) the Dethroning Moment Of Suck page.

The thing is, I’m not sure a lot of professional creators understand this, even though they presumably should. Some don’t seem to get that suspension of disbelief has its limits. Sometimes, they take the audience for granted, which is pretty much the worst thing creators can do.

In some cases, it’s clear that They Just Didn’t Care. Sometimes they deliberately half-ass a story because it’s more of a job to them then something they really want to do artistically, and/or have a deadline they don’t think they can meet if they fuss over details. Some of this may be the result of Executive Meddling (i.e. mandates from editorial or studio executives who are NOT writers but dictate content). This most often happens in comic books and long-running TV shows, though it happens in movies, too (especially in later sequels to popular movies).

Of course, in some cases, the Rule of Funny or the Rule of Cool can excuse illogicalities. In a silly comedy or a mindless over-the-top action piece, we’re willing to excuse more things. Therefore, things like Airplane, the Naked Gun, Hot Shots, Looney Tunes, any Mel Brooks movie, Animaniacs and so on probably won’t be discussed in WIJDW because we’re not meant to take those seriously anyway.

But in any work that isn’t a ‘silly’ work like the examples listed in the previous paragraph, we’re expecting the story to have the characters act realistically and in keeping with their established characters. And we’re expecting the work itself to have a sort of internal consistency, and not violate such internal logic for the sake of a cheap joke or because a comic book editor/studio exec/whatever wanted such and such to happen, or because the writer just didn’t understand how suspension of disbelief works.

So why do I write these columns? Why do online video reviewers like Rowdy C Moore of TV Trash, Linkara of Atop the Fourth Wall, and Toongrin/Whyboy do their reviews? Why do Moviefan12 and Curiosity Inc. and others do their text review blogs? Why do professional critics like Leonard Maltin and others with their own columns and/or TV shows do their reviews? It’s because we’re all part of the audience, and our job as the audience is to tell everyone else (including the creators of the work) just what went wrong with the creators’ more questionable products.

By doing this, there’s a chance (however slim) that the creators will get the message, learn from their mistakes, and realize why a certain thing they did in their previous project … just doesn’t work.

Or at the very least, we hope we make audiences think more about what did and didn’t work, and think about how various works of fiction could have been better.

Okay, I think I’ve rambled on enough for now. Feel free to leave any comments or further observations on the subject.

When originally posted, this article received the following comments.

Jim Bevan
02:19 PM on March 08, 2012
Interesting you bring this up, because I just watched “Justice League: Doom”, and ran into quite a few moments where I thought the writers were REALLY straining suspension of disbelief. First, they relied on the whole “being able to talk in space” bit, which I really hoped the medium had grown out of. Then there’s a scene where Superman is flying DIRECTLY NEAR THE SUN, even staring into it as he tries to zap missiles. How did he not burn to a cinder? How were his retinas not singed out? I know he gets his power from solar radiation, but that’s stretching it. And then there was the solution to stop Vandal Savage’s plan, but I won’t get into that because of spoilers. I know the writers were trying to make it seem cool and epic, and they succeeded, but I’m sure there were other ways of handling these scenes so that they didn’t look so dumb.

Anakin
01:58 PM on March 08, 2012
Hi Chris Lang. I’m with you completely on the whole “suspension of disbelief” concept. As long as the film doesn’t stretch it over the line, it’s a wonderful way to let creatively clever imaginations do amazing things in a film. Sometimes it works(Half the physical/mechanical stunts in The Goonies), and sometimes it doesn’t(The Biplane flying dogs in UP). I’ve got to admit, lately I’m having a harder time willingly suspending my disbelief in films anymore. They just seem to care less and less about realistic physical situations and go for more “Oh WOW!” moments(especially if they can work them into 3D) just for the sake of having them…whether they advance the story or not…..sigh! I like your WIJDW blogs, and look forward to your next one, my friend. Peace.

BigBlackHatMan
09:22 AM on March 09, 2012
I have always thought one of the stranger moments in a movie comes in Strange Brew when Hosehead takes off and flies to beer. That movie was silly throughout, but the flying dog moment was a little out there. Good article.

Anakin says…
Hi Chris Lang. I’m with you completely on the whole “suspension of disbelief” concept. As long as the film doesn’t stretch it over the line, it’s a wonderful way to let creatively clever imaginations do amazing things in a film. Sometimes it works(Half the physical/mechanical stunts in The Goonies), and sometimes it doesn’t(The Biplane flying dogs in UP). I’ve got to admit, lately I’m having a harder time willingly suspending my disbelief in films anymore. They just seem to care less and less about realistic physical situations and go for more “Oh WOW!” moments(especially if they can work them into 3D) just for the sake of having them…whether they advance the story or not…..sigh! I like your WIJDW blogs, and look forward to your next one, my friend. Peace.

Well, I’ve seen ‘Up’ once, and loved it. But yeah, now that you mention it, the dogs flying biplanes is a bit odd seeing as how, aside from the devices that give them voices, they’re usually shown as regular dogs without opposable thumbs.

Anyway, putting in ‘OH WOW’ moments for their own sake is nothing new. It seems to come in cycles. The original “Star Trek: The Motion Picture” had plenty of stuff that’s intended to be “OH WOW” moments, but instead come across to many as what Obscurus Lupa would call Pointless Padding Scene Time. (They’re not over the top enough to be Big Lipped Alligator Moments. Speaking of which, I might just tackle the moment from All Dogs Go To Heaven that inspired the term in a later WIJDW).

And so those are the original comments and discussion. If you have any comments and thoughts about suspension of disbelief, feel free to leave them below.