WIJDW: Superman III and its attempt at superhero comedy

Hello and welcome to another installment of WIJDW (Why It Just Doesn’t Work). Here, I take a look at scenes from movies and other media and explain why they are illogical, nonsensical, and/or just … don’t work.

This time, I’ll be taking a look at Superman III, the third installment of the 80s Superman movie franchise. While the first two installments are widely regarded as classics and among the best superhero movies ever made, the third and fourth installments are … well, not thought of as highly. The fourth film had terrible special effects, a number of ridiculous moments, and a poorly-thought out plot. And the third … attempted to be both a comedy movie and a continuation of the franchise. And that just doesn’t work.

Okay, for starters, while the first two Superman films had their moments of comic relief, they were more or less ‘straight’ superhero films. They played the danger seriously, the character relationships seriously, and the world they lived in seriously. Superman, his antagonists, and Kryptonian artifacts were the fantastic elements in what was otherwise a representation of the everyday world. Therefore, we had little trouble suspending disbelief. We could, as the tagline for the first film said, believe that a man can fly.

However, Superman III throws the internal logic of the first two films out the window in favor of slapstick and over-the-top ridiculous sight gags. The opening sequence, in which a bunch of slapstick is juxtaposed with a serious scene of Superman saving a person from drowning, sets the tone for a very uneven movie.

As the film goes on, we see the world Superman inhabits become less realistic and more like something you’d see in a ridiculous comedy movie. For example, we see Gus Gorman (played by Richard Pryor, who gets more screentime than Christopher Reeve’s Superman) meeting the film’s main villain Ross Webster (Robert Vaughn) at a rooftop ski resort. I repeat this … a rooftop ski resort. On the roof of a tall building in Metropolis.

I ask you, does this sound like ANYTHING anyone would do in the real world? Someone who had enough money to build such a thing would presumably be smart enough to know how dangerous such a thing would be, and would know better than to waste time and money doing so. In fact, anyone seriously suggesting such a thing would need to have their head examined. (If they succeeded in getting such a thing constructed, they would probably be the only one who used it …. and they’d end up being featured in the Darwin Awards after they suffer the consequences for their stupidity).

Sure enough, Gus Gorman ends up skiing over the edge of the rooftop. But does he get saved by Superman (you know, the guy whose name is in the title, and who people paid to see when this was in the theatres)? No. Instead he lands on a slanted glass roof, skiis off of that, and lands safely on the street unharmed. Instead of being killed by the fall when he landed on the roof (regardless of whether the glass held or not, a fall from that many stories still would have killed him), he is saved because the filmmakers sacrificed realism in favor of slapstick.

Then there’s the sequence that occurs after Gus Gorman attempts to hack into a weather satellite (that probably makes more sense in context than what I’m about to describe). Because he had to get drunk in the process of making a security guard drunk before he could do this, he makes a number of errors that result in Metropolis’ computer technology being messed up. This results in more ridiculous slapstick.

And it results in what is probably the most nonsensical scene in the movie. To start with, as a result of the computer problems, traffic signals are constantly switching between red and green, and ‘walk’ and ‘don’t walk’. This results in a bunch of confused motorists and pedestrians … and something that’s just so weird I don’t know if my description can do it justice, even with the help of a picture. 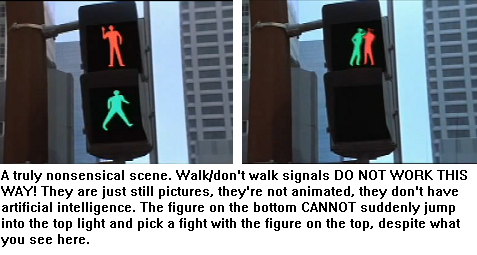 Okay, so what happens is that the walk/don’t walk signs keep flashing back and forth until finally both are lit simultaneously. In case the pic doesn’t show up and you don’t see the caption I wrote for it (because a series of still pics really doesn’t do this moment justice), what happens is that the green ‘walk’ man at the bottom suddenly pulls itself upward into the ‘top’ light and picks a fight with the red ‘don’t walk’ figure at the top.

Excuse me? Have we wandered into a different movie all of a sudden? In WHAT world do walk/don’t walk signs do this sort of thing? As far as I know, no one has ever created walk/don’t walk signs with animated pictures (instead, they’re merely still pictures that are lit by lights). No amount of computer hacking could make a ‘walk’ man leave its position, pull itself into the ‘top’ light, and fight the ‘don’t walk’ man.

And no, they do not have artificial intelligence or any sort of life, either. At least not in the real world.

All the scenes I just described, I feel, are part of the reason why Superman III fails. Like Joel Schumacher’s Batman and Robin over a decade later, Superman III attempts to insert nonsensical comedy moments into a series that previously maintained a certain amount of realism. In doing so, both Superman III and Batman and Robin violate the internal logic of the universe they’re supposed to be set in, and therefore the comedy … just doesn’t work.

To be fair, Superman III DOES have some good moments. We have Clark returning to Smallville to meet with the grown-up Lana Lang, and we have the ‘badly made artificial Kryptonite turns Superman into a jerk’ angle that culminates in the ‘Superman vs. Clark in the junkyard’ fight.

And this latter angle results in a few comedy bits that actually work. Such as Superman straightening the Leaning Tower of Pisa only to make it lean again after he returns to normal (much to the dismay of the souvenir vendor — that bit makes me smile just thinking of it). Bits like those work not just because they’re funny, but because they involve Superman and they do not violate the internal logic of the Superman film universe. The same, however, cannot be said for most of the slapstick and all the gags involving computers.

And it especially cannot be said for the traffic sign gag, which just comes out of nowhere, has little or no bearing on the plot, is WAY over the top in terms of ridiculousness even in the context of this film, and isn’t mentioned again afterwards. The traffic sign gag is, of course …

And I think I’ll get to analyzing the scene that inspired Lindsay Ellis to come up with the term ‘Big Lipped Alligator Moment’ in a later WIJDW column. But for now, I’ll just wrap up today’s column.

Agree? Disagree? Have any insights or further observations? Feel free to leave your comments.

In the previous iteration of Manic Expression, this post received the following replies.
3 replies

Next month I’m reviewing this one, so thanks for the refresher course about how bad the comedy in this is! Pray for me!

You did pretty good with that one, going through most of the movie and talking about the rest of it (most of the stuff I didn’t get to since my emphasis was just on a few scenes).

Ah, this is one of my earlier blog posts, and I pretty much stand by what I said in it. (Testing to see if the replies work). While there are definitely worse superhero movies out there, and worse Superman movies out there (*coughbatmanvsupermancough*), this film still is certainly far from the best in the Superman franchise. It’s like two different movies colliding into an uneven mess of a film.