A Look at Disney Gets Tangled for Halloween: Who’s Afraid of the Big, Bad Wolf? 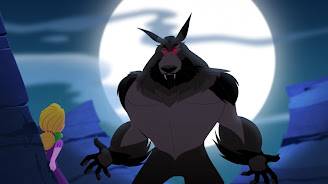 Werewolves are some of the more interesting monsters that one can observe. In many regards, they are similar to the dynamic of Jekyll/Hyde in how they can bring out a different side of the human host.  This is something seen in the final season of Tangled as it introduces the idea of how werewolves would work in the Kingdom of Corona.
One of the most interesting aspects is how this episode instead of using the traditional werewolf bite to turn someone into a werewolf, it instead feeds on anger. 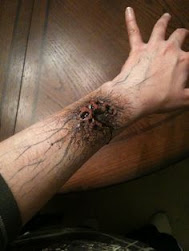 It’s an easy way of working the idea of a werewolf into a children’s show while making a deeper connection about emotions and how it’s okay to be angry and not be happy all the time.
The Plot
As mentioned, this episode deals with the idea of anger mainly in the form of two orphan sisters that we met back in season one that Eugene nicknamed Angry and Red.  A werewolf has been terrorizing Corona and Rapunzel needs to protect her people. This is an important thing that we will come back to.
Angry and Red have moved out of a treehouse near Old Corona into living in Corona but Red isn’t too pleased with this idea and this will be brought back up.  At the same time, the wolf attacks are happening and an obnoxious hunter named Creighton shows up but is quickly kicked out after showing that she’ll go too far for Rapunzel’s liking.

The princess wants to find the werewolf and peacefully deal with this but well, that doesn’t go as planned.  This is where an important thing considering the mark of werewolves is brought up here.

….a werewolf in its human form has a blue paw shaped mark known as “the mark of the wolf”, which is found somewhere on the person’s hands, arms or face

This is a simple thing to understand but something that has shown up in other werewolf media and again the mark is usually a bite but that is not the case here as it comes from a curse that harbors on suppressed rage.

The werewolf has been attacking the village of Corona and Crieghton even after being kicked out is still trying to seduce the werewolf nad hurt it.  This is when we find out the truth as Red, one of the Orphan sisters is the werewolf.  She had just wanted to be heard and the curse said it would give her that opportunity about a month before the events of the episode. This is why she agreed to the curse. 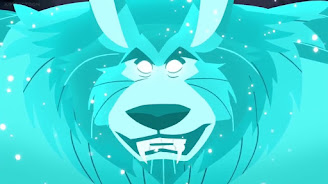 The book that Creighton brought with her included a ritual on how to remove the curse but that was a ruse all by Creighton to trap the werewolf. 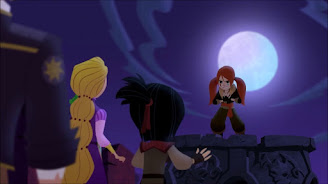 This is where Red finally lets all of her anger and frustration even to the point that she hates the nickname that Eugene gave her.  I believe this is better seen to understand how she’s feeling.  Also, listen to what she says.

Maybe I like being the wolf. Maybe I’m tired of everyone of telling me what to do. And I’m sick of people assuming I’m okay because I won’t say I’m not. And another thing, I don’t even like the name Red.

When viewing this, I believe that this shows how just be people don’t speak up, they still need to be checked up on. And do not fall into the trap of thinking someone is fine.  What I find interesting here is how you can observe that the Wolf gives Red a sense of power, something she’s not used to and she enjoys it because it gives her control that she isn’t used to.  Red goes through with the transformation and Creighton still goes after her but Angry can get through to her sister in one simple and important act. 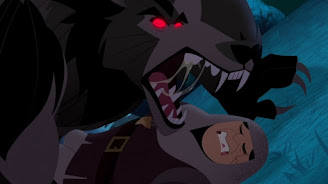 She doesn’t call her Red but uses her real name, Catalina, and apologizes for not listening to her more and promises to fix that in the future.  After this ordeal, the girls move back into the treehouse with some trinkets given to them from the castle. 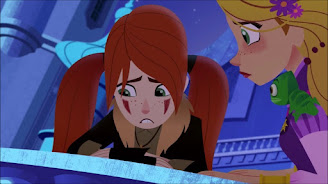 I had always liked Catalina as she was probably my fourth favorite Tangled character but this episode really changed all that. This episode explored her psyche and showed there was more to her than the audience may have thought.  Making her the werewolf was an interesting choice but one that I think works as it contrasts with what the audience had assumed of her before this episode. Also, I really like her werewolf look as it’s very bulky. 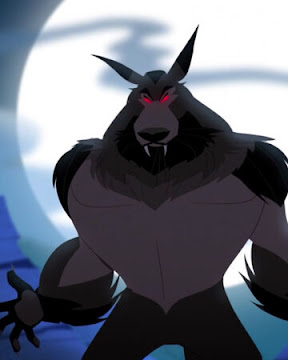 It’s very bulky and you can see the strength that this werewolf has.  Also, I wanna bring up the title here.  any Disney fan can see that this episode is pulled from the classic song, Who’s Afraid of The Big Bad Wolf from The Three Little Pigs short.  In that short, the wolf is a villain no questions asked but that is not the case here and that is reflected by one change putting a comma after the word, big.

The comma placement in a way is making the audience and the characters question is the wolf a bad person or just a person that needs help. It becomes a little murkier when it’s revealed that the wolf is a character that we already know. I find that this becomes more powerful when Catalina decides to keep the werewolf curse and use it as a positive and we even see the wolf in future episodes of the season.

It’s similar to how Fluttershy embraces Flutterbat in later episodes of MLP as something not to be ashamed of but something that is a part of her. 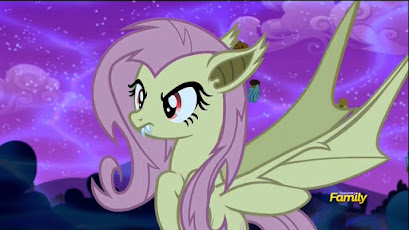 One could argue that this is just a reference to past episodes and in a way that is true but I also believe it speaks to how both these characters are comfortable with this side of who they are. 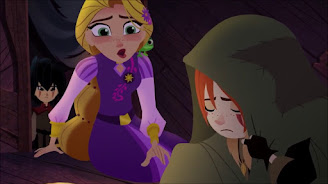 Rapunzel serves as a good supporting role almost acting in a big sister role to Catalina and telling her that what she is going through is okay and it doesn’t make her a monster. Rapunzel is willing to do everything in her power to help her young friend. 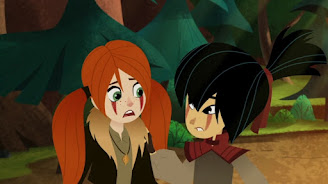 Angry had always been presented as the one in charge and the one that made decisions for the sisters every time we saw them.  This episode shows why she may have meant well, how that can feel demoralizing to someone you love if you don’t let them speak up for themselves. I don’t think she’s a bad character but she is a kid and she is still learning and growing and that is the most important thing that any kid can do. 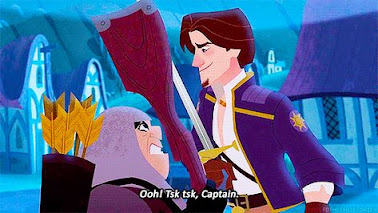 I do not like this character but I believe that was the point as she was someone that was so set in her ways and didn’t care when it was revealed that the werewolf was a young girl.  All she cared about doing was her job and that is taking out the werewolf. Never mind the fact, that Rapunzel kicked her out and said they wouldn’t be requiring their services rather early in the episode.

I really enjoy this episode and how it uses the idea of werewolves to say that it’s okay to be angry and to speak up for yourself. It’s not something that I’ve seen done before but I really appreciate it.