I was inspired to post this after watching Nostalgia Critic’s latest video featuringÂ  Dante Basco. Mainly the ending, and as someone who loved this show. I enjoyed the final joke. 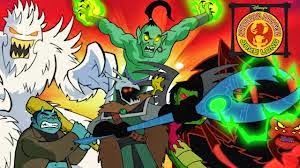 Hello & welcome back to A Look at Disney. One of my favorite Disney Channel shows is American Dragon: Jake Long. I reviewed one of the best episodes back during my Dragon Week event as I took a look at the episode that introduced the number 1 thereat to the magical world. For those of you don’t know, American Dragon followed the exploits of Jake Long aka the American Dragon, the first American Dragon as he trains to serve and protect the magical world from any serious threat and like most superheroes, he has to keep his powers a secret. In many ways, Jake Long is Disney’s Spider-Man. In that, he doesn’t have an easy life but takes things in stride. Maybe, I’m stretching it a bit with that parallel. Oh, and I should mention that Jake is voiced by Dante Basco best known to you guys as Prince Zuko from Avatar: The Last Airbender or for my older readers, Rufio in Hook. 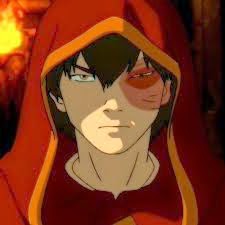 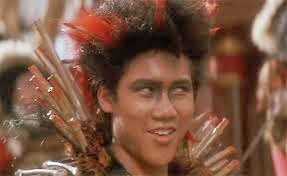 And today, I’m going to take a look at some of my favorite villains from the world of American Dragon: Jake Long because just like KP, this show had some great baddies but unlike Kim Possible, this show doesn’t seem to get the love that the KP baddies get from Disney Channel fans of the ’00s. With this long-winded introduction out of the way, let’s begin.

Coming in at # 6 are The Gorgon Sisters. Three magical sisters, Fury, Euryale, and Medusa. In ancient times, they ruled all magical creatures with an iron fist until a hero used his shield as a mirror and they were turned into stone until they were accidentally awakened. And from that, you can figure that they can turn anyone into stone and they can also mind control. As you can see, they appear as thin, tall, and beautiful and they use that to their advantage to get their way. They kinda remind me of sirens in how they are deadly but dangerous. They were fun to watch and while they may not be as powerful or deadly as some of the other villains on this list, they can still hold their own in a fight and going back to the mind control, they were to use that an entire team of cheerleaders that included Jake’s friend, Trixie who joined as an undercover sting and used them to do their bidding.

But Trixie was able to break free of their hold. and stood up to the Gorgon Sisters. 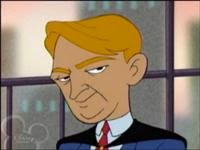 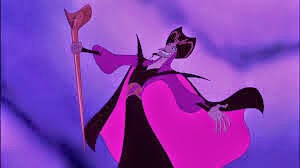 The best way to describe Pandarus is saying that he’s an evil Donald Trump. Oh wait, that’s a bit of an oxymoron. Seriously, I swear that Pandarus was based on Trump. He’s called The Wizard of Wall Street for crying out loud. Tell me, I’m not the only one that sees this. He really changed over his appearances in the first season, he was a bit of a wuss but in the second season, he becomes more and more ruthless and willing to do whatever it takes to get what he desires such as killing. All this so, that he can be the most powerful magical being. Again, I find the best way to describe him is that he’s an evil Donald Trump. 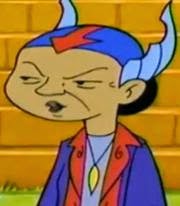 Coming in at # 3 is Chang. She is a former member of the Dragon Council that in secret had been for years working for The Dark Dragon and was able to keep this a secret and almost ensured her master’s victory and it seemed that The Dark Dragon was the only one that she was truly loyal and as mentioned just like Jake, she is too a dragon. And here’s her dragon form from season 2.

And she was more than willing to betray the person she loves, Lao Shi. Jake’s grandpa to get ahead and get what she wants. 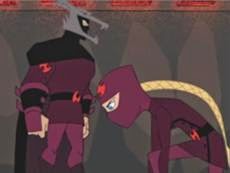 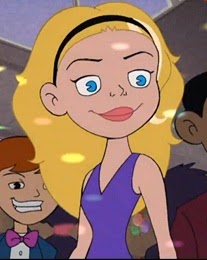 Rose/Huntsgirl is voiced by Basco’s Avatar costar , Mae Whitman aka Katara and more recently, April (the Best April) on the Nick Ninja Turtles and within Disney, she plays Tinker Bell.

It’s interesting looking at all of these characters that Mae Whitman has played as they are sweet women that are also tough and very strong and you do not cross them and that is also Rose but as The Huntsgirl. Ooh boy, is she ruthless. Raised from birth by The Huntsclan, she was raised to hate all magical creatures and show no remorse in killing any magical beings as The Huntsclan believed the human race to be the superior race, these were all teachings from her “uncle” and hated The American Dragon. Which made things complicated for Jake and Rose, at first as neither knew of each others’ secret lives at first and that in a way, it made very fun to watch because as Jake and Rose, they were friendly and caring towards each other but as the American Dragon and Huntsgirl, they were tough on each other and showed no pity in fighting each other. Eventually, Jake did learn Rose’s secret and they had to keep their relationship a secret and that only made things harder on them and tested their relationship.

One of the biggest reasons, I like The Huntsgirl is because of the conflict she goes through as both Rose and The Huntsgirl. Especially in the second season, where she has to keep up the facade that she still hates all magical beings, while that isn’t true and the contrast between both Rose and Huntsgirl. They may be the same person but they don’t have the same personality. Rose is sweet innocent and caring but Huntsgirl is ruthless, vicious and loyal to The Huntsclan as she was raised to be believe the lies, that they fed her. And when she found out the truth about her past, it was a bit heartbreaking that she was stolen from her family at birth because of her birthmark that is shaped like a dragon and that in part is what makes me like her so much because while you can easily like her as Rose, as The Huntsgirl, she was not the same character at all and Mae Whitman did a fantastic job of selling both sides of this character and sometimes made me forget that they were one in the same because when Rose put on her Huntsgirl uniform, she wasn’t Rose anymore. 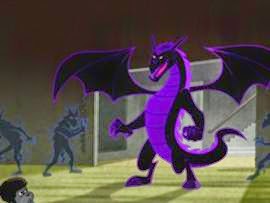 Coming in at # 2 is The Dark Dragon voiced by Clancy Brown. The Dark Dragon is considered the number one threat to the magical world. His origins are unknown but he is the first dragon to turn evil and one of the only dragons, we never see in human form. He wished to destroy humans and take over (not going there) as he viewed them as inferior and saw magical beings as being superior and went to great lengths to get what he wanted and besides having all the abilities of a dragon, he could also use dark magic and before Jake, only one other person had ever faced the Dark Dragon and lived. Jake’s grandfather. Even though, he is the biggest threat on the show and really awesome, I just feel that my number one choice is more interesting 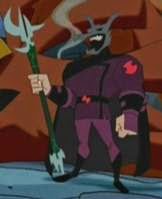 Coming in at # 1 is the only character to have appeared on a previous list. If you’ll recall my Top 6 TV Villains list from Halloween, he came in at number 1. Voiced by Jeff Bennet, I give you The Huntsman . I pretty much summed up what I had to say there in that article and for a refresher, here ya go.

The Huntsman is one of the most ruthless, and cunning and is considered the 4th most dangerous threat to the magical community. He is the leader of the Huntsclan and has no issues killing any magical creatures or any humans that ally with magical creatures. And he has killed in the past, you see the dragon skull, he wears as a helmet. That is from a dragon he killed and he wears it as a trophy. By the way, in this show’s universe dragons are actually people that have been given the ability to turn into dragons. So, he basically killed a human with no remorse. Dude, that’s creepy. He’s also extremely bitter towards dragons and I attribute this to when the main hero, Jake Long traveled back in time and humiliates a then young geeky and gawky and scrawny Huntsman. Also, he kidnapped his “niece”, Rose (the show’s love interest and Huntsgirl (who btw can kick but)) from her real family, when she was first born because she had the mark of the Huntsclan

What I said in that excerpt last October holds up, this guy is just ruthless, cunning, manipulative, has no remorse for anyone and like all the villains on this list will do whatever it takes to ensure his victory. There honestly isn’t too much more that I can say about him other than he is awesome and you knew when The Huntsman showed up, there was going to be serious trouble. He and The Dark Dragon are two of the creepiest Disney TV villains ever.

I hope that you’ve enjoyed this list. one thing that the American Dragon villains have over the KP villains is that they are all serious threats that if you took lightly, would get you killed and my top 2 are prime examples of that. These are baddies that you do not write off. If you’ve never seen American Dragon: Jake Long, I highly suggest it because behind Kim Possible, this is easily the best animated show to ever air on Disney Channel and these villains are a great example of what this show had to offer. Peace!